Marvelous Middle Grade Monday was created by the inimitable Shannon Whitney Messenger, and even when she's busy elsewhere, a growing number of us carry on!  Check out these amazing blogs: Shannon O'Donnell,  Brooke Favero, Ben Langhinrichs, Sherri Peterson. 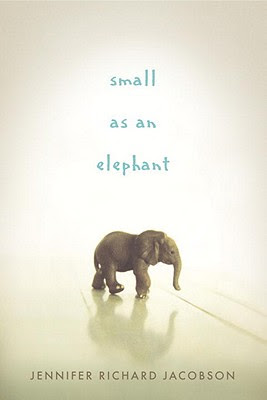 Jack's mother has always been unpredictable, especially when she's off her meds (she appears to be bipolar, but it's never labeled).  He loves her and he knows she loves him, but sometimes she acts wild and impulsive.

So he's not totally surprised when he wakes up alone at their campsite in Acadia National Park in Maine.  They had argued the night before about something Jack wanted to do on this vacation.  Jack covers for her and pretends she's just taken the car to get medicine.  He manages to fool the park rangers and the friendly family nearby.  But he can't find his mom anywhere in the park.  He looks for her in Bar Harbor (and if you've ever been there you'll recognize familiar tourist sites like Cool as a Moose and Sherman's Bookstore!).


Jack is 11 years old and totally believes what his mother always told him: his grandmother is evil.  He doesn't want the authorities to swoop in and take him to live with this grandmother he doesn't remember.  He's young and innocent enough that he doesn't realize at first that the entire state of Maine is searching for him.

He decides to start walking home to Boston, even with no money and only a small elephant toy to keep him company.  Jack is obsessed with elephants and knows every fact about them.

This lovely story is a wonderful example of the slow reveal.  You don't learn until about two thirds of the way through the book what Jack and his mom argued about, but it's central to the plot and would be a spoiler if I mentioned it here.  Let's just say it gives Jack a reason for his journey on foot and you find yourself cheering him on, hoping he makes it to his goal before the authorities find him.  He meets friendly people all along the route and manages to earn or find enough to eat, so I don't think it's too scary for younger readers.  (Note: the ARC says it's for ages 10 to 14, but I wonder if a 14-year-old really wants to read about an 11-year-old boy.  I wish the author had made Jack 12 or 13 instead, but then some of his choices might have been different.)

What middle grade marvels have you read recently?
Posted by Joanne R. Fritz at 3:09 PM