Marvelous Middle Grade Monday was started by the inimitable Shannon Whitney Messenger.  Of course, you can also find a MMGM post at Shannon O'Donnell's blog.  And this week,  be sure to welcome Ben Langhinrichs, who pays tribute to Eva Ibbotson, and Brooke Favero, who talks about The Mysterious Benedict Society. 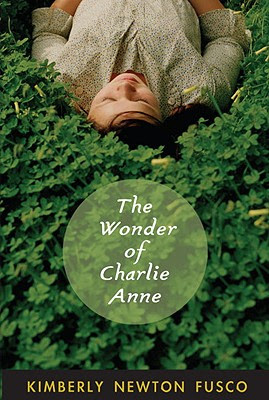 Like Tending to Grace, (which I reviewed here) this is a quiet book you may have overlooked when it pubbed last August and a hundred noisier books were clamoring for your attention ("Read me!"  "No, read ME!").  It's also aimed at a younger audience than Kimberly Fusco's first book, which was YA.  The Wonder of Charlie Anne is firmly Middle Grade, and the kind I love -- historical fiction that's as fresh as any contemporary novel, with a main character you can cheer for.

Charlie Anne (real name Charlotte Anne) lives on a farm in Massachusetts during the height of the Depression. Mama died in childbirth along with Charlie Anne's youngest sibling. So Mama's dour cousin Mirabel moves in to help with all the chores and children.  When Papa announces he and Thomas, the oldest of the five siblings, are going up north to build roads for President Roosevelt, Charlie Anne is devastated.

The trouble is, Charlie Anne doesn't get along so well with Mirabel.  Mirabel struggles to make a lady out of her and constantly reads to her from a book of manners. Charlie Anne can't read -- the letters get all jumbled up -- and she was glad when the local school closed for lack of a teacher.  But Mirabel seems to have it in for her. Charlie Anne gets stuck doing all the chores, while Ivy reads movie magazines and little Peter and Birdie play. Charlie Anne is a delight of a character; she's messy and clumsy and easily distracted -- she hears the swing calling her, or the river.  She talks to the cows and the chickens as if they can understand her. She rarely gets her chores done, but she loves her little brother and sister and she can make a mean vinegar pie.

Then a new girl moves in next door. Charlie Anne is eager for a friend her age.  But Phoebe is black, so Mirabel won't allow Charlie Anne to play with her, even though Phoebe can read much better than Charlie Anne and can sing like an angel.

If you liked Moon Over Manifest, this year's Newbery winner (you can read my review here), also about a motherless girl during the Depression, this book should appeal to you. You may even find this more accessible, because it's a straightforward linear narrative, with an absolutely irrepressible main character. The Wonder of Charlie Anne also reminded me of Words in the Dust (reviewed in this post), because the relationship between Charlie Anne and Mirabel is as complicated as the one between Zulaikha and her stepmother. And of course it also deals with prejudice.

What marvelous middle grade novels have YOU read?
Posted by Joanne R. Fritz at 4:38 PM