Are you ready? No, I'm not talking about Halloween so much as next week (although I think I still have some candy left around here). I don't know about you, but I'm soooo ready for this most bizarre of all US Presidential elections to be over.

Why can't we handle our elections the way Great Britain does and have it all finished within a few months? Better yet, the way Australia does -- in six weeks. Both countries also limit campaign spending. Isn't it high time we did the same?

And speaking of six weeks or a few months, I'm taking a blogging break. Probably for all of November and December. So sorry to miss reading your blogs but I need some time off.  I'm way behind on my writing and reading, and something has to give. I also want to start querying my novel in verse and I need to get cracking on stalking researching agents.

See you on the other side!

THE INQUISITOR'S TALE by Adam Gidwitz 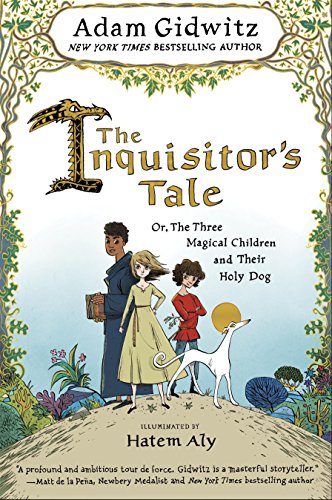 The Inquisitor's Tale (Or, The Three Magical Children and Their Holy Dog) by Adam Gidwitz, illuminated by Hatem Aly (Sept 27, 2016, Dutton Children's Books, 384 pages, for ages 10 and up).

Synopsis (from the publisher):  1242. On a dark night, travelers from across France cross paths at an inn and begin to tell stories of three children. Their adventures take them on a chase through France: they are taken captive by knights, sit alongside a king, and save the land from a farting dragon. On the run to escape prejudice and persecution and save precious and holy texts from being burned, their quest drives them forward to a final showdown at Mont Saint-Michel, where all will come to question if these children can perform the miracles of saints.

Join William, an oblate on a mission from his monastery; Jacob, a Jewish boy who has fled his burning village; and Jeanne, a peasant girl who hides her prophetic visions. They are accompanied by Jeanne’s loyal greyhound, Gwenforte . . . recently brought back from the dead. Told in multiple voices, in a style reminiscent of The Canterbury Tales, our narrator collects their stories and the saga of these three unlikely allies begins to come together.


Why I recommend it: A medieval story that's still quite timely. It speaks volumes about the way we treat each other today. It's also one of the most unusual MG novels I've ever read. You'll find yourself so caught up in the story and so curious about where this is leading that you'll want to put off tasks and cancel appointments just so you can keep reading. (Not that I, coughcough, did those things...)


Favorite lines: There are so many! It's a very quotable book. Randomly picking one:  "William always admired the Italian boys' way of looking up from under their eyebrows that was either totally respectful or utterly disrespectful, and you could never tell which." (from p. 35 of the advanced reading copy)

Bonus: It's illuminating as well as entertaining. You'll learn a lot about thirteenth-century France. Adam Gidwitz spent six years researching this novel and it paid off beautifully.

For another take on this book (and a fun interview with the author) visit Middle Grade Mafioso's post from October 3, 2016.

And the winner of TIME TRAVELING WITH A HAMSTER is...

I'm happy to announce that according to randomizer, the winner of the hardcover copy of TIME TRAVELING WITH A HAMSTER is...


Congratulations, Patricia! Expect a message from me asking for your mailing address.

Exclusive Interview with Ross Welford, author of TIME TRAVELING WITH A HAMSTER -- and a Giveaway!

Time Traveling With a Hamster by Ross Welford (Schwartz & Wade, 2016)


Ross Welford, author of Time Traveling With a Hamster, kindly agreed to answer three questions for My Brain on Books.


1) Your time travel rules make so much sense I actually believed time travel was possible. How did you come up with these rules?

Thank you for noticing!  Time travel is - I discover - a nightmare to plot, so it’s nice to hear I got it right.  The main thing I had to invent was “Dad’s Law Of Doppelgängers” - the rule that states you can occupy a bit of space-time only once.  This came from necessity, really.  Let’s say you have a time-machine and, like Al, you go back in time and create a big disaster...  (I’m being careful with spoilers here: if you’ve read it you’ll know what I mean).  So what’s to stop you getting back into your time-machine, and travelling back in time again and putting it right?  I’d end up with a sort of time travelling Groundhog Day.   I did not want Al to be able to do that.  There was another thing in my mind as well, and that was Back To The Future.  I love those films, but I wanted to avoid too many similarities.  I’m especially thinking of the scene where Marty sees himself playing guitar at the school dance.  I did not want Al to meet himself.  (Why not?  Dunno, just didn’t.)  Out of that grew the doppelgänger ‘rule’ and once I’d worked it out, it actually kind of made sense!  Time travel is, obviously, a fantasy - but I think it’s quite a powerful fantasy, and it was fun to try to make it seem real, if only for the duration of the story.

2) This is your debut novel and I'm most impressed. Tell us briefly about your writing journey. Were there other (unpublished) books you wrote along the way? How did you find your agent?

About seven years ago I studied part-time for an MA in Screenwriting.  Until then I had written virtually no fiction ever.  Screenwriting’s a hard gig, though, and I did nothing with the MA I gained.  So in 2013, I started a story about a kid who finds a time portal in a cupboard at school.  Then I stopped at about 20,000 words, stuck on where to go next.  My local adult ed center was running a course based on NaNoWriMo, the writing club that hauls you through a 50,000 word draft in a month.  That was November.  After a couple more drafts, by spring 2014 it was the story we now have, more or less.  Different title, different ending, but still…

So, I knew that I had to start sending it out there, but I knew no one in publishing and sent out about four and then...  A friend at a party said that he happened to know someone who worked at the literary agency Peters, Fraser & Dunlop (I had never heard of them, knowing next to nothing about publishing). So I sent it off and waited, and waited, and waited….  And then things happened very quickly.  In December, I received a call from Silvia Molteni from PFD who took me on as a client straight away, and about three months later I had a two-book deal with Harper Collins, UK.  Shortly after that, it was sold to the US. (Schwartz & Wade, Penguin Random House).  A second book, What Not To Do If You Turn Invisible will be out in the UK early 2017.

(And an aside here to fellow writers:  I do realize that this is far from typical and that I have been very fortunate.  Sorry!)

3) You're right, Ross. That's far from typical! But congratulations! Now, could you briefly describe your writing space? Was it plastered with charts and timetables a la A Beautiful Mind while you were writing TIME TRAVELING WITH A HAMSTER?

Early on, I did try plotting with yellow post-its arranged on a large glass door, and then I tried color-coding for when the action was in 1984!  It just got in the way though, and I found I didn’t need it. Quite a lot of Al’s adventures were unplanned - inasmuch as I didn’t know when I started writing the book that he would get into the scrapes he does.  Instead of post-it notes, there were lots of scribbled notes with arrows and crossings-out.  When I submitted the final draft, I was certain there were no errors in the timeline.  The editors found two - thankfully easily fixed.  Hurrah for copy editors!

They certainly did a great job. Thanks for stopping by, Ross.

Giveaway details: The publisher has generously offered one hardcover copy for a giveaway. To enter, you must be a follower of this blog and you must comment on this post. If you mention this giveaway on social media, please let me know and I'll give you extra chances. This giveaway is open to U.S. mailing addresses only. Giveaway ends Sunday October 16th at 10 pm EDT and the winner will be announced on Monday October 17th. Good luck!

TIME TRAVELING WITH A HAMSTER by Ross Welford

Synopsis (from the publisher): My dad died twice. Once when he was thirty-nine and again four years later, when he was twelve. On his twelfth birthday, Al Chaudhury receives a letter from his dead father. It directs him to the bunker of their old house, where Al finds a time machine (an ancient computer and a tin bucket). The letter also outlines a mission: travel back to 1984 and prevent the go-kart accident that will eventually take his father’s life. But as Al soon discovers, whizzing back thirty years requires not only imagination and courage, but also lying to your mom, stealing a moped, and setting your school on fire—oh, and keeping your pet hamster safe.

Why I recommend it: Color me impressed. An endearing main character and a clever, engaging plot help make this British import absolutely brilliant. Those opening lines drew me in immediately: My dad died twice. Once when he was thirty-nine and again four years later, when he was twelve. After a beginning like that, how could you possibly stop reading?

Time travel that makes sense is extremely hard to pull off but Welford really thought this through. He must have had charts, maps, and timetables plastered all over his writing office. There's an answer for everything, even the famous "Grandfather Paradox" of time travel. You'll be amazed what happens in this humorous and touching tale. Al (along with Grandpa Byron, the coolest grandfather ever) is a character you'll grow to love. And yes, the hamster has an important role to play.

Reading this turned my weekend into a fun escapist mini-vacation.

Bonus: Stay tuned next week for an exclusive interview with Ross Welford and a giveaway!