Middle Grade Heaven -- Seven debut authors from the Lucky 13s in one room! Plus a GIVEAWAY


Last week, I had a blast meeting seven middle grade debut authors at once. Yes! I made it to the last stop on the Lucky 13s VENTURES AND MISADVENTURES tour! I got quite a few pictures (most were a little blurry because I didn't want to use flash and, you know, blind them all). Thanks to Haverford Township Free Library and Children's Book World for hosting the event. Scroll down for info on the books.


Kit Grindstaff and Kristen Kittscher both said their books were the first they'd ever written,
although Kristen admitted it took many years and at one point she started over!
Here, Kit talks about THE FLAME IN THE MIST while Kristen looks on.

Any of these books would be a great addition to your middle grade shelves. They range from funny to serious and include fantasy, realistic contemporary, and historical.

The Flame in the Mist by Kit Grindstaff (Delacorte Books for Young Readers, ages 9 to 13)
In this darkly-atmospheric fantasy, Jemma Agromond learns she's not who she thinks she is, and when the secrets and lies behind her life at mist-shrouded Agromond Castle begin to unravel, she finds herself in a chilling race for her life. I've recommended this book before, in this post. 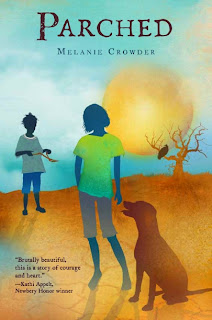 Parched by Melanie Crowder (HMH Books for Young Readers, ages 10 to 14). In this haunting, evocative eco-fable, written in a gorgeous prose that's almost poetic, a boy, a girl, and a dog struggle to survive in a world gone dry. I'm in the middle of reading this one, and I'm taking my time so I can savor the language. I first heard about this book from Akossiwa Ketoglo in this post. 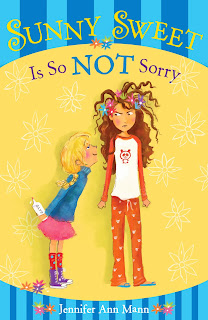 Sunny Sweet is SO Not Sorry by Jennifer Ann Mann (Bloomsbury USA, ages 8 to 12). Eleven-year-old Masha has a six-year-old evil genius for a sister. Most of the action takes place in one crazy day, starting when Masha wakes up with plastic flowers glued to her hair. First in a series! 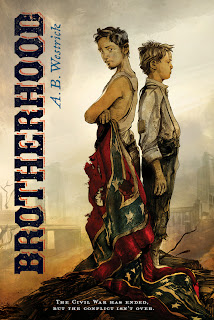 Brotherhood by A.B. Westrick (Viking Juvenile, ages 10 and up). The Civil War has ended, but for fourteen-year-old Shadrach, who lives in Richmond, Virginia, the conflict isn't over. His older brother takes him to a meeting of a secret society whose mission is to protect Confederate widows. But when Shad realizes what the KKK is really doing, he must make a decision. 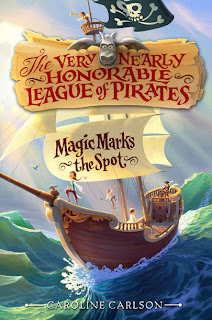 Magic Marks the Spot (The Very Nearly Honorable League of Pirates, Book One) by Caroline Carlson (HarperCollins, for ages 8 to 12). Hilary has always wanted to be a pirate. But the Very Nearly Honorable League of Pirates won't take girls. So Hilary sets out on her own high-seas adventure, with her best friend, a talking Gargoyle. Plenty of shenanigans abound. Read Natalie Aguirre's interview with Caroline on Literary Rambles at this post. 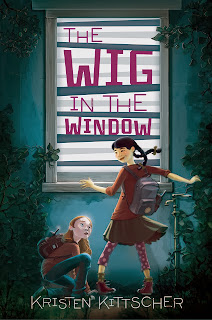 The Wig in the Window by Kristen Kittscher (HarperCollins, ages 8 to 12, first book in a series!)  Sophie Young and Grace Yang are best friends, and spies. Fans of funny middle-grade mysteries will devour this fast-paced contemporary mystery, set in a California beach town.The girls find more than they bargained for when they spy on their neighbor, Dr. Charlotte Agford (aka: Dr. Awkward), the middle school guidance counselor. What is Dr. Awkward hiding? 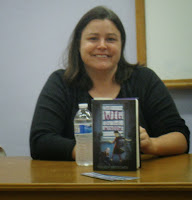 Kristen admitted this book is "somewhat autobiographical" because she had a spy club with her own best friend when she was in school. So the story has a highly authentic feel, as Sophie and Grace sneak around, make accusations, and get in deep trouble.

And the best part is, I'm giving away my signed hardcover copy of The Wig in the Window (only because it's the first book I finished reading)! Plus it comes with a pen, so you can write your own spy notes. To enter, all you have to do is become a follower and comment on this post. International entries welcome. This giveaway ends at 10 pm EST on Sunday December 8 and the winner will be announced on Monday December 9. Good luck!

Don't forget you still have nearly a week to enter my other giveaway, for a hardcover of The Monster in the Mudball. Go to that post to enter.

The Monster in the Mudball -- and a Giveaway!

Synopsis (from the publisher): In this Junior Library Guild selection, eleven-year-old Jin must run around the English town of Newcastle-upon-Tyne trying to track down a monster named Zilombo. Jin teams up with Chief Inspector of Ancient Artifacts A. J. Zauyamakanda, or Mizz Z, for short.

Zilombo gains new, frightening powers every time she hatches. Now the monster is cleverer than ever before . . . and it appears that Jin’s baby brother has disappeared! Will Jin’s baby brother be next on Zilombo’s menu? As the monster’s powers continue to grow, Jin and Mizz Z must find a way to outsmart Zilombo!

Why I liked it: This is a lively, fast-paced, multicultural fantasy adventure. If you can put up with a bit of head-hopping between characters in this brisk, third person narrative, you'll be rewarded with a great tale. Mizz Z is terrific. Jin's older sister Frankie has an important part to play. But mainly, you'll find yourself cheering for Jin -- the first protagonist I've ever encountered who has dyspraxia, a neurological condition that affects coordination. How he handles that, and helps save the day, makes him a fascinating character.

Read a guest post on Lee & Low's own blog, in which the author shares photos of the English town where the story takes place. Interestingly, I read the book before I saw these photos, and it's almost exactly as I pictured it! So you know S. P. Gates is great at evoking a setting. Here's a teaser:


A little about the author (from the publisher's press release): S.P. Gates began her writing career over twenty-five years ago as an English teacher who wrote stories for her classes. One day she decided to send one of her stories in to a publisher and, to her amazement, her story was published. She is now the award-winning author of more than one hundred books for young readers including both middle grade and young adult fiction. Gates drew inspiration for The Monster in the Mudball from her time teaching in Malawi, Africa. Additionally, Jin, who has dyspraxia, is based on the experiences of Gates’ son, Alex, who also grew up dyspraxic. “Other children who have special educational needs might be interested to read how, despite his problems and to his own amazement, Jin becomes a hero,” Gates says.

And yes, I'm giving away that hardcover copy that Tu Books sent me for review. It comes with its very own "egg" from which you can grow your own monster! To enter, all you have to do is be a follower and leave a comment on this post. International entries welcome. This giveaway ends Sunday Dec 1, 2013 and the winner will be announced Monday Dec 2.

I was in heaven on November 1st. Or, more precisely, I was at Children's Book World, in Haverford, PA for their annual Author and Illustrator night.

My only regret (besides the fact that I forgot to take photos - kicking myself, here) is that I didn't have enough money to buy a book from each of the more than 30 authors or illustrators present. And of course there wasn't enough time to talk to all of them.

Also in attendance was my friend Ilene, whose YA deal (as I.W. Gregorio) was just announced in Publishers Marketplace. Yay, Ilene!

(Note: Yes, most of these authors are either YA or PB authors. But never fear, MG champions, because next week, I'm planning to attend a middle grade event sponsored by Children's Book World - you can read about it here! And this time, I'll try to take pics...)

Best conversation of the evening: I told Jerry Spinelli that I just finished the rough draft of my third novel the day before. And I asked, "What advice can you give me?" He said, "First, treat yourself to a milkshake because you've done something most people never do. You've finished a novel."

Then he told me to wait THREE MONTHS before tackling the revisions. As I thanked him and walked away, he said, "Remember! Three months!"

How long do you wait before revising a rough draft? Do you put it away and let it simmer? Or do you dive right into draft two?

Al Capone Does My Homework by Gennifer Choldenko

This week's MMGM is the third in a trilogy that started in 2004 with Al Capone Does My Shirts, continued in 2009 with Al Capone Shines My Shoes and now concludes with another exciting tale from Alcatraz in the 1930s. For other MMGM links, see my sidebar or Shannon's blog.

Al Capone Does My Homework by Gennifer Choldenko (August 2013, Dial Books for Young Readers, historical fiction, for ages 9 to 12).

Source: Purchased from bn.com using the gift card I won from Michael Gettel-Gilmartin. Thanks, Michael!

Synopsis (from Indiebound): Alcatraz Island in the 1930s isn't the most normal place to grow up, but it's home for Moose Flanagan, his autistic sister, Natalie, and all the families of the guards. When Moose's dad gets promoted to Associate Warden, it's a big deal. But the cons have a point system for targeting prison employees, and his dad is now in serious danger. After a fire starts in the Flanagan's apartment, Natalie is blamed, and Moose bands with the other kids to track down the possible arsonist. Then Moose gets a cryptic note from the notorious Al Capone himself. If Moose can't figure out what Capone's note means, it may be too late.


Why I liked it: The character of Moose won me over in the first book, and his voice is just as likable in this volume. Thirteen-year-old Moose wants to do what other kids do; play baseball, run around, avoid homework. But he often has to babysit for Natalie (although Choldenko wisely never mentions the term "autism", since it wasn't used yet in 1936). After the fire, Moose discovers suggestions from Al Capone in a notebook that escaped the flames. I loved the way the author managed to work this in, making it seem like Capone is critiquing Moose's homework. But the information turns out to be far more important than that.