SQUIRM by Carl Hiaasen (yes, it's about snakes, but very funny) 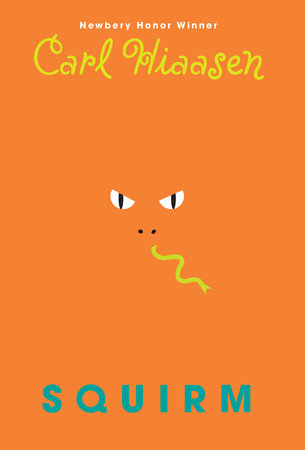 Synopsis (from the publisher):

Some facts about Billy Dickens:
* He once saw a biker swerve across the road in order to run over a snake.
* Later, that motorcycle somehow ended up at the bottom of a canal.
* Billy isn’t the type to let things go.

Some facts about Billy’s family:
* They’ve lived in six different Florida towns because Billy’s mom insists on getting a house near a bald eagle nest.
* Billy’s dad left when he was four and is a total mystery.
* Billy has just found his dad’s address–in Montana.

This summer, Billy will fly across the country, hike a mountain, float a river, dodge a grizzly bear, shoot down a spy drone, save a neighbor’s cat, save an endangered panther, and then try to save his own father.

Why I recommend it:  Like all of Carl Hiaasen's middle grade novels, this is hugely entertaining and hilarious. Billy displays just the right amount of middle-school sarcasm, without being annoying. There are non-stop shenanigans, each wilder than the last. This is exactly the kind of book MG readers LOVE.  And in his slightly snarky way, Billy makes you care about his missing Dad, and about endangered species and other wildlife. You'll learn a lot about Florida wildlife, especially birds and snakes, and--bonus!-- you'll learn just as much about Montana wildlife, like grizzly bears and caracaras. You'll also learn about the modern-day Crow native Americans and enough about quad-copters, or drones, to wish you owned one. They're very cool.

Personally, I hate snakes, but Billy has a healthy respect for them and knows how to handle them properly, leading to his reputation at school as "Snake Boy."

I google a picture of a wild-hog hunter who got bitten by a diamondback over near Yeehaw Junction. That's a real place, you can look it up. The hog hunter's arm is swollen thick as a pine stump. His fingers look like boiled purple sausages. I hold up the phone so that Kyle and his all-jock posse can see the photo.

Kyle goes pale and edges back his chair. "Dude, you are a total psycho."