1.  The voice of the 18-year-old narrator is spot-on.  She's sardonic, smart, sarcastic and very real.  By turns hilarious and heartbreaking, this is a story about a girl desperately trying to survive her senior year in high school by flying under the radar as she always has. But she's barely holding it together because her best friend Charlie has betrayed her and then died in suspicious circumstances.  Suddenly Vera starts seeing him everywhere.  He even talks to her (trying to convince her to go to the authorities and tell what she knows about his death).  He even occasionally talks to us ("A Brief Word From the Dead Kid").

2. If you're a writer, you'll appreciate the the masterful juggling of the non-linear plot.  I don't know how Amy King does this, but it's extremely well done.  She goes back and forth in time, revealing little by little what happened in the past and what's happening now, the week after Charlie's funeral.

3. Have you ever been to Reading, PA?  You'll recognize the setting of this novel (even though she doesn't call the town Reading, so it's a fictional version).  The Pagoda even becomes a character in a few chapters ("A Brief Word From the Pagoda").  If what the Pagoda says is true about the percentage of children who go hungry in that town, it's chilling.

5. Occasional short chapters from not only Charlie and the Pagoda, but also from Vera's father, Ken Dietz, an accountant who thinks flow charts can help you get through life, and who has actually managed to do an all right job as a single dad.  You can see how much he cares about Vera.

6.  Vera is a "pizza delivery technician" and the details about the pizza place are so right, I could  swear I smelled pizza sauce while reading this.  Vera's struggling to earn enough money to put herself through college and she still manages to keep up her grades.  She's tough, she's funny, and you find yourself cheering her on.

9. Treehouses are cool.  Vera and Charlie built one in Charlie's yard when they were younger and Charlie was basically living in before he died.  And there's a secret hidden in Charlie's treehouse.

Bookseller rant of the week:

What on earth makes people think it's okay to bring toddlers into the children's department of a bookstore and let them and their new teeth loose on the toys and books?

At least I'm not the only person who grumbles about this. Eugenia Williamson of The Boston Phoenix started her October 13th article about careers in the book industry with this wonderful quote:

"Some people visit bookstores so their children can chew objects outside the home."

Yay, Eugenia!  Your sarcasm hit the nail on the head.


This definitely calls for Teeth Are Not For Biting -- a board book by Elizabeth Verdick, published in 2003 by Free Spirit Press.  Other titles in the series include Feet Are Not For Kicking and Germs Are Not For Sharing, also by Verdick, and Hands Are Not For Hitting, by Martine Agassi.

Have you noticed a distinct lack of manners among little kids these days? Do you think books like this help, or do you think parents need to step up?
Posted by Joanne R. Fritz at 9:46 AM No comments:

Come a little closer. I'm embarrassed to say this too loud.

Lean in a little so I can whisper it.

Okay, that's better.  You see, um, I have this embarrassing secret.  I mean, it's pretty bad for a Children's Bookseller who's read, like, over a thousand books, and is supposed to be an expert on the books she sells.

Devoured plenty of other classics, like The Secret Garden and The Jungle Book, and more modern classics like Charlotte's Web and The Phantom Tollbooth and The Giver. And lots of contemporary books that are destined to become classics. Books like Savvy and When You Reach Me and Maniac Magee.

But I've never read Anne of Green Gables.  In fact, when librarian Betsy Bird of Fuse #8 Productions over at School Library Journal announced the Top 100 Children's Novels of All Time in April of this year (and, hey, keep checking her website because she's bound to do a YA poll starting possibly in February 2011),  Anne of Green Gables was the only one of the top ten books I hadn't read.

I had a customer last week who wondered if it would be a good choice for her granddaughter who likes historical fiction. She asked me point blank what I thought of it.  So what could I do?  Heh heh (*cringes*).  I nodded and smiled and said, "Oh, sure, that's a great choice for your granddaughter."  (Did you notice how I worded it so I didn't actually say I'd read the book?  Sneaky of me, eh?)

Go on.  Admit it.  There's at least one classic of Children's Literature that YOU'VE never read. Right?  So tell me. What is it?  And do you think you'll ever get around to reading it?
Posted by Joanne R. Fritz at 8:11 PM 6 comments:

Can you make a living writing books? 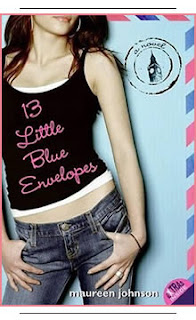 I was going to post about something entirely different today (it being 10/10/10 and all), but then I read the hilarious Maureen Johnson's post from Friday about whether or not it's possible to make a living writing books.

Maureen is the author of one of my favorite YA books of all time, 13 Little Blue Envelopes (and I'm excited to learn from her website that a sequel is arriving in May 2011).

I have to quote this passage from her Friday post that made me snort:

The reality is that the VAST MAJORITY of book writers do not make their living solely from writing books. The reality is that many advances are small, and you only write so many books in a lifetime (with the possible exception of V.C. Andrews, who has written over sixty books since her death as opposed to the six or so she wrote while alive, which is VERY IMPRESSIVE WORK).


Well, actually there were lots of passages that made me snort.  Go read it.  No, wait!  Come back. There's a question below:


Are you an as-yet-unpublished writer like me? Do you think you'll ever make a living writing novels?  Or even nonfiction?


Has the golden age of the picture book for children passed?
Wow.  Not a good time to be writing picture books?  Shelf Awareness goes on to quote a New York Times article  which suggests not only that the economy is at fault, but also that picture books are no longer being purchased by parents who want their kids to read "big-kid" books at increasingly earlier ages.
I see this as a disturbing trend.  Picture books have always been and will always be enjoyed by kids and parents (or grandparents) together.  There should still be several years of picture book enjoyment between the board book and the Early Reader.  Sometimes there's nothing more comforting than snuggling on Mom or Dad's lap while being read to.
Of course, the New York Times article also goes on to say:
"...perennials like the Sendaks and Seusses still sell well — but publishers have scaled back the number of titles they have released in the last several years, and booksellers across the country say sales have been suffering."
I guess I'm lucky to work for a bookstore which still sells oodles of picture books (and not just Seuss and Sendak) to parents, grandparents, teachers, librarians, and others who appreciate them for the stories and the artwork.  Yes, we sell fewer than we did five or ten years ago.  But they still sell.

Case in point:  the new David Wiesner book is called ART & MAX (Clarion Books, Oct 2010).  And it's sheer genius, just like Wiesner's other books.  The Caldecott committee may as well just hand him the medal now!
Will picture books survive?  The article doesn't even mention the looming spectre of the e-book, but it seems to me that picture books are one genre that still need to be produced as physical books you can hold and share with a child.  What do you think?
Posted by Joanne R. Fritz at 9:22 PM 6 comments:

Okay, I think I finally got a handle on this new page tab thingie.  If something isn't working, will someone please let me know?  Trying to spruce up the blog and give it a new look.

Just read a great middle great adventure story... about RATS!  Yep, that's right.  Normally, I would never go near a book about rats.  But this is packed with excitement and suspense and some memorable characters, who, well, just happen to be rats.

It's also the debut novel of a fellow blogger, Hilary Wagner.  And I think it's no coincidence that the cover boasts a blurb from Rick Riordan.  Just like THE LIGHTNING THIEF and the other Percy Jackson books, NIGHTSHADE CITY (Holiday House, October 2010, ages 9 and up) starts with action on the very first page.   There's none of the boring background information so many novelists feel they have to force on us.  Vincent and Victor Nightshade, orphaned brother rats in an underground city of rats, are on the run from the High Minister's nasty lieutenant, Billycan.  They find refuge with a group of rebel rats who knew their father. There will be strategy and conniving and lots and lots more action.  There's even a cute and clever girl rat named Clover. And I must add my deep appreciation for the character of Mother Gallo, an older female rat who has an important role to play in the upcoming battle.

If you're a fan of the Redwall series or other animal fantasies, you should burrow into this book.  Look for Nightshade City at your local indie bookstore.