*NOTE: This post originally appeared on April 4, 2016. It occurred to me today that it was strangely prescient, since my fifth novel became EVERYWHERE BLUE, which is due to be published by Holiday House in Summer 2021.*

Musings on writing my fifth novel

You read that right. I'm nearly finished writing the rough draft of my fifth novel. In the past nine years, I've written four MG novels and one YA, in addition to more than a dozen picture books. And no, in case you're wondering, I don't yet have an agent or a book contract. I've had fourteen publication credits to date, but they're all poems or flash fiction or micro fiction for adults.

Still, I keep writing for children and teens. Perseverance is my mantra.

But I have to admit, Novel #5 is, well, a little different. In what way?

I started an idea notebook for my fifth novel back in the late spring of 2015, so nearly a year ago. After gathering ideas, and working out character sketches and a setting and a conflict, I wrote three chapters. Almost immediately, I became stuck. Something didn't feel right about it. So I put it aside and revised my fourth novel instead.

And then, in September, after reading Full Cicada Moon by Marilyn Hilton (even though it wasn't the first verse novel I read), I had an epiphany.

This new novel? The one I was stuck on? It was meant to be written in verse.

I spent two months reading and studying verse novels and then in November 2015 I started writing Novel #5 all over again.

Am I crazy? Well, this doesn't feel crazy. It feels... right. Since making that decision, the process has changed for me. Writing a verse novel is the hardest thing I've done as a writer, but at the same time, it's like I've grown wings. I look forward to writing every day, which is something I never did with a rough draft before. Rough drafts are usually agony.

I've been accepted into the Highlights Foundation workshop on Novels in Verse which will take place in May. Who knows where this will lead? Maybe nowhere. But maybe, just maybe, something good will happen.

For the rest of April, in honor of Poetry Month, I'll be looking at a few of the verse novels I've studied in my quest to learn this new (for me) form.

Over the past few years, I've read, in approximately this order:

Out of the Dust by Karen Hesse
42 Miles by Tracie Vaughn Zimmer
May B. by Caroline Starr Rose (this made me first fall in love with verse novels)
Pieces of Georgia by Jen Bryant
The Surrender Tree by Margarita Engle
Impulse by Ellen Hopkins
Because I am Furniture by Thalia Chaltas
Where I Live by Eileen Spinelli
Another Day as Emily by Eileen Spinelli
Full Cicada Moon by Marilyn Hilton
Blue Birds by Caroline Starr Rose
The Crossover by Kwame Alexander
Home of the Brave by Katherine Applegate
Inside Out & Back Again by Thanhha Lai
Libertad by Alma Fullerton
Mountain Dog by Margarita Engle
Make Lemonade by Virginia Euwer Wolff
Love That Dog by Sharon Creech

(I've also read Brown Girl Dreaming by Jacqueline Woodson, which is actually an autobiography, and The One and Only Ivan by Katherine Applegate, which some consider prose poetry.)

What verse novels do you recommend? All suggestions are welcome.
Posted by Joanne R. Fritz at 7:26 PM 4 comments:

I've decided to take a break from the blog (and most social media) for the rest of July. And yes, I realize it's a privilege to be able to take a break. There are better people than I am out there continuing to fight against racism, police brutality, and the climate crisis. In addition, as I write this, currently 40 out of 50 US states are experiencing a surge in coronavirus cases. Wear a mask, people!

I'll still be keeping the journal in my notebook, but won't be posting about it here.

Delaware's governor, John Carney, announced he was closing the beach bars for the July 4th weekend. Delaware (not far from me) will remain in Phase 2 of reopening. Pennsylvania is in Phase 3, but we're one of those 40 states experiencing a surge, mostly in the Pittsburgh area and in Philadelphia.

“You can’t have a healthy economy unless you first have a healthy community, so let’s do the work we need to do together — not just the governor, not just me but all of us, to make sure we’re wearing these masks, we’re physically distancing, we’re going out, getting tested at one of the COVID-19 testing sites,” New Castle County Executive Matthew Meyer said.

Also today, I went to the dentist. This checkup and cleaning had been put off since February (I had a cold and after that the pandemic started...). It's a lovely feeling to have clean teeth again. Everyone on the staff wore full PPE, which relieved my mind, and I wore a mask right up until I sat in the chair to have my teeth cleaned.

My dental hygenist (who's been cleaning my teeth for at least 15 years) was thrilled to hear about my novel. 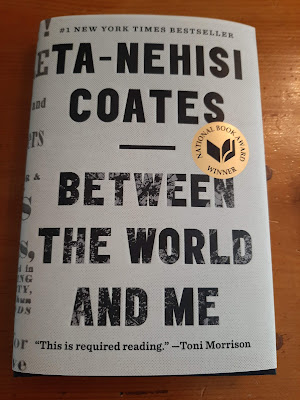 Written as a letter to the author's 15-year-old son, this National Book Award Winner for nonfiction is a beautifully-rendered account of what it's like growing up Black in America. Gorgeous, somber writing, and an eye-opener for any white reader who may not understand what it's like for young Black men (and women) just to go out of the house, to be prepared for anything they might encounter.

A deer got into our Accidental Garden last night and ate the top half off all our tomato plants and pea plants, just after they'd finally grown flowers and were even starting to sprout vegetables! We'd eaten a few tiny peas, but they really needed to grow more. 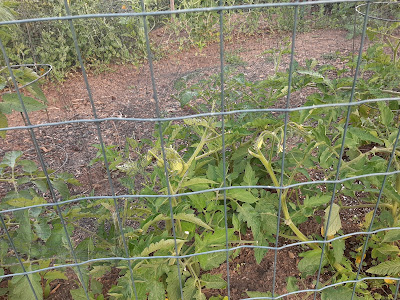 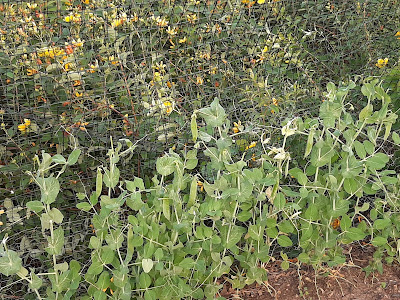 My husband added more deer fencing to the garden. Previously, the taller deer fence only covered half of it, and shorter chicken wire had covered the far end, which is probably how the deer managed to get in (and out) of the garden in the middle of Tuesday night. We're hoping this will keep them out for good!

I really felt sorry for my husband. This has been his project more than mine, since the spruce tree blew over in that windstorm April 30th. He was devastated, and it was a lot of work putting up all that fencing. I offered to help but he insisted he could handle it. 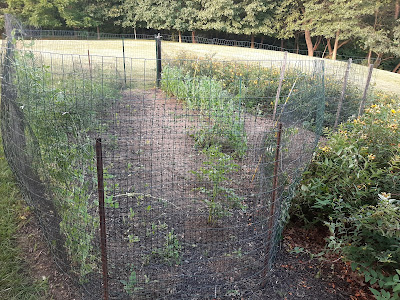 The world now has more than half a million deaths from this horrible virus. Stay healthy. Stay safe this holiday weekend!

Have you been tested yet?  And what are you currently reading?