"Because I Have a Voice!"

Many book bloggers (and I include myself) seem to talk mostly about the newest, hottest books.  Can't blame them.  But I think it's important to occasionally step back and talk about books from years ago, especially the quiet ones, the books that might not have received a lot of buzz, the books that aren't filled with action and explosions and kids with special powers but are still, amazingly, in print. 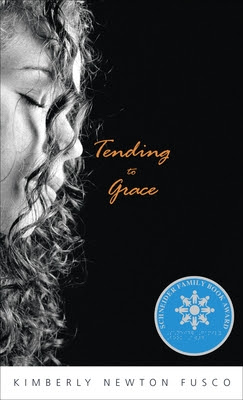 Tending to Grace by Kimberly Newton Fusco (Knopf, 2004, for ages 12 and up) is one of those quiet books.  It didn't make a certain online magazine's list of Top 100 YA Books for Feminists.  It didn't get a lot of buzz when it was published.  But it did get starred reviews in respected journals and received the Schneider Family Award in January 2005.

I pulled it off my shelf and re-read it today because I've just read the author's newest book and I'll be blogging about that on Monday.

So what's Tending to Grace about?

Well, if you've seen The King's Speech (and I hope you have, because it's the best movie I've seen in years, and not just because of Colin Firth!), you know the film delves into the life of King George VI, who happened to be a stutterer.

I want to emphasize this exchange between Bertie and Lionel:
"Listen to me!  Listen to me!"
"Why should I waste my time listening to you?"
"Because I have a voice!"
Cornelia, the 14-year-old protagonist of Tending to Grace, also stutters.  She can't even say her own name.  But she's not royalty and no one's ever offered her speech therapy.  Dropped off by her mother at the crumbling farmhouse of eccentric Great-Aunt Agatha, Cornelia the city girl has to get used to a new way of life -- and the fact that her mother abandoned her there.  She loses herself in books and refuses to speak at all.  But no-nonsense Aunt Agatha won't accept her silence.  She knows Cornelia has a voice.
This slim novel is written in prose so strong and lyrical it sings. It's a luminous, lovely and quiet story that speaks to your heart.
What quiet novels (MG or YA) have YOU read recently?   (And what did you think of The King's Speech?)
Posted by Joanne R. Fritz at 10:49 PM