"You can't think all your memories at once or your head will burst."

Oh, this is such a lovely story and so beautifully written, it hurts that Siobhan Dowd died tragically and too young (age 47) after completing this novel. We'll never know what wonderful novels she might have written. Her first novel was A Swift Pure Cry. She also wrote The London Eye Mystery.

In Solace of the Road, we meet Holly Hogan, a foster kid in London who is so full of anger that her caseworker has to teach her to kick the mattress instead of breaking things. With masterful plotting, Dowd doesn't reveal the heartbreaking reasons for Holly's anger until near the end of this road trip story.

Holly's 14, almost 15, and hates her new school and her new foster family. Fiona and Ray mean well, but they talk too much and ask too many questions. They wanted to have kids of their own, but couldn't because Fiona had ovarian cancer.

When Holly finds Fiona's blond wig in a closet, she puts it on and realizes she looks older in it. Old enough to go on the road, to leave London and hitch rides all the way to Ireland. What's in Ireland? Her real mother. The one she lived with when she was little in an apartment building Holly calls the sky house.

This amazingly-crafted novel, disguised as a simple road trip story, is actually about the tricks your brain can play on you as you sift through childhood memories. On the road, Holly meets a variety of eccentric and sympathetic characters, including a vegan truck driver, a night nurse and a pig farmer. In talking to them, Holly begins to dig down through the complicated layers of her past memories and eventually learn what really happened in the sky house.
Posted by Joanne R. Fritz at 9:44 PM No comments:

Over at the First Novels Club, where they do everything with such awesomeness, there's a very thorough recap of the author breakfast on Sunday with Sarah Dessen and Laurie Halse Anderson (who also mentioned us briefly in her blog). 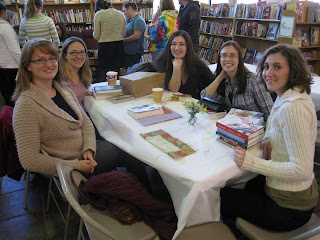 And many thanks for the plug. I'm actually eternally grateful to Frankie for taking all those excellent notes and putting it on the blog, because I certainly didn't have time to take notes. And both authors had some fascinating tales to tell. For instance, they're both married to carpenters. Isn't that amazing? And I loved what Laurie Halse Anderson said about her first drafts. It's good to know that her rough drafts are, well -- what else can I say? -- crap.

Wish I could have gone to Children's Book World too, but I went straight home (after putting away 60 chairs while Cindy handled all those heavy tables -- yeah, Cindy!) and I took a nap.

I'm excited to actually own this: 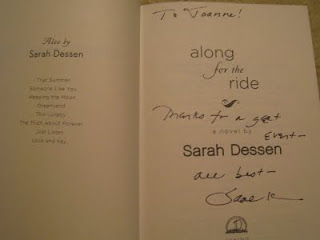 My biggest regret is that I forgot to get Laurie Halse Anderson to personalize my copy of Wintergirls (she was signing someone else's books while Sarah was writing that sweet message above). Then, ahem, I was asked to take pictures for a certain group of bloggers, so I set the book on the podium, and never thought of it again until Laurie had left.

It's okay, though. Both Laurie and Sarah were really nice about signing stock for us, so I exchanged my unsigned copy of Wintergirls for a signed copy.

I read an ARC of Wintergirls months ago but had never had a chance to read Along for the Ride. I'm up to page 175 and enjoying it immensely.

Most important tip from both authors? Turn off the internet while you write. Good advice. So, um, I'm going to go write now.
Posted by Joanne R. Fritz at 8:57 PM 2 comments:

Okay, so I got up very early yesterday, Sunday, November 22nd, and came to work.

Not a morning person. Try to picture this: I was standing there in front of the microphone (public speaking = my number one fear), getting ready to introduce Laurie Halse Anderson (left) and Sarah Dessen (right). Was I still asleep and dreaming?

But it was a very successful event. Laurie and Sarah are two of the coolest and nicest authors I've met. They answered questions for about an hour. And they took their time and spoke with every customer who came up to the signing table. One lucky girl even got a signed dollar bill for being brave enough to ask the first question.

And since I never got around to posting a Gem of the Week last week (Oops. Did anyone notice?), I can now give you two.

GIRLS (Viking, $17.99) by Laurie Halse Anderson is the powerful and chilling account of one girl's descent into anorexia and self-destruction. Lia's best friend Cassie is dead. And Lia is barely holding on. Matchstick thin, she still believes she's overweight. She counts every calorie. It's harrowing, poetic and hard to put down when you start reading it. Ultimately uplifting (spoiler alert?). Lia learns that food is life. Brilliant. For young adults, ages 12 and up.

ALONG FOR THE RIDE (Viking, $19.99) is Sarah Dessen's newest novel. For the summer before college, Auden decides to go stay at the beach with her father and his new wife and their baby daughter. The baby's colicky screaming bouts drive Auden out of the house to the boardwalk and beach, where she meets an enigmatic loner named Eli. Also for young adults, ages 12 and up.
Posted by Joanne R. Fritz at 11:13 AM 4 comments:

The American Independent Business Alliance urges you to "unchain yourself" on Saturday, November 21st by shopping at local independent businesses instead of big chains.

Just a plug for my friends over at the First Novels Club blog, one of the best blogs I read.

For the first time (and certainly not the last), they've been mentioned in Publishers Weekly thanks to Frankie's excellent note-taking during a young-adult author event at Books of Wonder in NYC. Sounds awesome. Wish I coulda been there.

How's it going, all you NaNoWriMo and NaNoRevisMo participants?

And even those of you writing new picture books or trying to come up with new ideas or spending November sending out manuscripts (because it's wise to get them to the editors before Thanksgiving)? Well, here's some inspiration for you:

My older son, a 22-yr-old full-time college student -- and oh yeah, he happens to be a cancer patient currently going through chemo -- signed up for NaNoWriMo. He's writing a fantasy novel.

Since the holidays are just around the corner, think about buying this book as a gift for someone special. Here's my latest Gem of the Week:

Richard Peck, the first children’s author to have been awarded a National Humanities Medal, gives us a wonderful gift: a Christmas story to make us smile.

The hilarious Grandma Dowdel returns in this sequel to the award-winning novels, A Year Down Yonder and A Long Way From Chicago. It's 1958 and a new pastor and his family move in next door to the eccentric Mrs. Dowdel.

The first one in the family to get to know her is the pastor’s 12-year-old son, Bob. She saves him from an embarrassing predicament involving some bullies, an outhouse and a reel of fishing line.

In her gruff way, Mrs. Dowdel ends up helping every member of the family. By the time Christmas arrives, they realize they need to find the perfect way to say thanks and give her a gift in return.
Posted by Joanne R. Fritz at 1:53 PM No comments:

No, that's not the title of my 27th attempt at writing a picture book (although, come to think of it, that's a great idea. Hmm.

Sort of a cross between Giraffes Can't Dance and Hilda Must Be Dancing... only with elephants).


And it has nothing to do with a Republican winning the governor's race in New Jersey.


No. It's actually a snippet of a quote from Michael Powell of Powell's Books, as quoted in The Oregonian (and quoted again in Shelf Awareness on Oct 26, 2009).

The full quote: "It's nice to find a high perch when elephants are dancing."

That's by far the most creative way I've heard of describing the book price war between Walmart, Amazon, Target and Sears, and how bookstores should cope. You can read more about that craziness here.

Will this be the nail in the coffin for independent bookstores and chains alike? I don't think so. Those big-box stores are deep-discounting only bestsellers, and only online. Bookstores can offer so much more than that. And I expect this pricing war will be temporary. Bookstores will survive. What do you think?
Posted by Joanne R. Fritz at 8:44 PM 4 comments:

Good luck to all those brave souls participating in NaNoWriMo.

Personally, I plan to use the time to FINISH a children's middle grade novel I started a long time ago and which stalled out after 30 pages. Wish me luck. Not as difficult as writing 50,000 words from scratch, right? Ha. You don't know me.

What about all you writers out there? Participating? Revising an existing novel? (INTERN has a great post about this.) Or just getting your head in gear to even think about writing a novel? It's a daunting task.
Posted by Joanne R. Fritz at 9:25 AM 4 comments: