Part Two of my interview with Dianne Salerni, author of THE EIGHTH DAY -- and a Giveaway! 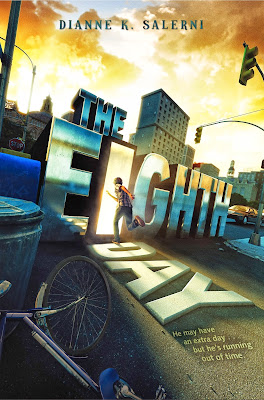 We're back with Part Two of my interview with Dianne Salerni, author of The Eighth Day, coming from HarperCollins in April. 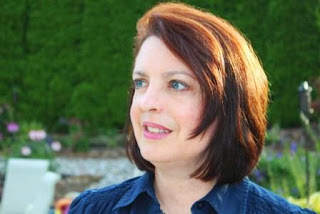 You teach full time, have family obligations, keep up with your blog twice a week, AND you're very generous with advice and beta reading for less experienced writers, like me (thank you!). When do you find time to WRITE?

I write whenever I’m not teaching. Ask my family. They’ll tell you I’m attached to my laptop, that I can be obsessive, and it’s sometimes hard to get my full attention!

I do most of my blog reading and commenting in the mornings over coffee. I will write in the late afternoons, evenings, and weekends. What I’m writing impacts when I do it. I can revise already-written words at any time of day, but new words come most easily late in the evening.

So, if I’m facing the first draft of a new chapter, I will probably work on blog-related stuff or beta-reading in the afternoons and early evening (and promotional things like this interview!) and wait for the Muse to show up around 9 pm!

You are repped by Sara Crowe of the Harvey Klinger Agency. Can you briefly fill us in on how you got your agent?

I signed my first contract un-agented and quickly realized I didn’t know what I was doing. I started looking for an agent shortly before We Hear the Dead was published, but it took months to land with Sara. I had plenty of outright rejections and two full Revise & Resubmits that ended in “passes” during that time. As disheartening as those R & R rejections were, I credit them for helping me produce a manuscript that was worth reading before I queried Sara.

Your first two novels, We Hear the Dead and The Caged Graves, were YA. How different did it feel to write MG?

The manuscript I called “Grunsday” started out as YA too! It was my agent Sara who recommended that I revise it for MG, and as soon as she did, I saw the potential in that change. Writing the MG voice was a lot of fun for me. Maybe that’s because I’m around kids all day.

The one thing I miss from YA is romance. But Jax has a couple of YA friends with an understated romance going on, so I get to play around with it a little. Jax knows the romance is brewing, and he’s rooting for them, but he doesn’t want to know the details!  Eww.

Ha! That's great. The Eighth Day will be a series. Can you give us any hints about Book 2?

Well, Jax Aubrey is an orphan, living with 18 year old Riley Pendare, who was named as his guardian by Jax’s dad before he died. But there are a lot of things Rayne Aubrey lied about – and a very specific reason he chose Riley as Jax’s protector.

Turns out, Jax has relatives, and they want him back. And when Jax finds out who they are, his world is turned upside-down and backwards.

Oh, cool! What a great hint. Now I can’t wait for book two! Thanks so much, Dianne.

And now, readers, I have a two-part giveaway.

First, I'm giving away my ARC of The Eighth Day to one lucky winner I will choose at random.

Second, I will give away a pre-ordered, SIGNED hardcover copy of THE EIGHTH DAY to another lucky winner, also chosen at random. I will get it signed at Dianne's book launch in April.

All you need to do to enter this giveaway is be a follower and comment on this post. If you tweet about it or mention on facebook, let me know and I'll give you extra chances. I would give you an extra day, but that only happens in this book! International entries welcome. This giveaway ends at 10pm EST on Sunday March 9 and the winners will be announced on Monday March 10.

Part One of my interview with Dianne Salerni, author of THE EIGHTH DAY

Source: ARC courtesy of the author

Synopsis (from Dianne's website): In this riveting fantasy adventure, thirteen-year-old Jax Aubrey discovers a secret eighth day with roots tracing back to Arthurian legend. Fans of Percy Jackson will devour this first book in a new series that combines exciting magic and pulse-pounding suspense.

When Jax wakes up to a world without any people in it, he assumes it's the zombie apocalypse. But when he runs into his eighteen-year-old guardian, Riley Pendare, he learns that he's really in the eighth day—an extra day sandwiched between Wednesday and Thursday. Some people—like Jax and Riley—are Transitioners, able to live in all eight days, while others, including Evangeline, the elusive teenage girl who's been hiding in the house next door, exist only on this special day.
Why I loved it: Are you kidding? It's got everything! The most exciting premise ever. Action, adventure, fantasy, Arthurian legends, and both boy-appeal and girl-appeal. Plus it's fast-paced and grabs you right from the start. Bonus: it will be a series.

And now for Part One of my interview with Dianne Salerni, Pennsylvania resident and the author of The Eighth Day:

Welcome to the blog, Dianne!  Even before I read The Eighth Day, I loved the premise. Can you tell us how you came up with the idea of an extra day between Wednesday and Thursday?

Thanks for having me here, Joanne! The idea came out of a family joke. My daughters would ask when they would get to do something, and my husband would respond, “Grunsday. We’ll do that on Grunsday.” One day, I said, “What if there really was a Grunsday in the middle of the week, but not everybody knew about it?”

The premise of a secret day hung around for a long time without a plot to go with it, although my family never let me forget the idea. It took maybe 18 months from the original inspiration to get a sense of what the story would be about. Even then, I pantstered the whole first draft. It ended up as a 98,000 word monstrosity that needed major taming and focusing and word slashing in the second draft.

Wow! That’s a lot of words. Good for you for taming that monster. Jax is a great character, so real and so likable. And I love his name, which is short for Jaxon. Do you choose names for their meanings or because they seem to fit the character?

I don’t choose the names, really. The characters choose them. They tell me what they want to be called. Jax, for instance, told me his name even before I had the plot nailed down.

I told him he couldn't have the name Jax. What kind of name was that for a boy? I wanted to set this story in contemporary America, and who names their kid Jax? I threw different names at him; he rejected them all. In the end, I did a little internet searching and discovered Jaxon as an alternative spelling for Jackson. So I let him have his name.

Since then, I’ve come across the name Jax, for a boy, twice on the internet. (So I guess people really do name their kid that! I grew to like it more and more as I used it.)

I love the way you incorporated Arthurian legends. Tell us a little about your research and how extensive it was. Did you do most of it on the internet or in the library?

First of all, I never intended to incorporate Arthurian legends into this story. That developed in the rambly first draft when I stumbled across stories about Merlin being imprisoned by his apprentice Niviane in “an eternal forest.” The description of where Merlin was trapped had some eerie similarities to the way I was describing Grunsday, or “the eighth day” in my draft.  Once the idea took hold, it wouldn’t let go.

I did most of my research over the internet. However when my family started planning a vacation in the U.K. this past summer, my husband hired a private tour guide to spend one day taking us to Arthur-related sites around Cardiff, Wales. (Our original reason for visiting Cardiff was to see the Doctor Who Museum. An Arthur-related tour was a happy bonus!)

Tune in next Monday for Part Two and the Giveaway!