Congratulations, Suzanne! Look for a message from me asking for your mailing address.

Today's MMGM features another debut novel. And it's the debut of our own Jessica Lawson!

For other MMGM posts, look for the links on Shannon Messenger's blog.

The Actual &Truthful Adventures of Becky Thatcher by Jessica Lawson, illustrated by Iacopo Bruno  (for ages  8 to 12, Simon & Schuster, July 2014)

Synopsis (from the book jacket): Becky Thatcher is sick and tired of that tattletale Tom Sawyer following her around! Becky is determined to have her own adventures, just like she promised her brother, Jon, before he died. When she joins the boys at school in a bet to steal from the Widow Douglas, the rumored town witch, Becky recruits her best friend Amy Lawrence to join her in a night of mischief. And that's when the real adventure begins.

Why I recommend it: What a fun read! This is one of those delightful stories you could easily read over and over again, especially if you're eleven or twelve. You don't have to be familiar with Tom Sawyer or Sam Clemens, but it helps. This is a smart, funny book, and best of all, it features one of the strongest female protagonists I've encountered this year. Or in a lot of years. The sassy and tomboyish Becky is a joy to get to know. You'll have a great time tagging along as she searches for adventure, escaped convicts, and maybe even treasure.

What MG novel could you read over and over again? Tell me in the comments.

Now for the GIVEAWAY details:


My very own hardcover copy (*hugs book*) is staying right here in my house, but the author herself has generously offered a FREE hardcover copy for one lucky winner, who will be chosen by randomizer. This giveaway is open to US/Canadian addresses only. To enter, you must be a follower and you must leave a comment on this post. If you tweet about the giveaway or mention on facebook or your own blog, I'll give you extra entries, but please include the links. Thanks! This giveaway ends at 10 pm EDT on Friday Oct 3, 2014 and the winner will be announced on Monday Oct 6. 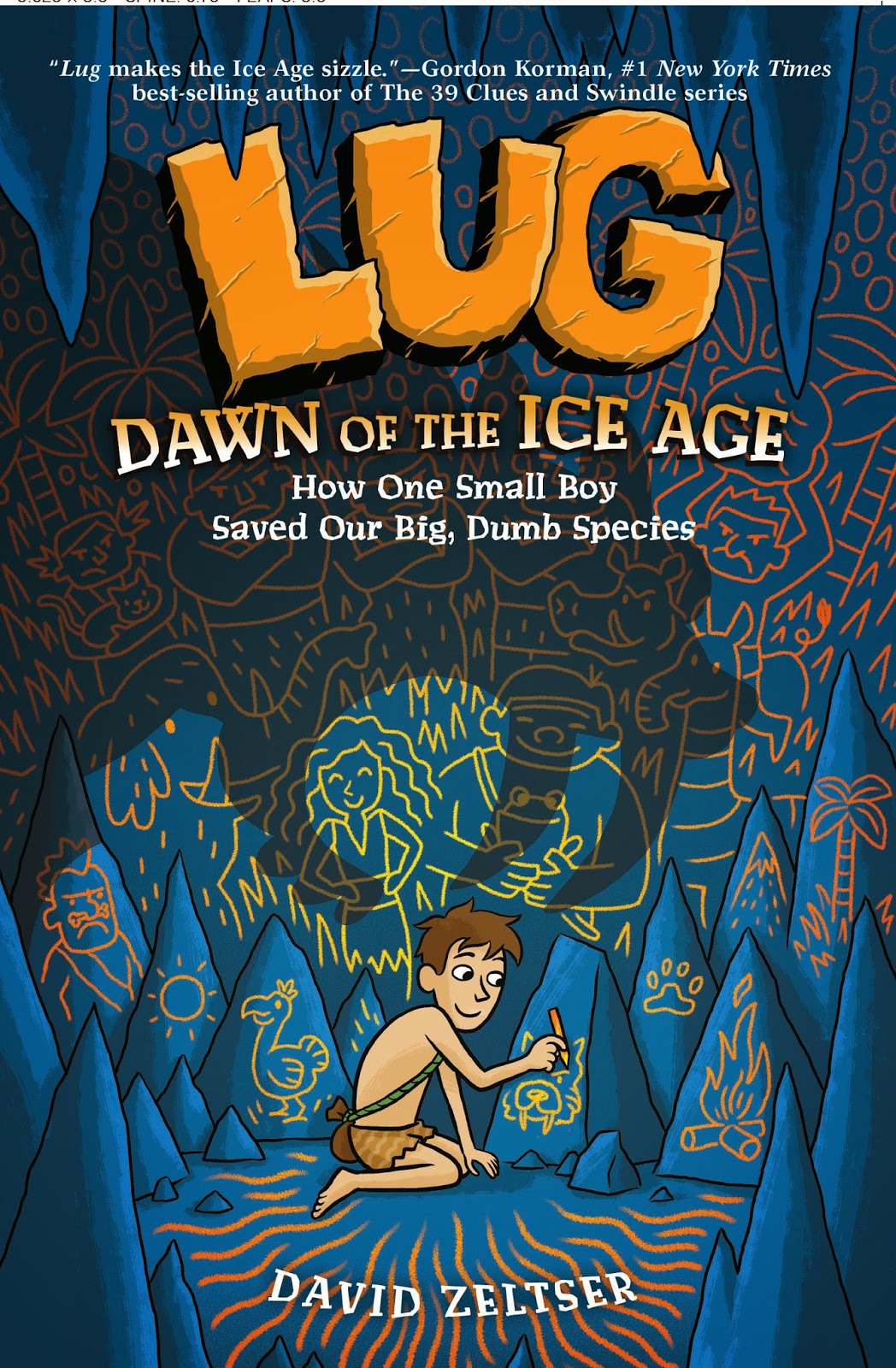 Source: Netgalley, by invitation from the publisher

Synopsis (from the publisher): In Lug’s Stone Age clan, a caveboy becomes a caveman by catching a jungle llama and riding against the rival Boar Rider clan in the Big Game. The thing is, Lug has a forbidden, secret art cave and would rather paint than smash skulls.

When Lug is banished from the clan for failing to catch a jungle llama, he’s forced to team up with Stony, a silent Neanderthal with a very expressive unibrow, and Echo, a girl from a rival clan who can talk to animals and just may be prehistory’s first vegetarian and animal rights activist. Together they face even bigger challenges—Lug discovers the Ice Age is coming and he has to bring the warring clans together to save them not only from the freeze but also from a particularly unpleasant migrating pride of saber-toothed tigers. It’s no help that the elders are cavemen who can’t seem to get the concept of climate change through their thick skulls.

Why I recommend it: Lug is my new hero. He's endearing, funny, and smart. David Zeltser has managed the magical feat of channeling the voice of a twelve-year-old cave boy to perfection. Lug is the only one in his clan who seems to realize climate change is coming, although in this case, it's an ice age. But you'll also enjoy Lug's creative tendencies, his attempts to bring rival clans together, and of course his first crush. An easy and fast read. Final art not seen, but it looks as if the lively drawings will enhance the story nicely.

David Zeltser emigrated from the Soviet Union as a child, graduated from Harvard, and has worked with all kinds of wild animals, including rhinos, owls, sharks, and ad executives. David lives with his wife and daughter in Santa Cruz, California. He performs improv comedy and loves meeting readers of all ages. His second book about Lug is scheduled to publish in Fall 2015. Visit David’s website at www.davidzeltser.com. He’s also on Twitter: @davidzeltser

And now, a touching guest post from David, with giveaway details below that.


Dear My Brain on Books readers,

Joanne kindly asked me to share something about my journey as a writer.

Although I was a constant reader, up until I was 21, I was sure I’d be a theoretical physicist. But right before my senior year at Harvard, my best friend was struck and killed by lightning. His name was Qijia Fu and that sudden loss changed everything for me. Instead of continuing on with my plans to go to grad school and do theoretical physics, I suddenly felt I wanted my work to have more of a connection to people, emotion and imagination. I spent my last year of college taking classes in everything except science. There was a regular playwriting contest at Harvard where the winning piece was produced. I co-wrote a play with my brilliant friend, Alexis Gallagher. Encouraged by the win, I began writing screenplays. I wrote with Alexis, with my wonderful actor friend Max Faugno, and on my own. A couple of scripts got optioned, but for some reason it never occurred to me to move to LA. Instead, I wrote whatever I wanted and paid for my tiny NYC apartment by working as a freelance advertising copywriter on the side. My friend Zimran Ahmed always called me Madman, long before the famous show came out.

For more about me, LUG, and other upcoming books, please visit my website. And here’s the page with the LUG book trailer: http://davidzeltser.com/books/lug-dawn-of-the-ice-age

Hope you enjoy it!
David

Thank you, David. I'm so sorry to learn this about your friend, but glad you found a beautiful way to connect with people.

Readers, the publisher has generously offered a signed, hardcover copy to one lucky winner. Open to addresses in the US or Canada only. You must be at least 12 years old to enter this giveaway. To enter, all you need to do is be a follower and comment on this post. I will give extra entries if you mention this on Twitter, Facebook, or your own blog, but please include a link. Thanks! This giveaway ends at 10 pm Eastern Time on Friday, September 19, 2014. Winner to be announced Monday, Sept 22.

Be sure to visit these other stops on the LUG Blog Tour:

Monday, September 08, 2014
The Haunting of Orchid Forsythia
Review and giveaway