Monday, June 22 (Day 105):
Woke up with an aching jaw. Hasn't happened for a couple of weeks. Luckily, it went away after Tylenol and breakfast.
Today is our anniversary! We've been married 35 years.
Definitely the most unusual anniversary we've ever celebrated. In pre-pandemic times, we always went away for our anniversary, usually for three or four days. This year, of course, we're staying home. We "vacation" on our deck. And yes, I fully realize how fortunate we are to have this private little oasis. 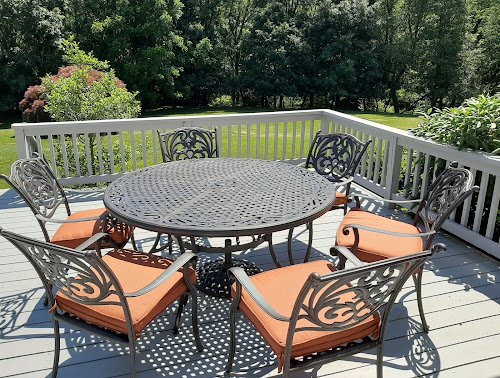 Our best friends texted us in the morning and offered to bring take-out over for lunch. Of course, we said yes! It was a lot of fun. It was also a hot day, 93 F on our deck by 12:30, so we ended up eating inside. We set up our six-foot long rectangular kitchen table with two seats on each short end and the four of us talked and ate and laughed for about an hour.
This was on my news feed today from the Washington Post. In case you can't access it, here are the first three paragraphs:
State and city leaders in the U.S. are responding to a surge in coronavirus cases and hospitalizations by implementing new rules, scaling back on reopening plans and issuing dire warnings about the future of public health and the economy.

In lieu of a Florida statewide mask rule, several city mayors in Miami-Dade County are implementing their own mask requirements. Texas authorities temporarily suspended the alcohol permits of 12 bars for violating protocols designed to stem the crisis, as Gov. Greg Abbott (R) said cases and hospitalizations there are increasing at an “unacceptable” rate. And in Utah, the state epidemiologist is warning that the state could be facing a “complete shutdown” if cases continue to rise.

Twenty-nine states and U.S. territories showed an increase in their seven-day average of new reported cases on Monday, with nine states reporting record average highs. In the states where cases are spiking the most, hospitalizations are also rising sharply. More than 2,290,000 cases and 118,000 deaths have been officially reported in the United States.

Today, I returned the manuscript to my editor, with the last few small changes she asked me to make a little over a week ago. She wrote back a few hours later to say, "I think we have a final manuscript. Congratulations!"
This is THRILLING.
If you're not a writer, you may not realize just how exciting this is. But if you're a writer, published or unpublished, you'll know how cool this is. Now they'll start to work on the cover, the design of the book, and even marketing! I have to turn in my acknowledgments and the dedication, and I have to fill out an extensive packet for the marketing department. This will keep me busy for at least a week!

__________________________
Also today, the Washington Post published some graphs showing the recent rise in virus cases in the US.   Why did so many states reopen before they'd reached their peak? This map is particularly frightening (if you go to the link, it's interactive, but even without that you can see how much the surge is affecting the South:
Wednesday, June 24 (Day 107):
Today, I had to go to the eye doctor. This may not seem important, but I have hereditary glaucoma, diagnosed last October, and I'm supposed to get the pressure in my eyes checked every six months. The appointment was originally scheduled for April and got postponed until today because of the pandemic.
I was a bit nervous, and my husband (my driver) had to wait in the car as I went in with my mask on. They've installed plexiglass shields around the check-in desk and every staff member wore a mask (thank goodness!). One thing I discovered: it's actually hard to hear people when they're wearing a mask, especially if they're soft-spoken. I kept apologizing to the kind woman who checked me in because I couldn't hear the questions she was asking me. They want to know how you feel, if you've been exposed to anyone with COVID-19, and if you've been out of the country in the last three weeks. I feel fine and the other answers were no, so I was asked to wait in the large waiting room. They've removed most of the chairs and spaced the others at least six feet apart.
How odd, though, that the table next to me still held magazines! As if I'm going to touch a magazine someone else could have touched! This virus is really changing the way people think and act.
The good news is my glaucoma is under control and the doctor said my cataract can wait a year to be removed. It's not that bad yet.
The joys of growing old...
This article was in today's New York Times. Finally! Justice for Ahmaud Arbery, killed while jogging in Georgia on February 23rd.
Leftovers for dinner.
Started watching "Self  Made: Inspired by the Life of Madam C.J. Walker" on Netflix. It's compelling to watch, with excellent acting and superb writing . I've been a fan of Octavia Spencer since "The Help" in 2011 and "Hidden Figures" in 2016. She's fantastic in "Self Made"! Wish there were more than four episodes.
Friday, June 26 (Day 109):
Remember Keisha N. Blain? I started following her on Twitter a couple of weeks ago. Looking through her Twitter feed, I found an article she wrote in Ms Magazine about books written by women, to understand the uprisings. She includes brief reviews of each book.
I'm almost finished All American Boys by Jason Reynolds and Brendan Kiely. Have you read it? I'm impressed by the way these two authors take you deep into each of the main characters' lives to the point where they seem like real high school kids. Published in 2015, the book also brings the issue of police brutality to the forefront. Read this, especially is you liked The Hate U Give by Angie Thomas. 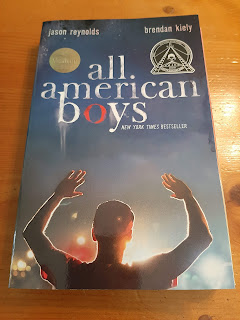