First, I want to say welcome to the new followers. I don't post often, but I hope what I post is entertaining in some way.

For various reasons, I never got around to wishing everyone a Happy Hanukkah, Happy Solstice, Merry Christmas, Happy Kwanzaa, and whatever other holiday people celebrate in December. 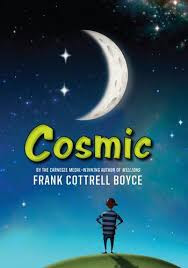 Anyone who read and loved Millions as much as I did will also enjoy Frank Cottrell Boyce's new novel. But it's a very different storyline. Here, twelve-year-old Liam Digby manages to get himself onto a rocket ship. How? By pretending he's his own father. And how, you ask, could he possibly fool the scientists into thinking he's 30-something? Simple. Liam is incredibly tall and mature for his age. He's already shaving.

Ok, so if you can accept that premise, you'll have a lot of laughs with this very entertaining novel, in which the narrator convinces us that playing video games really does prepare you for life. Like Charlie and the Chocolate Factory, by Roald Dahl, Cosmic centers around a contest. The lucky winners will get a chance to go to China and ride the best thrill ride ever invented. Liam talks his friend Florida into going as his "daughter" because the contest is open to kids and their fathers. When they get there, they find out the rocket is a real rocket, not just a thrill ride. And only one dad can go up with all the kids. So in a sort-of contest within the contest, Liam (who, remember, is only 12) has to compete with the other dads to be the best dad, the one dad who gets to go into space. Luckily, Liam is a very observant kid and knows all about dadliness. 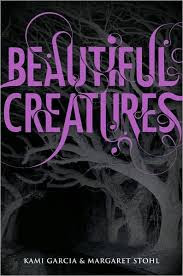 In sharp contrast is Beautiful Creatures by Kami Garcia and Margaret Stohl (Little, Brown, official pub date is January 2010, but it's already on the shelves), ages 12 and up.

Dark, brooding and lushly atmospheric, Beautiful Creatures is a young adult paranormal romance mixed with Southern Gothic. And unlike so many young adult paranormals, it's told from a guy's point of view. Ethan Wate comes from a long line of southerners. He's spent his entire life in Gatlin, South Carolina, and can't wait to graduate and get the heck out. Then Lena Duchannes comes to town...

"She was powerful and she was beautiful. Every day was terrifying, and every day was perfect."

Lena, the niece of the town recluse, has certain powers. Things happen when she's around. And Ethan is inexorably drawn to her.

I'm sure Little, Brown is hoping this will be the next Twilight (same publisher). It could well turn out to be.
Posted by Joanne R. Fritz at 4:23 PM 2 comments:

Now that winter's here (hey, we had 16 inches of snow yesterday and it's not officially winter until tomorrow), keep in mind this young adult title that's coming out in about six weeks:

A sweet and beautifully-written story about a 14-year-old girl named Melissa, who loses her father to cancer. Before he dies, he tells her that the piece of glass she found in the dry riverbed behind their house would last for a million years. She keeps it because it's the last thing he ever touched. She also keeps his journals and tries to lose herself in them. As the months go by, her mother and older sister seem to be getting on with their lives (Mom starts dating, Ashley tries out for a beauty pageant and also goes out with a popular football player). But Melissa is stuck. Her grades are slipping. She doesn't care what she looks like. She knows she'll never be beautiful like Ashley. The only person Melissa can talk to is her neighbor and best friend, Ryan. But even Ryan begins to distance himself from her as he falls for the new girl in school.

This is so much more than a contemporary high school story. It's a quiet little gem of a novel about love and family and friendship and beauty -- the inside kind and the outside kind.

And Now For Something Completely Different

As I steal from Monty Python...

Thanks for all the comments on my last post. And I'll keep that book in mind, Kim. So, what DID I end up reading as Book Number 100 this year? 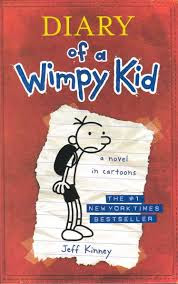 Yep. Diary of a Wimpy Kid by Jeff Kinney (Abrams). Find it at your local indie bookstore through Indiebound.org. I've been selling this book for years without ever knowing what the fuss was about. Kids love this mix of middle-school humor and cartoons. Now I understand why they're so popular. Jeff Kinney obviously remembers his own school years. The voice is spot on.


And since the first book was so hilarious, I skipped right to his newest: 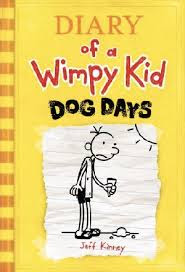 Diary of a Wimpy Kid 4: Dog Days (Abrams, 13.95). It's equally as funny. Maybe even more so. This one delves into Greg's summer vacation (and with the snow and ice we've had here in Pennsylvania already this winter, I didn't mind reading about hot summer days and swimming in the pool).


So I've already passed my record from 2008 of 101 books (and just in case you're thinking, oh they're children's books, of course she can read so many, I have to tell you that this year I also read Pillars of the Earth, among other grown-up titles).


What are you reading?

And I'm not ready! Wanted to do a blog post of book recommendations for the holidays. Of course, I've already mentioned a few here and here. But for a much more thorough list, go check out Janine and Sara's wonderful post over at the FNC, and note that they also recommend Magician's Elephant, as I did way back in August, so we must be on to something there. If you haven't read it yet, what are you waiting for?


The great news is that my son, Eric, is an official winner of NaNoWriMo, with 50,171 words. First time he even participated. Way to go, Eric! Halfway through chemo and he has a novel under his belt.

I, alas, didn't even begin to finish the novel I was supposed to be trying to finish during November (unofficially, of course). However, I did write three new picture books, including Elephants Are Dancing (thanks, Kim, for the nudge) . I'll see what my writing group thinks of my rhyming elephant story this weekend.

Well, for those of you who don't think writing picture books is much of an achievement, here's another accomplishment. Every year, I try to read at least 100 novels, along with working and writing and doing household chores and all that boring stuff. I keep a notebook with titles, authors, and dates I finished reading the books. As of today, I finished Number 99. In the past few weeks, in addition to Solace of the Road, I've read: 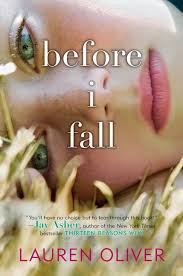 reading it. Guaranteed. "Groundhog Day" meets "Mean Girls" with a dash of 13 Reasons Why. Samantha has to relive the last day of her life over and over until she gets it right. Oddly, this isn't a story about dying. It's a story about living. And Sam's character development is amazing as she relives that Valentine's Day and grows and matures and realizes, finally, what's important.


Along For the Ride by Sarah Dessen, ages 12 and up. Just a really sweet story from a wonderful writer.

Woods Runner by Gary Paulsen (due Feb 2010, ages 12 and up). The Revolutionary War as you've never seen it before. Nice and short and should appeal to reluctant readers. But there's a lot of pretty horrifying violence, which is, of course, Paulsen's point. War is never justified. 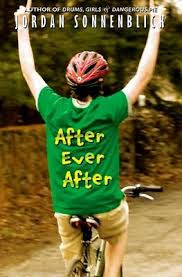 ny and heartbreaking, this is a great read, largely due to Sonnenblick's pitch-perfect teen guy voice. Jeffrey, the little kid with cancer in Drums, Girls, and Dangerous Pie, is back and all grown up. Or at least he's now in 8th grade. Aftereffects of chemo have made school a struggle for him. If it weren't for new girl Lindsey and best friend Tad, another cancer survivor, Jeffrey would be lost. His older brother Steven, the rock he's always depended on, has run off to Africa to study drums. 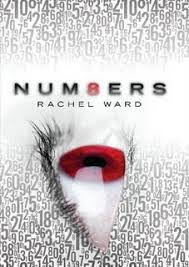 A stunningly original story. Jem sees numbers when she looks in people's eyes. The numbers are the date of their death. When she and her friend Spider ditch school for a day in London, they plan to ride the London Eye -- until Jem looks into the faces of the others in line and realizes they all have the same numbers. And their numbers are up today. Seen running away just before an explosion, and wanted for questioning by the police, Jem and Spider go into hiding. Two city kids holing up in the countryside, they don't have a clue what to do. And Spider's numbers are ticking closer...

So, what should I read next? I'm considering Jellicoe Road by Melina Marchetta, The Demon's Lexicon by Sarah Rees or Liar by Justine Larbalestier. I want Number 100 to be something special.
Posted by Joanne R. Fritz at 10:03 PM 6 comments: