As "Cloudy With a Chance of Meatballs" rakes in money at the box office and "Where The Wild Things Are" is due to open Oct 16th, I just had to draw your attention to this hilarious article from EW.com, "Classic children's books we'd like to see receive the Hollywood treatment."

If you read the comments after the article, you'll notice that most of the commenters didn't realize author Keith Staskiewicz had his tongue firmly planted in his cheek. (My favorite line is from Staskiewicz's version of The Giving Tree: "All you ever do is take, take, take!")

In short, full-length movies are being made from picture books of less than 500 words. What does this mean? They pad out the story by adding a contrived plot and characters who aren't even in the original.

Okay, I probably won't be on here much for the next couple of weeks (so all 4 of you who are reading this, take note) because I'm now up to my eyeballs in critiques. First for my own writing group (which always takes priority) and then for an SCBWI conference in early October.

But I wanted to post some early Newbery and Caldecott predictions. Because even though I never ever manage to predict the gold medal winners, I have on more than one occasion actually picked some books that ended up with silver medals (honors). For those who don't know, the Caldecott Award is named for the 19th-century illustrator Randolph J. Caldecott and is awarded every year in January by the ALA (American Library Association) to the artist who has illustrated the most distinguished American picture book of the previous year. Last year's winner was The House in the Night by Susan Marie Swanson, illustrated by Beth Krommes (Houghton Mifflin).

The Newbery (and please note the spelling: it's not Newberry) is named for an 18th-century bookseller (woo hoo!) named John Newbery, and awarded by the ALA for the most distinguished contribution to American children's literature from the previous year. Last year's winner was The Graveyard Book by Neil Gaiman (HarperCollins). These are the big two awards among librarians and booksellers. There are a host of other awards including the Bel Pre award and the Sibert Medal, etc. The Printz award (for young adult books) has been gaining ground in more recent years, and the Theodore Seuss Geisel Award for Beginning Readers is starting to pick up speed. But the two awards that make book collectors salivate are the Caldecott and the Newbery.

) just out this month from Little, Brown.

The Magician's Elephant by Kate DiCamillo, with illustrations by Yoko Tanaka (Candlewick, Sept 2009). Mentioned in my earlier post.

Beautiful and sad. And it won't win because she's a new author. But one can always hope. 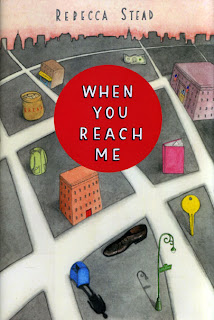 I'm back from a much-needed vacation and trying to catch up.

For all of us, ahem, older aspiring writers, here is a quote from the bookseller newsletter Shelf Awareness from Wednesday, September 2, 2009:

Dick King-Smith (author of Babe, the Gallant Pig, among many other books) "was first published at age 56."


Have you ever been lucky enough to pick up a book that you just couldn't stop reading? I'm talking about a book that draws you in so completely that your surroundings fade away and you're deep in the world the author has created. And your family has to tear the book out of your hands so you can eat dinner. (Huh? Whaaa? Dinner?) Or you're reading late into the night and before you blink, it's three a.m.


Those kinds of books.

Life as We Knew It by Susan Beth Pfeffer (pubbed in 2006 by Harcourt, but I didn't discover it until the paperback came out in 2008)
When a meteor pushes the moon out of its orbit, life for everyone on earth changes. Tsunamis and earthquakes wipe out millions of people. Summer becomes as cold as winter. Miranda decides to keep a diary detailing how she and her family struggle to survive. So convincing it will make you want to run out and stock up on peanut butter and batteries.

Jenna awakens from a year-long coma after an accident, with no idea who she is. Gradually, memories begin to come back to her but they're impossible. She can remember her baptism. She can quote entire novels. Who IS she really? What did her parents do while she was in that coma? Chilling futuristic stuff.

The Forest of Hands and Teeth by Carrie Ryan (Random House, March 2009)

Honestly, I would never ever pick up a book about zombies. But this amazing cover pulled me in. And even then I only intended to read the first chapter or so (just to see what it was about) one morning when I had a day off work. Before I knew it, I was so deep in Mary's world that it was dinnertime and my husband was getting antsy. Best thing about it: she never uses the word zombie. They're the Unconsecrated. How cool is that?


The Chosen One by Carol Lynch Williams (St Martin's Griffin, May 2009)

Kyra is 13 and lives in a polygamous community in the desert. She has 20 brothers and sisters, three mothers and one father. And there's genuine love among them all. But Kyra has some guilty secrets. She sneaks out to a bookmobile and borrows books instead of reading only the Bible. She wants to kiss Joshua Johnson. Worst of all, she fantasizes about killing the leader of the cult (one of the best opening lines in any young adult novel). When she's told she has to marry her cruel 60-year-old uncle, she agonizes over whether or not to run away. Horrifying and amazing at the same time.


And here's one for Middle Grade readers:

Conn is a pickpocket and a gutter boy in Wellmet, a city that runs on magic. When he picks the wrong pocket, trying to steal a magician's locus magicalicus (a stone that helps magicians work spells), he winds up working for the magician. But Conn isn't content to be an errand boy. He wants to be an apprentice and learn magic. I read in one breath the scene where Conn is searching for his own locus stone.


What books have you found compelling enough to keep you reading late into the night?
Posted by Joanne R. Fritz at 9:37 PM 2 comments:

Ok... so up there in my header it mentions "the brain stuff." If you wondered what that meant, I'm here to explain. And please bear with me, because this WILL tie in to books eventually. After all, books are my life. In honor of September (National Brain Aneurysm Awareness Month... if Congress ever gets around to declaring it. House Resolution 263 still needs more co-sponsors before they can pass the legislation), I present to you the basics of brain aneurysm awareness:

1) A brain aneurysm is NOT a brain tumor. They are two completely different illnesses.

2) A brain aneurysm is a bubble or bulge in a weakened wall of an artery in the brain. In my case it developed on the tip of the basilar artery.

3) According to the Brain Aneurysm Foundation, 1 in 50 people have an unruptured brain aneurysm.

4) Approximately 25,000 people per year will suffer a cerebral aneurysmal rupture.


So the odds of me fully recovering worked out to something like 1 in 9. I'm one of the lucky ones. I was able to go back to work (on a limited basis) three months after my rupture. But it took me a full year and a half to feel like myself again.

Yes, I am a brain aneurysm survivor. And, yes, I work in a bookstore. Would you believe in seven years of working in the Children's Department, the only book I've come across that treats brain aneurysms with respect is Tangerine by Edward Bloor? (Thank you, Mr. Bloor.)

Then there are books that turn aneurysms into a joke. On page 357 of Twilight by Stephenie Meyer, Bella says: "It appeared that Charlie was having an aneurysm." She does something similar in New Moon, when Bella tells Jacob, "Don't have a brain hemorrhage, Jacob." As someone who actually had a brain hemorrhage, I can tell you there is nothing funny about it.

Now if someone would just write a book in which the brain aneurysm sufferer actually lives...
Posted by Joanne R. Fritz at 8:45 PM 2 comments: