How can ANY book possibly live up to all that hype? You know what I mean, right? Those ultra-hot new YA books that popular authors blurb themselves into a frenzy over. Which makes all of us poor readers drool and slobber all over ourselves and say Must. Read. That. Book.


CLOCKWORK ANGEL by Cassandra Clare (a prequel to The Mortal Instruments series), coming August 31st from Margaret K. McElderry Books/Simon and Schuster, for ages 14 and up.

Set in Victorian London, this is the story of Tessa, an American who comes to London to find her brother and quickly discovers she has a special power. Not for the squeamish. This one has lots of blood and gore and excitement.

Plain Kate, by Erin Bow, pubbing September 1st from Arthur A. Levine/Scholastic, for ages 12 and up. After being orphaned and cast out of her community (she's suspected of causing the sickness that blankets the countryside), Plain Kate joins the Roamers, because she has nowhere else to go. I could totally see this as a movie, with Johnny Depp as the albino magician, Linay. He could wear the same make-up he wore in "Alice in Wonderland."

CHED by Ally Condie, coming November 30th from Dutton, for ages 12 and up. Set in a futuristic world in which everything is perfect, every decision is made by the Community, including whom one will marry. Cassia has always looked forward to her Matching. But when she's matched up with a friend she's known forever, and then a glitch occurs and another face appears briefly on the screen, she begins to wonder what her future holds.


YOU by Charles Benoit, pubbing August 24th from HarperTeen, for ages 12 and up.

There is no way to describe this without giving too much away. Except that it's written in the 2nd person. As you read this modern high school slacker tale, you become Kyle Chase. Yes, you are that involved in his life. Heartbreaking and sure to be talked about for years to come.

Do they live up to all those expectations? Hell yes. I'm happy to report that they're all excellent reads.

I'm going out on a limb here and posting a minor complaint (which I never ever do), but I think the writing itself could have been stronger in two of them.

Hmm. Let's just say the dreaded phrase "too many adverbs" crossed my mind in one case. And "derivative" in another. Despite that, I HAD to turn pages as fast as I could to find out what happens. Now that's good writing, despite the lack of editing. Apparently if you have a great hook, likable characters and an edge-of-your-seat plot, you can get away with a little bad writing.

Which is an eye-opening revelation as I struggle to finish the crappy rough draft of my first novel.

Which book is my favorite? They're all so different I don't have a favorite. PLAIN KATE is definitely the most literary (read: most likely to still be around in 100 years). But YOU was the one I simply could not put down. The one that made me sit back and say, "Wow." Stunned is too pale a word for how I felt about this book. I was blown away.

A customer asked me to point out our Dr. Seuss section in the bookstore. I started walking her there, and she mentioned that she needs GO, DOG. GO! I made an abrupt left turn and steered her to Beginner Books. I pulled out GO, DOG. GO! and gently pointed out that it's actually written by P.D. Eastman.


And THAT'S why we still need booksellers.

(I have nothing against the good doctor, you understand. I even own two well-thumbed autographed copies of his books, but HE'S NOT THE ONLY WRITER OF CHILDREN'S BOOKS!)

What about you? It's okay to admit it. Is there a kids' book you've always mistakenly thought was written by Dr. Seuss -- and it turned out to be written by someone else?

If not, what's your favorite Dr. Seuss book? I think mine is Bartholomew and the Oobleck. Which, believe it or not, was a Caldecott Honor book in 1950.
Posted by Joanne R. Fritz at 9:45 PM 2 comments:

Welcome to the new followers since January. Glad you're here. So why is a children's bookseller suddenly talking about brains? If you missed them, here is another brain-related post and, oh yeah, another.

I'm a survivor of a ruptured brain aneurysm, which happened while I was on vacation in Maine in July 2005.

So it's been five years.

Tomorrow (Monday July 12) I'm having my five-year follow-up MRI/MRA. Am I nervous? Heck, yes. But I know it will be over in an hour and I'll go back to living my life, which means reading children's books and trying to write them. For now, though, I'm a brain aneurysm patient. Which brings me to...

What exactly is an MRI? The letters stand for Magnetic Resonance Imaging.

According to Wikipedia: "MRI provides much greater contrast between the different soft tissues of the body than computed tomography (CT) does, making it especially useful in neurological (brain) ... imaging. Unlike CT, MRI uses no ionizing radiation. Rather, it uses a powerful magnetic field to align the nuclear magnetization of (usually) hydrogen atoms in water in the body. Radio frequency (RF) fields are used to systematically alter the alignment of this magnetization." (You can read more about this here.)

Basically, an MRI takes pictures of your brain, to look for (in my case) any new aneurysms that may have cropped up. And to check on the old one, which has been filled with platinum coils to prevent it from re-rupturing.


So, since I'm lucky enough to be having both procedures, what the heck is an MRA?

MRA stands for Magnetic Resonance Angiography. It's essentially the same as an MRI with the addition of contrast material or dye. In other words, they'll stick my arm with a needle halfway through the procedure and administer gladiolinum. According to the Brain Aneurysm Foundation, this "creates a more enhanced image."

Then we'll find out if I actually have a brain. Or not.

Yes, I feel a bit like the Scarecrow in the Wizard of Oz. Okay, okay, I admit it. I'm reaching here, but I always find a children's book related to my topic.

So, fellow bookbrains, think of me as I go into the tunnel tomorrow morning!
Posted by Joanne R. Fritz at 12:24 PM No comments:

Ah, summer's in full swing here in the Eastern US. It's hot. It's humid. And the oil's still spilling into the Gulf...

In the meantime, the bookstore is crawling with teens buying their required summer reading. While they struggle through The Grapes of Wrath and A People's History of the United States, I left school behind ages ago (ahem) so I'm free to read what appeals to me. I'm getting ready to dive into the ARC of Scumble by Ingrid Law (the companion to Savvy), and Plain Kate by Erin Bow.

So, fellow Bookbrains, what about you? Do your summer reading choices tend to be lighter fare?

And how many books have you read so far? 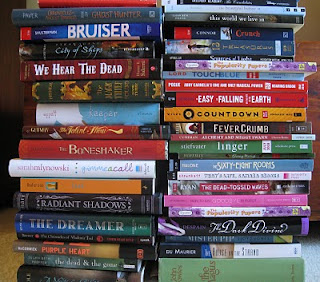 And yes, I keep a list (please note that not every book is aimed at kids, and some of the books I've read do not appear in the photo -- for the simple reason that I've lent them out) :

1. The Magus by John Fowles (3rd reading)
2. Linger (ARC) by Maggie Stiefvater
3. Finally by Wendy Mass
4. 13 Treasures by Michelle Harrison
5. House on the Strand by Daphne DuMaurier (3rd or 4th reading)
6. Incarceron by Catherine Fisher
7. The Clearing by Heather Davis
8. Alchemy and Meggy Swann by Karen Cushman
9. The Dark Divine by Bree Despain
10. The Dead and the Gone by Susan Beth Pfeffer
11. This World We Live In by Susan Beth Pfeffer
12. How to Say Goodbye in Robot by Natalie Standiford
13. The Dead-Tossed Waves by Carrie Ryan
14. That's Life, Samara Brooks by Daniel Ehrenraft
15. The 68 Rooms by Marianne Malone
16. A Nest for Celeste by Henry Cole
17. Purple Heart by Patricia McCormick
18. Green Witch by Alice Hoffman
19. The Dreamer by Pam Munoz Ryan
20. Crunch by Leslie Connor
21. Fever Crumb by Philip Reeve
22. Sources of Light by Margaret McMullan
23. Thirteen Days to Midnight by Patrick Carman
24. Mr. Pip by Lloyd Jones
25. Thief Eyes by Janni Lee Simner
26. Keeper by Kathi Appelt
27. Body Finder by Kimberly Derting
28. Countdown by Deborah Wiles
29. Radiant Shadows by Melissa Marr
30. Chronicles of Vladimir Todd 8th Grade Bites by Heather Brewer
31. Popularity Papers by Amy Ignatow
32. Gimme a Call by Sarah Mlynowski
33. As Easy as Falling off the Face of the Earth by Lynne Rae Perkins
34. Remember Me by Sophie Kinsella
35. Ravenmaster's Secret by Elvira Woodruff
36. Feed by M.T. Anderson
37. The Boneshaker by Kate Milford
38. Abby Carnelia's One And Only Magical Power by David Pogue
39. The Talent Show by Dan Gutman
40. Magic Thief Found by Sarah Prineas
41. Spirit Bound by Richelle Mead
42. We Hear the Dead by Dianne Salerni
43. The Beautiful Between by Alyssa Sheinmel
44. My Life as a Book by Janet Tashjian
45. Delcroix Academy Book 1 The Candidates (ARC) by Inara Scott
46. City of Ships (Stravaganza) by Mary Hoffman
47. Bruiser by Neal Shusterman
48. Ghost Hunter (Chronicles of Ancient Darkness) by Michelle Paver
49. Touch Blue (ARC) by Cynthia Lord

Tell me about your reading. Do you keep a list or just read read read without looking back?
Posted by Joanne R. Fritz at 10:58 AM 3 comments: