Brain Aneurysm 102: A Valentine For All of You

Hey, it's almost Valentine's Day, so if you walk into your local bookstore, you might see this clever picture book by Michael Hall:

Or this sweet story by Joanne Ryder:

Or maybe this one by Maryann Cocca-Leffler just for fun:

But because it's nearly Valentine's Day, it's also time for...


INTRODUCING BRAIN ANEURYSM 102:
A CONVERSATION WITH MY BRAIN

My Brain: Hearts, you dolt. Valentine's Day is all about hearts. Not brains. Sheesh.

Me: Anyway, if you think about it, a brain aneurysm is a vascular problem, a bubble or bulge in an artery. And the bubble sometimes bursts (I'm one of the lucky ones whose aneurysm sealed itself immediately after rupturing). Arteries, of course, are part of the circulatory system, the one that carries blood to and from, ahem, the heart.

My Brain: Boy, you're really reaching here. Why don't you just go ahead and show them what you want to show them (*Nudge*). You know. That x-ray you're so fond of.

Me: How do you know exactly what I'm thinking? It's uncanny. It's almost as if you're--

My Brain: Yep. I know. YOUR BRAIN, you blooming idiot.

My Brain: Naw. Let's just tell 'em to visit the Brain Aneurysm Foundation's website, which has a lot more information that YOU seem capable of providing. Get on with the show, already. The part where you explain to these long-suffering people just exactly what your brain aneurysm has to do with Valentine's Day.

What follows is an actual x-ray taken of an artery in my brain in 2005 (back when I had a brain and it wasn't taking on a life of its own here on this blog). This was taken after my aneurysm ruptured and sealed itself and before my coiling procedure (which was done to prevent further, potentially fatal, ruptures). This shows my basilar artery, the thick vertical one that's supposed to be completely flat on top, but instead has an odd-shaped bulge protruding from the tip. THAT is my aneurysm. 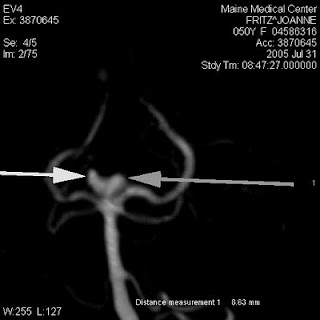 
My Brain: Oh, that was really lame. I can't believe I have to be associated with such a ridiculous piece of pseudo-bloggerism.

Me (ignoring brain entirely): And be sure to keep both your heart and your brain healthy by getting out of your chair and EXERCISING.

This will be my last post until March. I'm accepting Laurie Halse Anderson's challenge (thanks, Jeannine Norris , for the nudge) and I'm going to stop blogging and tweeting and facebooking (not that I spend much time there anyway) for a few weeks and get some writing done.

How about you? Let's start a blogging revolution.
Posted by Joanne R. Fritz at 8:39 PM 3 comments: