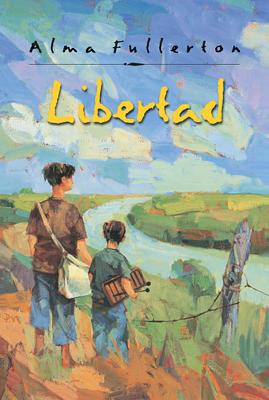 Synopsis (from Indiebound): With their father gone to America to make money for his family, Libertad, his little brother Julio and their mother scrape a living out of a dump in Guatemala City. Although it is too late for him, Libertad is determined that his little brother should go to school. Taught to play the marimba by his father, Libertad uses his talent as a street musician to raise enough money for his brother's school supplies. But his dreams for their future are destroyed when their mother is killed in a freak accident. Libertad must face the inevitable truth; they cannot survive on the streets of Guatemala City alone. There is only one thing to do. They must set out on the long and lonely journey to the Rio Grande River, where they plan to cross the water and enter the United States to find their father.

Why I recommend it:  Libertad means "freedom" and that's exactly what Libertad and his brother seek. A moving and inspiring story of brotherly love, strength, despair, and hope. Like any good verse novel, each poem stands alone, yet together the poems form a whole greater than its parts. Libertad, the boy, is a sympathetic character with a strong voice, and you'll find yourself cheering on both boys as they head north to find their father. Although I've read books by Pam Munoz Ryan and Christina Diaz Gonzalez and others, I still feel there aren't enough MG Latino novels being published, despite the fact that people of Hispanic origin are the largest ethnic minority in the US. So I was happy to find this one in my quest for verse novels.

Favorite lines: (from a poem called Games on page 4-5)

We collect our marbles, rushing
for the safety of our homes.
Tonight, even the moon is
afraid
to show its face
on our dump.

Bonus: Use as a springboard for timely discussions about the current political race and the immigrant experience.

THE CROSSOVER by Kwame Alexander: Celebrating Poetry Month with Novels in Verse 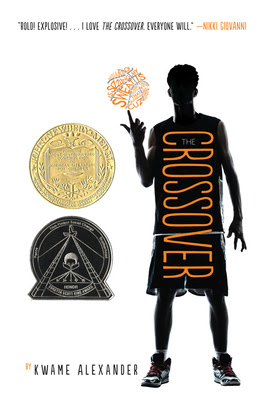 Synopsis (from Indiebound): "With a bolt of lightning on my kicks . . .The court is SIZZLING. My sweat is DRIZZLING. Stop all that quivering. Cuz tonight I m delivering, " announces dread-locked, 12-year old Josh Bell. He and his twin brother Jordan are awesome on the court. But Josh has more than basketball in his blood, he's got mad beats, too, that tell his family's story in verse, in this fast and furious middle grade novel of family and brotherhood.


Why I recommend it:  This is so much more than poetry. The words practically explode off the page. The poems vary from rap to free verse to Basketball Rules to definitions of Josh's vocabulary words. So much imagination and artistry went into the writing, it's easy to see why this won the Newbery in January 2015 and was also named a Coretta Scott King Honor book. I'm not even a basketball fan, but I loved this book.

Favorite lines (from a poem called The Second Half on page 181):

My brother is
Superman tonight.
Sliding
and Gliding
into rare air,
lighting up the sky


Bonus: This isn't just a novel about basketball and sibling rivalry. It's about a close-knit, loving family having to accept the father's illness.

What poetry are you reading for Poetry Month?

INSIDE OUT & BACK AGAIN: Celebrating Poetry Month with Novels in Verse 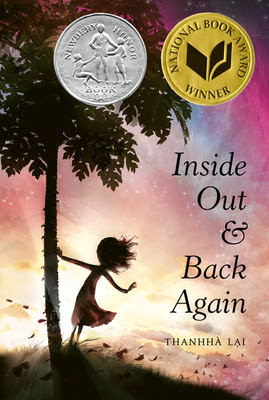 Synopsis (from the publisher):  For all the ten years of her life, Hà has only ever known Saigon: the thrills of its markets, the joy of its traditions, and the warmth of her friends close by. But now the Vietnam War has reached her home. Hà and her family are forced to flee as Saigon falls, and they board a ship headed toward hope—toward America.

Why I recommend it: The text is spare, with lots of white space on the page. Yet the imagery is gorgeous and colorful. I could taste the papaya, see the cramped boat on which they escape, feel Hà's anger and frustration at leaving home and starting over. Hà's voice is honest and childlike. Based loosely on the author's own childhood, the story is a deeply moving one. Like Hà, Thanhha Lai fled Vietnam with her family when she was ten, and moved to Alabama. Today she lives in Kansas.

The paperback edition includes suggested activities and an interview with the author.

Favorite lines: (from a poem called Twisting Twisting on p. 37)

Mother measures
rice grains
left in the bin.
Not enough to last
till payday
at the end of the month.

Bonus: Use this as a starting point for classroom lessons about the Vietnam War, and timely discussions about refugees and prejudice.

Have you read Inside Out & Back Again or any other novels in verse? What did you think of them?

Musings on writing my fifth novel

You read that right. I'm nearly finished writing the rough draft of my fifth novel. In the past nine years, I've written four MG novels and one YA, in addition to more than a dozen picture books. And no, in case you're wondering, I don't yet have an agent or a book contract. I've had fourteen publication credits to date, but they're all poems or flash fiction or micro fiction for adults.

Still, I keep writing for children and teens. Perseverance is my mantra.

But I have to admit, Novel #5 is, well, a little different. In what way?

I started an idea notebook for my fifth novel back in the late spring of 2015, so nearly a year ago. After gathering ideas, and working out character sketches and a setting and a conflict, I wrote three chapters. Almost immediately, I became stuck. Something didn't feel right about it. So I put it aside and revised my fourth novel instead.

And then, in September, after reading Full Cicada Moon by Marilyn Hilton (even though it wasn't the first verse novel I read), I had an epiphany.

This new novel? The one I was stuck on? It was meant to be written in verse.

I spent two months reading and studying verse novels and then in November 2015 I started writing Novel #5 all over again.

Am I crazy? Well, this doesn't feel crazy. It feels... right. Since making that decision, the process has changed for me. Writing a verse novel is the hardest thing I've done as a writer, but at the same time, it's like I've grown wings. I look forward to writing every day, which is something I never did with a rough draft before. Rough drafts are usually agony.

I've been accepted into the Highlights Foundation workshop on Novels in Verse which will take place in May. Who knows where this will lead? Maybe nowhere. But maybe, just maybe, something good will happen.

For the rest of April, in honor of Poetry Month, I'll be looking at a few of the verse novels I've studied in my quest to learn this new (for me) form.

Over the past few years, I've read, in approximately this order:

Out of the Dust by Karen Hesse
42 Miles by Tracie Vaughn Zimmer
May B. by Caroline Starr Rose (this made me first fall in love with verse novels)
Pieces of Georgia by Jen Bryant
The Surrender Tree by Margarita Engle
Impulse by Ellen Hopkins
Because I am Furniture by Thalia Chaltas
Where I Live by Eileen Spinelli
Another Day as Emily by Eileen Spinelli
Full Cicada Moon by Marilyn Hilton
Blue Birds by Caroline Starr Rose
The Crossover by Kwame Alexander
Home of the Brave by Katherine Applegate
Inside Out & Back Again by Thanhha Lai
Libertad by Alma Fullerton
Mountain Dog by Margarita Engle
Make Lemonade by Virginia Euwer Wolff
Love That Dog by Sharon Creech

(I've also read Brown Girl Dreaming by Jacqueline Woodson, which is actually an autobiography, and The One and Only Ivan by Katherine Applegate, which some consider prose poetry.)

What verse novels do you recommend? All suggestions are welcome.

Joanne R. Fritz
A former bookseller, I write children's books, poetry, and flash fiction. My short fiction and poetry have appeared in numerous literary journals and my children's fiction has appeared in Highlights. I'm a survivor of two ruptured brain aneurysms, twelve years apart, so I'm allowed to occasionally forget something. I am honored to be repped by Barbara Krasner of Olswanger Literary. My debut novel in verse, EVERYWHERE BLUE, will be published by Holiday House in 2021.