Where I've been and what happened to me

"I would really rather feel bad in Maine than feel good anywhere else."
E. B. White


Where I've been and what happened to me:

I'm going off topic here. Anyone who knows me or has followed this blog for a while knows that I survived a ruptured brain aneurysm in 2005. I always felt lucky, not just because I survived something most people don't but because it was the only aneurysm in my brain.

On September 29, 2017, my husband and I were enjoying the first full day of another vacation in Maine (we wanted to see the fall foliage) and at dinner I said to him, "I think you better take me to the hospital". Not that I have any memory of this.

Nor do I remember that next eight weeks.

Doctors at Maine Medical Center found two more aneurysms on the basilar artery (the same artery as my 2005 rupture) and one had ruptured. They coiled it and later also installed a shunt, to drain the excess blood in my brain.

It was a long recuperation (in fact, I'm still recuperating, even though I'm home now). After a month in the hospital, I went to a rehab center in Maine. And after six weeks there, they allowed us to come home to Pennsylvania and transfer to a different rehab center. This second rehab center is the only part I remember.

I don't know if those lost memories will ever come back to me, but in a way I'm not sorry. Who wants to remember being in pain, having your head cut open, and being hooked up to multiple machines? 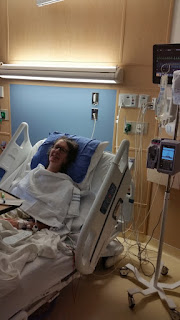 I know that I'm extremely lucky -- to have survived a rupture not once but twice in twelve years. I also had wonderful nurses and doctors and a supportive husband who visited me every day (my kids came when they could).

So my purpose today is to not only raise awareness of brain aneurysms but to let you know the blog is going to change. I will no longer be reviewing children's books on a regular basis. I'll still talk about an occasional superior book (how could I resist?) but I also want to share photos and thoughts on other topics. So it'll be "my brain on" other topics, not just books.

Bear with me as the blog reinvents itself.

And for more information on aneurysms, visit the Brain Aneurysm Foundation's website.