THE TRILOGY OF TWO by Juman Malouf for MMGM

First, some interesting news for fans of T.A. Barron's Young Merlin saga. They're making a movie! Woo hoo! And the script is being written by the co-writer of The Lord of the Rings movies, so there are high expectations for this film (and its possible sequels). That's excellent news for T.A. Barron fans.

Synopsis (from the publisher):  Twelve-year-old identical twins Sonja and Charlotte are musical prodigies with extraordinary powers. Born on All-Hallows-Eve, the girls could play music before they could walk. They were found one night by Tatty, the Tattooed Lady of the circus, in a pail on her doorstep with only a note and a heart-shaped locket. They’ve been with Tatty ever since, roaming the Outskirts in the circus caravans, moving from place to place.

But lately, curious things happen when they play their instruments. During one of their performances, the girls accidentally levitate their entire audience, drawing too much unwanted attention. Soon, ominous Enforcers come after them, and Charlotte and Sonja must embark on a perilous journey through enchanted lands in hopes of unlocking the secrets of their mysterious past.


Why I recommend it: Wow! This is a highly imaginative fantasy, with impressive world building by Malouf. It's set in a world that could be Earth in a far future (or an alternate past) when million-mile-high cities have overrun the planet. The author herself described it as a "post-apocalyptic, Dickensian world" in this article from The Daily Beast.

The twins are forced to travel to the Seven Edens, worlds they previously knew only as stories represented by the tattoos completely covering Tatty's skin. Luckily, they're accompanied by an intrepid band of new friends. So it's a classic journey story, a la Lord of the Rings or The Wizard of Oz, but with quite a few dark and startling twists. There is some violence, so I would not recommend this for younger middle grade readers. It's also quite lengthy, so give this to kids who love the longer Harry Potter books, or The Invention of Hugo Cabret.


Favorite line:  Charlotte ran through the gate and zigzagged among the broken-down railcars. She tried to remember pieces of music she used to play, but they all blended together in a tangle of notes. (from p. 71)


Bonus: Fantastically-detailed drawings by the author are the perfect accompaniment to this unusual story. Before she turned to writing and illustrating children's books, Juman Malouf was the set designer and costume designer for the film The Grand Budapest Hotel.

Readers, please note: After today, I'm taking a blogging break to catch up on my reading and writing, and also get ready for the holidays. I wish you all the happiest of holidays, no matter which holiday(s) you celebrate. Here's a photo of my TBR pile, all spread out. Hoping to get to these (and possibly more) before January. Wish me luck! 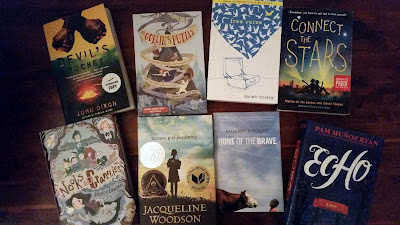 SWITCH by Ingrid Law, a companion to SAVVY

Synopsis (from Indiebound): Gypsy Beaumont has always been a whirly-twirly free spirit, so as her thirteenth birthday approaches, she hopes to get a magical ability that will let her fly, or dance up to the stars. Instead, she wakes up on her birthday with blurry vision . . . and starts seeing flashes of the future and past. But when Momma and Poppa announce that her very un-magical, downright mean Grandma Pat has Alzheimer's and is going to move in with them, Gypsy's savvy along with her family's suddenly becomes its opposite. Now it's savvy mayhem as Gypsy starts freezing time, and no one could have predicted what would happen on their trip to bring Grandma Pat home . . . not even Gypsy.

Why I recommend it: Fantastic voice, loads of imagination, and a really cool savvy. I'm a huge fan of Ingrid Law's first book, SAVVY, which won a Newbery Honor and was also the Number One Book Sense (now Indiebound) Children's Pick for Summer 2008. See my thoughts here, in the American Bookseller Association's archives. Another favorite, SCUMBLE (2010), is a companion to SAVVY which explores Cousin Ledge's unusual talent and how he learns to control it. Now, with SWITCH, another companion novel, we see the Beaumont family from the POV of Gypsy, younger sister to Mibs.

Bonus: Companion novels, instead of sequels, are a fun way to follow the same unusually-talented family but get to know different characters. Gypsy was only three in SAVVY, and now she's thirteen. It's like watching her grow up.

Favorite line: "The snowflakes hung like poetry over the city." (p. 239, after Gypsy freezes time)

I especially loved what happened when Gypsy stopped time, and wish I could do the same thing! What savvy do you wish you had?

A giveaway winner -- and for MMGM, a review of THE THING ABOUT JELLYFISH

First, I have a winner to announce. The winner of 101 MOVIES TO SEE BEFORE YOU GROW UP by Suzette Valle is:

Congratulations, Susan! I'll get your book out to you pronto.

And now we return to our regular Monday broadcast, er, feature, MMGM.  See Shannon Messenger's blog for the links to other Marvelous Middle Grade Monday posts.

The Thing About Jellyfish by Ali Benjamin (Sept 22, 2015, Little, Brown Books for Young Readers, ages 10 and up)

Synopsis (from Indiebound): After her best friend dies in a drowning accident, Suzy is convinced that the true cause of the tragedy must have been a rare jellyfish sting--things don't just happen for no reason. Retreating into a silent world of imagination, she crafts a plan to prove her theory--even if it means traveling the globe, alone. Suzy's achingly heartfelt journey explores life, death, the astonishing wonder of the universe...and the potential for love and hope right next door.

Why I recommend it: Beautiful writing and an expertly crafted plot. The simple, yet luminous language -- and Suzy's earnest desire -- makes this a joy to read, even though the subject matter is weighty with sadness. It's easy to see why The Thing About Jellyfish is a National Book Award Finalist (winners will be announced November 18) and has earned starred reviews from PW, Booklist, School Library Journal and others.

Suzy's grief is heartbreakingly realistic. I lost a good friend at age 10 (she rode her bike across a busy street and never saw the truck that hit her), so this moving story affected me deeply. This book should also win at least a Newbery honor in January.

Favorite line: They are moving silently, endlessly, all of them, through the darkness of the sea (from pg. 109).

Bonus: You're bound to learn something about jellyfish!

Have you read The Thing About Jellyfish?  If not, what MG novels have you read that deal poignantly with grief?