Words in the Dust - another Marvelous Middle Grade Monday

Yes, it's another Marvelous Middle Grade Monday (started by the inimitable Shannon Whitney Messenger).  Also check out Shannon O'Donnell's post here.   And Myrna Foster talks about another middle grade novel in this post. 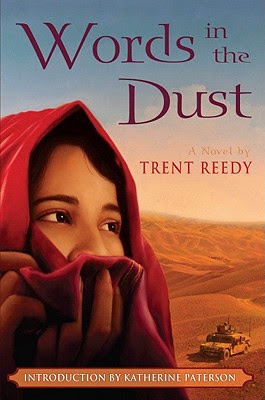 WORDS IN THE DUST, by Trent Reedy (Scholastic, January 2011, ages 9 to 13), is a debut novel written by a former soldier who served in Afghanistan.  Usually I shy away from books about another culture which are written by Americans, but I'm really glad I opened this one.  It captivated me from the first page.  The writing is clear and authentic, with great respect for the culture. The main character seems like a real girl, living in the wind and dust of Afghanistan, her chador wrapped around her face.

Zulaikha longs to be normal, to be able to eat and talk like other children.  She's tired of being called "Donkey-face" and chased by Anwar and his friends. She also yearns to go to school and learn to read. Her mother started to teach her, but then died. And Zulaikha's stern stepmother thinks women should only cook and clean.  So Zulaikha and her older sister Zeynab do all the chores while their little brothers play.  Their stepmother sends Zulaikha to the market because Zeynab, now of marriageable age, is too pretty to be in the streets alone. Out on yet another errand, Zulaikha meets a woman named Meena who knew her mother. Meena offers to teach her to read.  Can Zulaikha keep these tutoring sessions a secret?

Her father and older brother are welders, and Baba is excited because the American soldiers have arrived in their small village to build a new school, which means the promise of more work for Baba.

Then one of the soldiers notices Zulaikha's cleft palate.  The Americans insist they can help Zulaikha.  There is an operation that will fix her, but they would need to take her far from home in a helicopter.

Should Zulaikha dare to hope?

Includes: Introduction by Katherine Paterson, Pronunciation Guide, Glossary, Author's Note and Bibliography.  If you liked Shabanu by Suzanne Staples or The Breadwinner by Deborah Ellis, this book is for you.  Teachers and librarians, you'll definitely want to buy this one.  (Note to teachers & parents: there is one gruesome incident toward the end of this novel that may be too intense for the youngest readers; the publisher says 9 to 13, but discretion is advised for younger or more sensitive readers.)

I've already started my ongoing list for next year's possible Newbery winners. And this is the first book on it.   What marvelous Middle Grade book have YOU read this month?
Posted by Joanne R. Fritz at 3:43 PM