THE WARDEN'S DAUGHTER by Jerry Spinelli

I'm honored to be part of the blog tour for The Warden's Daughter, Jerry Spinelli's new novel! 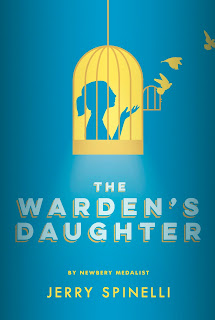 Synopsis (from the publisher): Cammie O'Reilly is the warden's daughter, living in an apartment above the entrance to the Hancock County Prison. But she's also living in a prison of grief and anger about the mother who died saving her from harm when she was just a baby. And prison has made her mad.

In the summer of 1959, as twelve turns to thirteen, everything is in flux. Cammie's best friend is discovering lipstick and American Bandstand. A child killer is caught and brought to her prison. And the only mother figures in her life include a flamboyant shoplifter named Boo Boo and a sullen reformed arsonist of a housekeeper. All will play a role in Cammie's coming-of-age. But one in particular will make a staggering sacrifice to ensure that Cammie breaks free from her past.


Why I recommend it: A new novel from Jerry Spinelli is always reason to celebrate. And this lovely historical novel revisits Two Mills, the town (based on Norristown, PA) that was the setting of Maniac Magee, my favorite Jerry Spinelli novel. Like all of Spinelli's novels, The Warden's Daughter is full of heart, sly humor, and gasp-inducing moments of drama. This one is also chock-full of 1959 culture (pedal pushers, crew cuts, convertibles) and of Philadelphia-area details, like Dick Clark's American Bandstand, Tastykakes, and scrapple. (I was born in Philadelphia and now live outside of it and yes, I've eaten scrapple, but I definitely do not like it!).

Cammie is a complex character who really grows on you, a curmudgeon of sorts, a 12-year-old who is not happy. But knowing about her past, you understand her and you feel for her. There are introspective chapters but there's also plenty of action, as Cammie rides her bike all over town and sometimes gets into fights. (There's a reason they call her Cannonball O'Reilly!)

Bonus: To hear more about The Warden's Daughter from the author himself, watch this brief video:


Here are the next few stops on the blog tour: