HOW I BECAME A GHOST by Tim Tingle for Diversity Monday 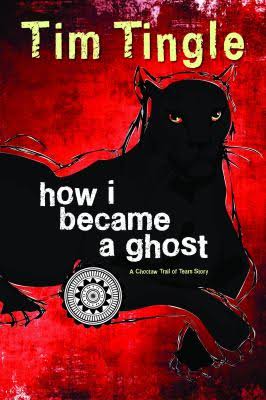 Synopsis (from the publisher): Told in the words of Isaac, a Choctaw boy who does not survive the Trail of Tears, How I Became a Ghost is a tale of innocence and resilience in the face of tragedy. From the opening line, "Maybe you have never read a book written by a ghost before," the reader is put on notice that this is no normal book. Isaac leads a remarkable foursome of Choctaw comrades: a tough-minded teenage girl, a shape-shifting panther boy, a lovable five-year-old ghost who only wants her mom and dad to be happy, and Isaac's talking dog, Jumper. The first in a trilogy, How I Became a Ghost thinly disguises an important and oft-overlooked piece of history.

Why I recommend it: This short, compelling novel will stun you with both the power of its writing and the way it humanizes a terrible event in our nation's past. The narrator, 10-year-old Isaac, tells us about his family and some of the other families on the forced walk from their homeland in the Deep South to their new home in what would eventually be called Oklahoma. His story will move you to tears at the extraordinary resilience of the Choctaw people. First the U.S. soldiers set fire to their homes, then made the people walk a thousand miles in brutal icy conditions, with very little food. Many of the Choctaw died from smallpox-laden blankets given to them deliberately by the soldiers. Written in spare and rhythmic language, this is a story that will infuriate you but at the same time inspire you.The way Isaac is able to help his people even after he becomes a ghost is heartwarming.

I learned some Choctaw words from reading this book. Hoke means okay. Yakoke means thank you. And Choctaws never say goodbye. Instead they say chi pisa lachike, meaning "I will see you again, in the future."

Bonus: This is the first volume of a trilogy! I'm definitely planning to read the others when they become available.

Tim Tingle is an Oklahoma Choctaw, whose great-great-grandfather walked the Choctaw Trail of Tears in the 1830s.

It's Diversity Monday here at My Brain on Books. Look for other diverse posts at Pragmatic Mom,  Jump Into a Book, and The Logonauts.

The #DiverseKidLit linkup theme this month is human rights.