Guest Post from Laurie Wallmark for ADA BYRON LOVELACE AND THE THINKING MACHINE ... plus a Giveaway! 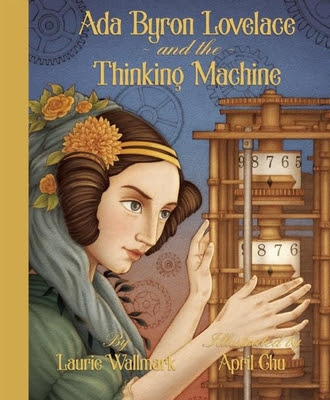 Today, I'm honored to have my friend Laurie Wallmark take over my blog for a guest post! Laurie and I met at the very first SCBWI conference I ever attended, Eastern PA's Pocono Retreat in 2008. I'm thrilled for Laurie that she's making her picture book debut with Ada Byron Lovelace and the Thinking Machine, coming from Creston Books in October. Giveaway details at the end. Take it away, Laurie!

Writing a picture book biography is not as simple as starting with “She was born on…” and ending with “She died on…” Because of a picture book’s limited word count, this type of cradle to grave biography, with its details of every event in a person’s life, simply won’t work. Instead, you need to choose a focus for your story. In other words, you need a “hook.”

Your hook is your own unique perspective on the person’s life. For picture books, it may be helpful to concentrate on a single aspect of the person’s life, such as: character, childhood, home life, or professional contribution. Any scenes that don’t serve to further the reader’s understanding and appreciation of your chosen facet should be eliminated.

One possible way to focus the story is to limit most of the text to a specific time period in the subject’s life, often childhood. Many people believe this will help children identify more with the person, making the book more interesting. This method works quite well in these three situations: 1) If your subject is famous, so you don’t need to use some of your precious word count explaining her accomplishments; 2) If the subject is known for an activity that children also do, such as painting, working with animals, or sports; or, 3) If your subject works in a profession familiar to children, such as firefighter, teacher, or astronaut. In these cases, the author only needs a line or two of text to sum up the subject’s professional life, because children can fill in the gaps themselves.

Ada Byron Lovelace, the subject of my picture book biography, fits none of these three situations. She’s not famous (yet!). In fact, most people have never heard of her. Few children program computers, though I’m happy to say that’s changing. Finally, most children don’t really know what software engineers do.

I do love a challenge, though. I couldn’t show Ada using computers as a child, since computers didn’t yet exist. Instead, I included events from her childhood to illustrate both her personality and her love of mathematics. In order to introduce children to her professional accomplishments, I gave simple explanations in the text and saved the more technical details for the back matter. My hope is that children will read Ada’s story and be inspired to learn more about her and STEM (science, technology, engineering, and math).


ADA BYRON LOVELACE AND THE THINKING MACHINE (Creston Books, October 2015) is a picture-book biography of the world’s first computer programmer. Ada was born two hundred years ago, long before the invention of the modern electronic computer. At a time when girls and women had few options outside the home, Ada followed her dreams and studied mathematics. This book, by Laurie Wallmark and April Chu, tells the story of a remarkable woman and her work. Kirkus Reviews describes the book as a “splendidly inspiring introduction to an unjustly overlooked woman.” [starred review]

Join Laurie as she travels from blog to blog to introduce her debut picture book, Ada Byron Lovelace and the Thinking Machine.

Laurie Wallmark writes exclusively for children. She can't imagine having to restrict herself to only one type of book, so she writes picture books, middle-grade novels, poetry, and nonfiction. She is currently pursuing an MFA in Writing for Children and Young Adults at Vermont College of Fine Arts. When not writing or studying, Laurie teaches computer science at a local community college, both on campus and in prison. The picture book biography, Ada Byron Lovelace and the Thinking Machine (Creston Books, October 2015), is Laurie’s first book.

Thank you so much, Laurie. It was a pleasure having you on my blog.


And now for the giveaway details. Laurie has generously offered one signed, hardcover copy of Ada Byron Lovelace and the Thinking Machine to one lucky winner. To enter, you must be a follower of this blog and you must comment on this post. If you mention this giveaway on Twitter or other social media, please let me know in the comments and I'll give you an extra chance for each mention. This giveaway is open to US mailing addresses only and will end at 10pm EDT on Sunday October 11, 2015. The winner will be announced on Monday Oct 12, 2015. Good luck!