Timmy Failure: Mistakes Were Made

So how did I do for Screen-Free Week? Well... I have to admit it was hard. Mistakes were made, which ties in perfectly with the book I'm featuring this week.

I managed to stay off Facebook, Twitter, LinkedIn, YouTube -- no problem. Staying away from TV was not that big a deal, since I don't watch that much anyway. Except, gulp, Jeopardy! I actually watched it the first night without thinking. Mea culpa. Mistakes were made.

Staying away from all of your blogs and my own was tough. Okay, yes, I admit I visited Katia's because it's in my email feed and when I saw that I'd won a book from her I had to go thank her! And DL Hammons was having a contest... So yes, mistakes were made.

You may not realize how often you use the internet in your daily life. First thing Monday April 29th, I turned on my laptop to look up directions to this place*, and I thought, Wait a minute! I can't do this. It's Screen-Free Week.  I continued to struggle with this for days. I wanted to look up a thousand things. For the most part, I was able to stay away, but it was difficult. How quickly we've all become accustomed to instant information.

On the plus side, I managed to read three books and write several thousand words on my current MG novel. I cleaned out our closet, got outside a lot, and worked on my flowerbeds. So I'm not a total failure. :) And on Tuesday my husband and I visited:

Timmy Failure: Mistakes Were Made written and illustrated by Stephan Pastis (Feb 26, 2013, Candlewick, for ages 8 to 12, first book in a new series) 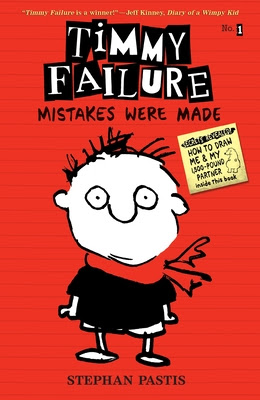 Source: hardcover borrowed from a friend (Thanks, Mariga!)

Synopsis (from Indiebound): Take Timmy Failure — the clueless, comically self-confident CEO of the best detective agency in town, perhaps even the nation. Add his impressively lazy business partner, a very large polar bear named Total. Throw in the Failuremobile — Timmy’s mom’s Segway — and what you have is Total Failure, Inc., a global enterprise destined to make Timmy so rich his mother won’t have to stress out about the bills anymore. Of course, Timmy’s plan does not include the four-foot-tall female whose name shall not be uttered. And it doesn’t include Rollo Tookus, who is so obsessed with getting into "Stanfurd" that he can’t carry out a no-brainer spy mission.

Why I liked it: It's hilarious! Timmy's constant misinterpretation of the clues makes him a bumbling detective like Peter Sellers in the Pink Panther movies. This will definitely appeal to fans of Wimpy Kid and Big Nate and should be a hit with reluctant readers. The chapters are short and accompanied by lots of drawings. The characters are quirky (I love the librarian, who looks like he belongs in Hell's Angels). The illustrations definitely add to the charm, as they're often showing something different from what Timmy is telling us.

If Stephan Pastis sounds familiar, he's a cartoonist and the creator of Pearls Before Swine. This is his first book for children.

Have you read Timmy Failure? If not, what illustrated middle-grade book is your favorite?