... to figure out how to write a humorous middle grade novel, I've been researching till my eyes are bleary. Researching? I mean reading, of course!

And it all fits in perfectly, not only with MMGM (See Shannon's blog for the other links) but also with Deb Marshall's Middle Grade May Reading Challenge!

So besides Timmy Failure (last week's recommendation), what did I read so far? Three paperbacks I purchased at my local used bookstore. 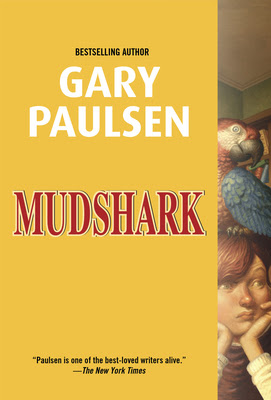 Mudshark by Gary Paulsen (Paperback published by Scholastic 2010, for ages 8 to 12)

Synopsis: Mudshark is cool. He's fast-thinking and fast-moving, and with his photographic memory, he's the go-to guy with the answers. Lost your shoe? Can't find your homework? Ask Mudshark. At least, until the Psychic Parrot takes up residence in the school library.
The word in school is that the parrot can out-think Mudshark. And right now, the school needs someone who's good at solving problems. There's an escaped gerbil running the halls, a near-nuclear emergency in the faculty restroom, and an unexplained phenomenon involving disappearing erasers. Once Mudshark solves the mystery of the erasers, he plans to investigate the Psychic Parrot. . . .

Why I liked it: This has to be the shortest MG book I've ever read. At 83 pages, and with fairly large print, this would have strong appeal for reluctant readers. But mostly it's downright funny, in a silly sort of way. Gary Paulsen manages to pack a lot into those 83 pages -- his characters are quirky, his dialogue is spot-on, and the mystery is intriguing (as an adult reader, though, I admit I found it a bit anticlimactic).

Sideways Stories From Wayside School by Louis Sachar (Paperback published 1985 by Avon, for ages 8 to 12) 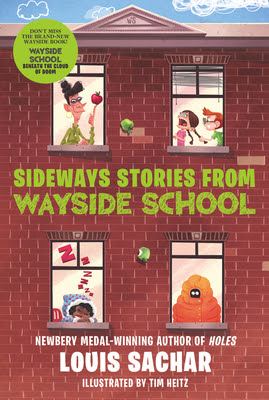 Synopsis: There'd been a terrible mistake. Wayside School was supposed to be built with thirty classrooms all next to each other in a row. Instead, they built the classrooms one on top of the other...thirty stories tall! (The builder said he was very sorry.)

That may be why all kinds of funny things happen at Wayside School...especially on the thirtieth floor. You'll meet Mrs. Gorf, the meanest teacher of all, terrible Todd, who always gets sent home early, and John who can read only upside down--along with all the other kids in the crazy mixed-up school that came out sideways.

What I thought: This was Louis Sachar's first published book (and Louis is the yard teacher at Wayside School). I'm sure I read this many years ago, but I really didn't remember much of it. This time around, I found it a little odd, to say the least. There were quite a few laugh-out-loud moments, but on the whole I prefer Holes. However, if you have a kid reader with an unusual sense of humor (my younger son adored this book in third grade), these strange little stories would be just right. And they're very short. So there's that.

There's A  Girl in My Hammerlock by Jerry Spinelli (Paperback published 1992 by Trumpet Club/Bantam Books, for ages 9 to 13) 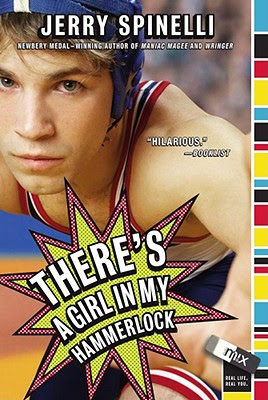 Synopsis: Maisie Potter isn't quite sure why she signed up for the boys' wrestling team. She's never been all that interested in boys, so it can't have anything to do with Eric Delong, in spite of the disturbing effect his smile has on her. And she's certainly not prepared for the effect her presence on the team has on the people around her.


Her brother's totally disgusted with her, her best friend drops her, her classmates ridicule her, and opposing teams forfeit rather than wrestle her. But Maisie's not a quitter, and she discovers that she really likes wrestling -- and that while Eric might not be worth the flak she puts up with, feeling good about herself is.

Why I liked it: Maisie! She's feisty and stubborn and really comes to life here. You know I love Jerry Spinelli books, and usually the more serious ones, like Maniac Magee or Stargirl. This book has some really funny moments, and Spinelli's trademark older kid/younger kid interaction (Maisie has a kid sister named P.K. who's adorable) but at the same time tackles a serious subject: gender stereotyping.

Note: When the hardcover was published in 1991, this may have broken new ground, but today it does seem a little dated. And I find the title and this newer cover image misleading. It's written from Maisie's POV. But this book was by far my favorite of the three.

So what have I learned from my research?

-- Many contemporary middle grade books have a humorous element even if they're not "funny" books.

-- Laugh-out-loud books are NOT the ones I remember the most or love the most.

What do you think? Are the funny MG books the ones you remember and love? Or the deeper, more serious books?
Posted by Joanne R. Fritz at 7:00 AM