Hiding Out at the Pancake Palace by Nan Marino

We're nearly finished Deb Marshall's #MiddleGradeMay Reading Challenge and I've already surpassed my goal of reading at least 10 MG books (I read 12). Next week, I'll be interviewing Jennifer Angus and giving away a signed hardcover copy of her book as part of the blog tour for In Search of Goliathus Hercules. So be sure to come back for that. 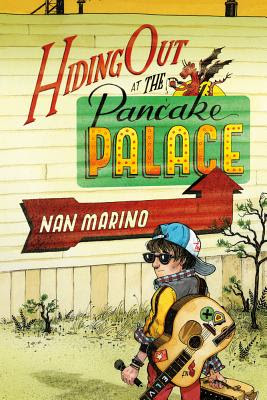 Hiding Out at the Pancake Palace by Nan Marino (Roaring Brook Press, April 2013, for ages 8 to 12)

Synopsis (from Indiebound): Eleven-year-old musical prodigy Elvis Ruby was supposed to win the most coveted reality show on television, TweenStar. None of the other contestants even came close to his talents. But in the middle of the biggest night, with millions of people watching, Elvis panicked and froze on national TV. So Elvis must run from the paparazzi camped outside his door and spend the summer working with his aunt and cousin at Piney Pete's Pancake Palace in the remote wilds of New Jersey. It's the perfect place to be anonymous, that is until Elvis meets Cecilia, a girl who can't seem to help blurting out whatever's on her mind.

Why I liked it:  Quirky characters, an unusual premise, and a gorgeously-rendered setting, which itself becomes one of the main characters. The Pine Barrens of New Jersey are brought to life beautifully here and it's obvious that Nan Marino loves them. She lives in a town that borders the Pinelands,where she's a librarian. (I also loved the reveal near the end. There's a reason Elvis froze up and it's not what you think it is!)

Have you read any middle grade books where the setting becomes a character?