In Search of Goliathus Hercules Blog Tour -- and a Giveaway!

Today, I'm participating in the blog tour for In Search of Goliathus Hercules.

Source: hardcover review copy from the publisher in exchange for an honest review. 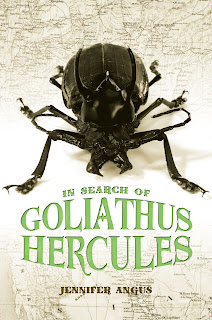 Synopsis (from Indiebound): In 1890, Henri Bell, a near-orphan, is sent to live with his ancient great-aunt and her extensive button collection. One rainy afternoon, Henri strikes up a conversation with a friendly fly on the windowsill and discovers he possesses the astounding ability to speak with insects. Thus commences an epic journey for Henri as he manages a flea circus, commands an army of beetles, and ultimately sets out to British Malaya to find the mythical giant insect known as Goliathus hercules. Along the way he makes friends both insect and human, and undergoes a strange transformation of his own.

Why I liked it: Packed with adventure and imagination, this is a fascinating story that will appeal to fans of fantasy, historical fiction, and adventure novels. Henri (pronounced On-ree) is a sympathetic character, especially as he begins to take on unusual characteristics. Though it's a thick book (350 pages) it's fast-paced and exciting enough to keep you turning pages.


And now, an exclusive interview with Jennifer Angus! 1) Hi, Jennifer and welcome to My Brain on Books! You are, first and foremost, an artist and a professor of Design Studies at The University of Wisconsin/Madison. You've had numerous successful exhibits of your Victorian-style wall pieces. Is it true that you use real insects in your patterns? And how did you become interested in insects?

Yes, all the insects I use are real, that is with the exception of Goliathus Hercules himself who I created in the great tradition of hoaxes with the parts of several insects and gold glitter (everything is better with glitter!). That’s the most common question I get asked and people also want to know if their colour is natural which it most certainly is. I’m crazy but not crazy enough to start painting thousands of insects.

Like most professors part of my job is to do research. I was researching tribal minority dress in Northern Thailand when I stumbled upon a garment from the Karen tribe that had a fringe of green metallic beetle wings. I was stunned. Other than butterflies I had never thought of insects as being beautiful. Through further research I’ve discovered other groups, primarily in Asia that use insects as embellishment and actually in the Victorian era round sequin-like shapes were cut from beetle elytra (the hard protective outside wing) and applied to fancy fabrics. I always say that I my interest in insects really grew out of my research and love of textiles.

2)  What made you decide to take the next step and write a book about the insect world?

I never intended to write a book. Really Goliathus Hercules was born when I mounted an exhibition of the same name at the John Michael Kohler Arts Center in Sheboygan. WI. The most common questions I get asked about my artwork are:

Those questions got me thinking about collecting and the prestige of having the rarest specimen or the largest specimen. For the exhibition I decided to create an alter ego who is a great adventurer and collector. Goliathus hercules is the name of the fictitious insect I have discovered and collected! The name alludes to the Latin nomenclature insects are given, and obviously it is a very large and strong creature. The bigger the insect, the more awe and prestige it will garner. Included in the exhibition was a diary I have created, a record of the explorer's arduous journey in the name of science and fame. Not coincidentally, the diary begins on April 1st.  You can read the diary entries here http://www.jenniferangus.com/Exhibitions/2005_2004_exhibits/goliathus_diary.htm

I enjoyed creating exhibitions with a narrative and I furthered my story with a trilogy of exhibitions  all called “A Terrible Beauty.” I also created an online, storybook version of the narrative which you can see here http://digitalthreads.ca/en/nature/artwork.cfm Eventually a small children’s publishing company invited me to write the story that underlies the exhibitions.

3) The illustrations in the book are fascinating. Not only have you designed borders and chapter headings with patterns of insects, but you also used what look like old photos and postcards. It makes the book seem more realistic since you have photos of Henri and his friends and Henri's nemesis, Mrs. Black. Did you scour antique stores for photos from the era? Or are these recreations?

Most of the photos were purchased on E-bay although there are also photographs of objects that I owned and had previously used in my exhibitions such as the five year diary and the cricket cage buttons. I created many illustrations of Mrs. Black in her various disguises by simply Photoshopping her face into the antique photographs. That was a lot of fun and at some point I’ll put up the ones that didn’t make it into the book on my web site.

4) While reading this, I thought of Franz Kafka's Metamorphosis, but also of Roald Dahl and even The Wizard of Oz (Mrs. Black reminded me a bit of Miss Gulch. And of course you have a motley crew of individuals who go on a quest). Were there any particular middle-grade novels that influenced you? Did you read a lot of novels before writing this, or did you just start writing?

I agree that Mrs. Black owes a lot to Miss Gulch, particularly in her appearance. I found her absolutely frightening as a child. I’m not sure that any particular book from my childhood influenced my writing but reading aloud to my son who is now almost 16 probably had a greater impact. Together we really enjoyed reading Kenneth Oppel’s Silverwing Saga (4 books) that is about a family of bats. He also wrote Airborn and although Oppel never reveals its era exactly, it seems Victorian in a steam punk kind of way.

When I was a child I read Dahl’s Charlie and the Chocolate Factory (and loved it) but that’s the only one of his books I ever read at that time. My mother was a great storyteller and my brother and I really preferred that she tell us a story than read anything. She told stories about growing up on Woodland Farm (the real Woodland Farm) and how she would go down a magic well to other lands where in one everything was blue and in another everything was yellow. We loved it and of course we believed it all because they were her adventures. I think that my mother instilled a real love of stories and adventure.
5) Is there a sequel in the works? Or are you writing something new?

I have ideas for further adventures of Henri and his friends. We’ll see if people want to read them.


Now for my giveaway!

Please note that this giveaway is open to addresses in the U.S. and Canada ONLY.  Albert Whitman will give away one SIGNED hardcover copy of In Search of Goliathus Hercules to one lucky winner. To enter, all you need to do is follow this blog (click on Join This Site in the sidebar) AND leave a comment on this post! This giveaway will end on Sunday, June 16, 2013, and the winner will be announced on Monday, June 17. Good luck!