WHAT THE DOG SAID for MMGM 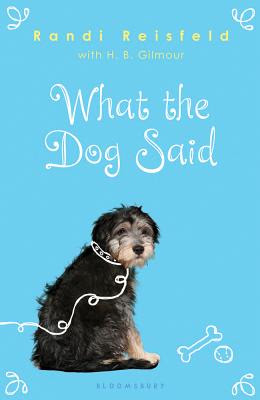 
Synopsis (from Indiebound): Ever since her police officer father was killed a few months ago, Grace Abernathy hasn't wanted to do much of anything. She's pulled away from her friends, her grades are plummeting . . . it's a problem. The last thing Grace wants is to be dragged into her older sister Regan's plan to train a shelter dog as a service dog. But Grace has no idea how involved she'll get - especially when a mangy mutt named Rex starts talking to her. Has Grace gone off the deep end? Or might this dog be something really special - an angel? A spirit? Either way, he is exactly the therapy that Grace needs.

Why I liked it:  The dog talks!  And makes jokes! How adorable is that?  It reminds me of one of my favorite childhood movies, The Shaggy Dog (no, not that newer Tim Allen version, sheesh, no!  I'm talking about that old Fred MacMurray Disney movie, the one with Annette Funicello and Tommy Kirk and Tim Considine and Moochie.  Yes, I'm old.  It's a hopeless case.)

But this book is smartly updated with the current trend of rescuing dogs.  The service dog training scenes are believable.  Grace's grief for her dad is realistic. I actually expected this book to be kind of silly, considering the talking dog, but in the end I found it sweet and touching.

Sadly, H.B. Gilmour, Randi Reisfield's co-author on the T*Witches and Clueless books, passed away from lung cancer before this book could be completed. Together, they had come up with an idea for a dog detective who speaks.  After H.B.'s death, Randi shelved the book for a while until she had a brainstorm: to rewrite it as a tribute to H.B, ditch the doggie detective idea and give Rex a higher purpose.

What do you think, readers?  Can a dog be an angel?  Or a spirit to help people who are grieving?


Marvelous Middle Grade Monday is the brainchild of Shannon Messenger. Other regulars include (but are not limited to):

Shannon O'Donnell at Book Dreaming
Myrna Foster at The Night Writer
Natalie Aguirre at Literary Rambles
Brooke Favero at Somewhere in the Middle
Deb Marshall at Just Deb
Barbara Watson at her blog
Anita Laydon Miller at her middle grade blog
Michael Gettel-Gilmartin at Middle Grade Mafioso
Pam Torres at So I'm Fifty
Ms. Yingling at Ms. Yingling Reads
Danika Dinsmore at The Accidental Novelist
Jennifer Rumberger at her blog
Akossiwa at Nye Louwon--My Spirit
Gabrielle Prendergast at angelhorn
Sheri Larsen at her blog
Gina Carey at her blog
Posted by Joanne R. Fritz at 6:30 AM