Yes, I'm back from Revision Beach!  I really missed reading all your blogs and participating in the MG love.  Revisions are going well, but not as well as I'd hoped (so I may take some more time off soon).  I've just about finished Draft 3 of my own MG novel.  After another six or ten revisions, I may even be ready to start querying! :)  I started a query letter, so that's progress.  And I'm working my way through the agent interviews over at Literary Rambles.

But enough about me.  Let's talk about a Middle Grade novel I'm swooning over. 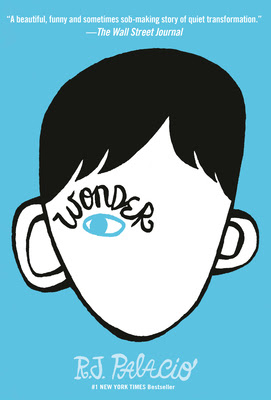 "When given the choice between being right and being kind, choose kind."  Dr. Wayne Dyer

Synopsis (from Indiebound):  I won't describe what I look like. Whatever you're thinking, it's probably worse.

August (Auggie) Pullman was born with a facial deformity that prevented him from going to a mainstream school—until now. He's about to start 5th grade at Beecher Prep, and if you've ever been the new kid then you know how hard that can be. The thing is Auggie's just an ordinary kid, with an extraordinary face. But can he convince his new classmates that he's just like them, despite appearances?

Why I liked it:  Astonishingly realistic characters populate an inspiring story with short chapters. That format and the clear, straightforward writing help to make a difficult subject easy to handle.  Auggie doesn't really have special needs.  He's just "different."  You never know that much about his face, other than that his eyes are too far down and he doesn't exactly have ears.  People are shocked when they first see him.  The mean kids compare him to Gollum or ET or an orc.  But Auggie's used to it.

Be prepared to feel emotionally invested in this story of a boy coping with an unusual challenge. The first part is narrated by Auggie, but then the middle of the book is narrated by others, including his older sister, his best friend, and others involved in his life. I love how all these different voices combine to tell Auggie's story from different viewpoints.  It really helps you get to know him better and understand what it must have been like for him to have this face.  Long before I reached the end, I felt Auggie had become a real person.

This book is going to win multiple awards.  And they'll be well deserved.  I'll go on record right now as predicting this will definitely win the Schneider Family Award.  But I hope it also garners at least a Newbery honor next January.

Read a marvelous interview with the author from The Observer that explains the origin of the book.

What books about kids who are "different" have you read and loved?


Marvelous Middle Grade Monday is the brainchild of Shannon Messenger. Other regulars include (but are not limited to):


(Edited to include the blogroll! Because I've been away so long I forgot, heh heh.)
Posted by Joanne R. Fritz at 6:30 AM