Kaspar the Titanic Cat for MMGM

This April 15th marks the 100th anniversary of the sinking of the Titanic, so there are a lot of new books (and old ones!) on display at the bookstore right now. 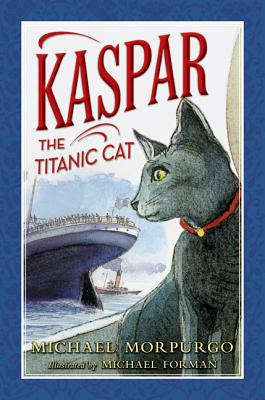 Synopsis (from the publisher): When Kaspar the cat first arrived at London’s Savoy Hotel, it was Johnny Trott who carried him in. After all, Johnny was a bellboy and was responsible for all of Countess Kandinsky’s things— including Kaspar. But when tragedy befalls the Countess during her stay, Kaspar becomes more than Johnny’s responsibility: Kaspar is Johnny’s new cat, and his new best friend.

And when Kaspar and Johnny meet Lizziebeth, a spirited young heiress, they find themselves journeying across the Atlantic with Lizziebeth’s family on England’s newest and most magnificent ship, the Titanic. Because there is always adventure in the air with a cat like Kaspar around. After all, he’s Kaspar Kandinsky, Prince of Cats, a Londoner and a New Yorker and, as far as anyone knows, the only cat to survive the sinking of the Titanic. . . .

Why I liked it:  This is a sweet story and easy to read.  The author was the writer-in-residence at the Savoy Hotel in London for three months in 2007 (do American hotels do this?) and was inspired to write this story by the black statue of a cat which the hotel uses as a fourteenth "guest" whenever an "unlucky" group of thirteen sits down to dine.

Michael Morpurgo has written more than 100 books, and you may recognize him as the author of  War Horse. He's great at making animals sympathetic characters.  But unlike last week's MMGM post, this is no talking animal story.  Johnny, the 14-year-old bellboy, tells the story.  Kaspar remains a somewhat mysterious figure, being a cat.  He'll still tug at your heart, especially when the nasty head housekeeper at the Savoy suspects Johnny is breaking the rules and keeping a cat in his room.  And you'll laugh when Lizziebeth, who is about eight years old, saves the day by meowing.

The title of the book is somewhat misleading, because the voyage on the Titanic only takes up a portion of the book (it's a few chapters and the disaster at sea is clearly described in a straightforward manner that shouldn't be too scary for younger readers -- after all, they've probably read the Magic Tree House version!).  In fact, after doing a little research, I discovered that this book is actually a new edition of an earlier publication, Kaspar, Prince of Cats, a "picture story book" published by Harpercollins in 2008, with full color paintings by Michael Foreman.  Too bad we only get black and white drawings in the new edition, although anything by Michael Foreman is lovely.

Have you read any memorable Titanic books?

Marvelous Middle Grade Monday is the brainchild of Shannon Messenger. Other regulars include (but are not limited to):

Shannon O'Donnell at Book Dreaming
Myrna Foster at The Night Writer
Natalie Aguirre at Literary Rambles
Brooke Favero at Somewhere in the Middle
Deb Marshall at Just Deb
Barbara Watson at her blog
Anita Laydon Miller at her middle grade blog
Michael Gettel-Gilmartin at Middle Grade Mafioso
Pam Torres at So I'm Fifty
Ms. Yingling at Ms. Yingling Reads
Danika Dinsmore at The Accidental Novelist
Jennifer Rumberger at her blog
Akossiwa at Nye Louwon--My Spirit
Gabrielle Prendergast at angelhorn
Sheri Larsen at her blog
Gina Carey at her blog
Andrea Mack at That's Another Story
Posted by Joanne R. Fritz at 6:30 AM