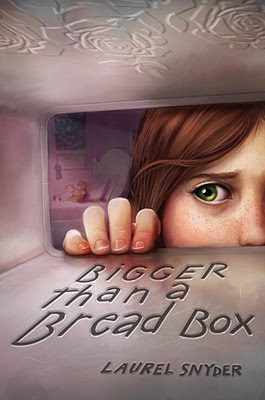 Synopsis (from publisher): A magical breadbox that delivers whatever you wish for—as long as it fits inside? It's too good to be true! Twelve-year-old Rebecca is struggling with her parents' separation, as well as a sudden move to her Gran's house in another state. For a while, the magic bread box, discovered in the attic, makes life away from home a little easier. Then suddenly it starts to make things much, much more difficult, and Rebecca is forced to decide not just where, but who she really wants to be. Laurel Snyder's most thought-provoking book yet.

Why I liked it:  Coolest premise ever for a middle grade.  It reminded me of The Indian in the Cupboard, but instead of bringing little plastic toys to life, Rebecca can have anything she wants (an iPod, a phone, money, even food from her favorite restaurant back in Baltimore!) as long as it can fit inside a bread box.  Wouldn't that be any kids' dream?  But of course, she quickly realizes having shiny new things isn't bringing her parents back together. And it can't even keep her in the cool clique (who've accepted her because of the candy and gum she hands out), because when she wishes for something unique that belongs to another girl, Rebecca finally realizes the truth about the bread box.  Then she has to face a difficult truth about herself.

Despite being a fantasy, this is a realistic look at separation and divorce from the kid's point of view, and also about being the new kid in school.

What middle grade books have you read about kids wishing for something they can't have?  Or about being the new kid?

Other regulars:
Shannon O'Donnell at Book Dreaming
Myrna Foster at The Night Writer
Sherrie Petersen at Write About Now
Natalie Aguirre at Literary Rambles
Brooke Favero at Somewhere in the Middle
Deb Marshall at Just Deb
Barbara Watson at Novel and Nouveau
Anita Laydon Miller at her middle grade blog
Michael G-G at Middle Grade Mafioso
Pam Torres at So I'm Fifty
Posted by Joanne R. Fritz at 12:30 AM