I'm happy to announce the winner of this contest.  With a guess of 2417, the winner is:


Michael G-G
We actually drove 2396 miles, so he came within 21 miles!  That's close!  Michael, expect an email from me shortly asking for your choice of books and your address.
And for anyone who is wondering how the heck we drove to an island, the answer is this:
That's not my photo, unfortunately.  I never got a good one of the bridge itself.  So here's one I took of a license plate. Confederation Bridge was completed in 1997, and since it took four years and over a billion Canadian dollars to build, they're all justifiably proud of it. 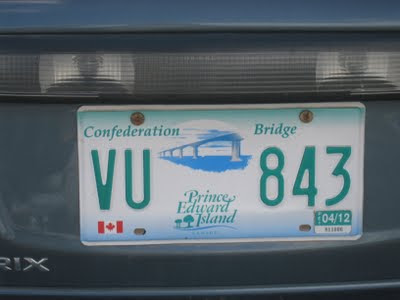 It's 13 kilometers long, so it's definitely the longest bridge in Canada, though not in the world.  Still, it's a lot different from when Anne of Green Gables took the ferry to Prince Edward Island!
Congrats to Michael!  And thanks to all who entered.
Posted by Joanne R. Fritz at 10:09 AM

Email ThisBlogThis!Share to TwitterShare to FacebookShare to Pinterest
Labels: contest