Good news! Breonna's Law passed last week! No-knock warrants are now illegal in Louisville, Kentucky. But there's still a long way to go. Breonna's murderers haven't yet been charged. #JusticeforBreonna would like you to sign the petition, demanding Louisville's mayor fires and arrests the officers responsible.  #SayHerName
And this law really should be passed all over the country!
Tuesday, June 16 (Day 99):
Still educating myself about BIPOC and Black Lives Matter. And yes, I fully realize what a privilege it is to be doing this, instead of experiencing racial injustice firsthand!
Here's a comprehensive list of anti-racist children's books from Publishers Weekly. I've read a few so far and have more on order. Can't wait to read Kekla Magoon's How It Went Down. You may remember Kekla from her Facebook post on my earlier pandemic diary entry. 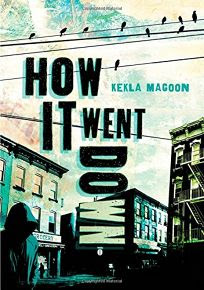 In additon, the pandemic is still very much with us. Here's a quote I feel is important (from the Washington Post, June 16, 2020):
“I understand how people must be very tired of this at this point,” Francis S. Collins, director of the National Institutes of Health told them. “But the virus doesn’t care that we’re tired. The virus is still out there.”

And it's still the first wave, people! It's not even a second wave yet. Many states, especially in the South and West, are experiencing surges in virus cases since reopening. Stay home if you can. And please continue to take precautions if you must go out. Masks are essential.
Wednesday, June 17 (Day 100):
Yes, we have been sheltering in place for 100 days! Did you ever imagine we'd still be doing this? It seems a lot of Americans think the pandemic is over. But it's not! Some states, like Florida, Texas, and Arizona, have surging numbers since reopening. And no, it's not because of increased testing.
Was Day 100 any different than any other day? Mostly, not (for me anyway). Had a long phone chat with an older relative who called me. A lovely surprise.
Aside from that, I received an email from my editor at Holiday House, telling me she loves the latest revision (my responses to her line edits, which I sent her in late May) and saying it's a pleasure to work with an author who is flexible about revisions. That gave me a nice feeling!
Helped my husband with the Accidental Garden. This is mostly his project (started after our spruce tree blew down in that wind storm in late April).  No vegetables yet, but everything looks green and healthy. The tomato plants are thriving. 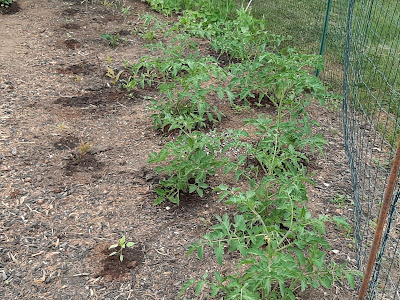 But only two of our potato plants have grown. Don't know what happened to the other four. My husband hilled up the dirt, as you're supposed to when the plants are six to eight inches high. Glad he knows all this stuff! (Those yellow flowering shrubs in the background are, we believe, St. John's Wort. We didn't plant them. The previous owners did.) 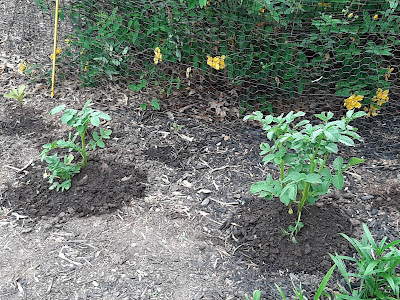 And the peas are starting to climb the fencing, they way they should. 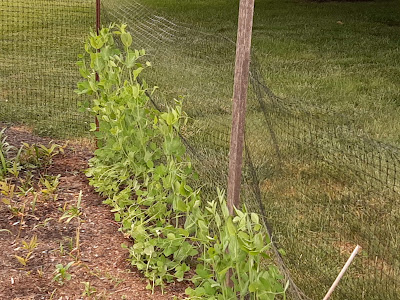 As for my continuing education, today I read this chart from Vox.com about systemic racism. We white people have so much to learn!
Thursday, June 18 (Day 101):
Beautiful sunny day after an early morning rain. It's starting to feel really hot here in southeastern Pennyslvania.
Good news! The Supreme Court upheld DACA! We Need Diverse Books has a list of suggested reading.
But then I read an alarming article about climate. According to the headline of an article from today's Guardian,  the "world has six months to avert climate crisis." Here are the first two paragraphs (italics mine):

The world has only six months in which to change the course of the climate crisis and prevent a post-lockdown rebound in greenhouse gas emissions that would overwhelm efforts to stave off climate catastrophe, one of the world’s foremost energy experts has warned.

“This year is the last time we have, if we are not to see a carbon rebound,” said Fatih Birol, executive director of the International Energy Agency.

The report goes on to say that wind and solar power should be the main focus, but we also need to build more energy-efficient buildings.

Here's another article I found interesting today, one interviewing Dr. Anthony Fauci about the coronavirus.
Friday, June 19 (Day 102):
Yes, today is Juneteenth. By now you should know what Juneteenth is, if you didn't already. I first learned about it years ago, when I worked at the bookstore. (Everything I know, I learned from children's books!) I hope that in the future, our children will learn about significant events like this in school!
There are, of course, many newer books about Juneteenth, both for children and for adults. Here's a graphic from coloursofus.com: 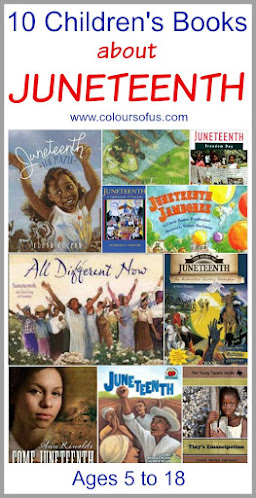 I subscribe to the Washington Post and their Friday newsletter "The Five-Minute Fix", usually written by Amber Phillips. But today, she handed it over to Eugene Scott, another writer for the Post.
"There's more fanfare than in years past for Juneteenth, more official recognition by businesses and state and local governments of the day as a holiday than ever before in its long history. That’s the case because it coincides with a national reckoning on race. "
Scott had conversations with five scholars and activists, including Keisha Blain, history professor at the University of Pittsburgh, and president of the African American Intellectual History Society. I started following her on Twitter.
Blain has this to say in answer to Scott's question, "What is the media getting wrong?":
Blain: "Well, the media has gotten several things wrong. One, they keep calling the uprisings the George Floyd protests. What you’re saying is that people are protesting his death specifically and only. This did not begin with his death. What we can argue is that this particular incident is the straw that broke the camel’s back, but the danger in calling it the George Floyd protest is we minimize the problem and say all we have to do is address police violence and police brutality. But we fail to address the fundamental problem, and that is structural racism — which no one really wants to talk about. From my perspective, we’ll know when we‘re headed in the right direction when we’re no longer feeling comfortable. We have to break free from the comfort zone."
Good point, Keisha Blain! Let's try to break free from our comfort zone.

For me, the highlight of today was a visit from our younger son, a few days before both Father's Day and our 35th anniversary (this coming Monday). He stayed and talked to us for over two hours. It was threatening rain so we sat on deck chairs inside our garage, more than six feet apart from him.  (Yes, there's room! We sold my car last year because since my second brain aneurysm rupture, I no longer drive. Saves money too!)
While he was here, our son checked out our garden and managed to take a photo of our newest visitor. I suspect this is an antheraea polyphemus, or Polyphemus moth. It's huge! We've lived here for over 28 years and I've never seen one of these before. 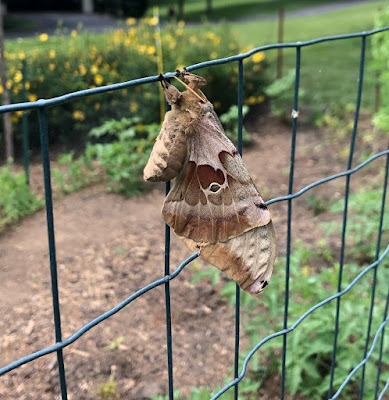 Saturday, June 20 (Day 103):
Read an opinion piece this morning from the Washington Post, written by a former Camden (NJ) police chief, J. Scott Thompson. The headline: "As Camden's police chief, I scrapped the police force and started over. It worked." Perhaps other cities might consider following this example. Camden was once considered the most dangerous city in the country. If you can't access the Post or don't want to read the entire article, here's an excerpt (italics mine):
So we started from scratch. We let every city police officer go and created a new department with new rules in 2013. By agreement with Camden County, the city ceased to fund its department and instead paid the county to police the city of Camden. We required all officers to apply as new hires (most officers from the old force got jobs, but not all) and committed to a new relationship between Camden’s police and its citizens, around 95 percent of whom are minorities.
The only thing that bothers me about this? The police chief is white, in a city where 95 percent of the citizens are NOT white! Do you find that odd?
According to today's Guardian article, Florida's Covid-19 surge shows their reopening plan is not working!
COVID-19 World Stats as of June 20 (from WHO):
Confirmed cases: 8,690,140
Confirmed deaths: 461,274
US COVID-19 Stats as of June 20 (from the CDC):
Confirmed cases: 2,215,618
Confirmed deaths: 119,055
Currently reading: All American Boys by Jason Reynolds and Brendan Kiely (2015, Scholastic, for ages 14 and up). Two teens, one black and one white, deal with the aftermath of a mistaken shoplifting and a violent act by a cop. It seems as if it was written today, but it's five years old! Told in alternating viewpoints, this is a powerful story so far. 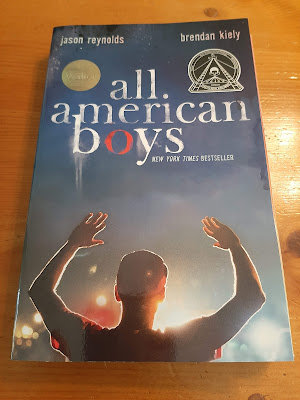 What are you reading this week? Have you read any good articles you'd like to share? And do you do any gardening?
Posted by Joanne R. Fritz at 7:51 AM