I'm hopeful that justice will finally be served for Breonna Taylor, killed by police in her own home in March. Those police officers have not yet been arrested. If you're interested in donating to the GoFundMe set up by her sister, please go here. If you'd like to take action, go to #JusticeForBreonna.


What you probably didn't see last week: Peaceful protests about the killings of George Floyd and other Black Americans.

The main stream media mostly didn't show you those last week when they were showing images of riots and clashes with police and tear-gassed crowds.

Hundreds of people gathered peacefully in places like Washington, DC (from The Guardian): 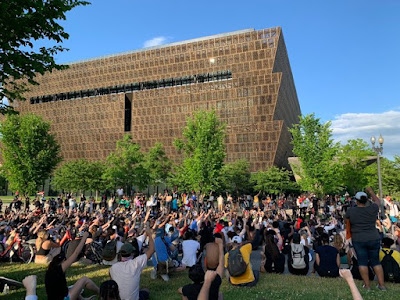 Rochester, NY (from the Democrat and Chronicle): 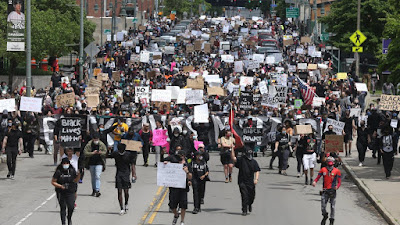 And even Minneapolis, MN (photos from my cousin): 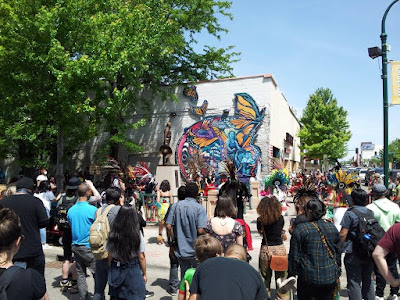 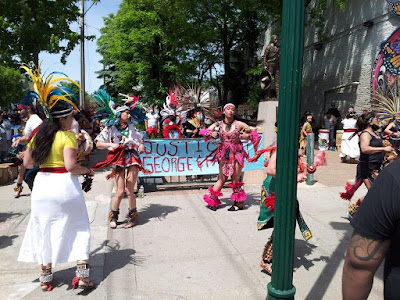 Not much social distancing going on in any of these protests, and I hope the virus doesn't come roaring back. It's still with us, people! Of course, "Racism is far more deadly than Covid." - Kunaal Hathi (on Facebook)

Then there was Trump's "photo op" in front of an Episcopal church near the White House (a church long considered the church of Presidents). Before he and his (all white) companions walked to the church, police moved in with pepper spray and rubber bullets to disperse the crowd, a crowd peacefully and lawfully protesting in the public park across the street. Using their first amendment rights! And it wasn't even 7 pm yet (the curfew).

Episcopal Church leaders were quick to condemn the incident. From Religionnews.com:
The Rt. Rev. Mariann Budde, the bishop of Washington who helped organize the clergy presence at the church, said Trump’s arrival at St. John’s happened without warning and left her “outraged.”
“The symbolism of him holding a Bible … as a prop and standing in front of our church as a backdrop when everything that he has said is antithetical to the teachings of our traditions and what we stand for as a church — I was horrified,” she told Religion News Service.
“He didn’t come to pray. He didn’t come to lament the death of George Floyd. He didn’t come to address the deep wounds that are being expressed through peaceful protest by the thousands upon thousands. He didn’t try to bring calm to situations that are exploding with pain.”

Tuesday, June 2 (Day 83):
Yesterday, I emailed my cousin who lives in Minneapolis. Today, he replied with photos and a long email thread about the mostly peaceful protests, but also looting and violence since then. He suggested the people smashing windows were young white men. Shame! 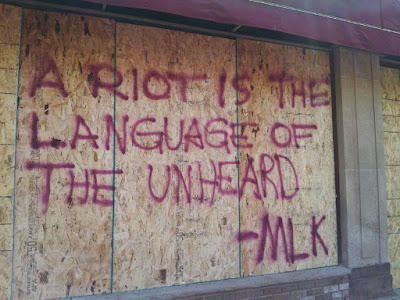 Lovely walk after dinner. The weather is beautiful, although it was cloudy and cool this morning.

Wednesday, June 3 (Day 84):
Threatening to rain all morning and finally rained by noon. Power went out over a good part of eastern PA. But we didn't lose power ourselves. Received an email from Giant, that our grocery delivery scheduled for tomorrow has been canceled because of the outage! They saved my list, though, and suggested I try for a new delivery. Was able to snag Sunday morning. Luckily, we have leftovers to eat, and burgers in the freezer.
Currently reading LONG WAY DOWN by Jason Reynolds, the National Ambassador for Young People's Literature. I'm making an effort to read more books by black authors. A friend sent me these: Anti-racism resources for white people. Important stuff! All white people need to read this.

Very hot by the afternoon. The first really hot day this year.

Watched a Kidlit Rally for Black Lives (live Facebook event) sponsored by The Brown Bookshelf and SCBWI. Many kidlit authors spoke about the protests, about being anti-racist, and about what books by Black authors all children should read. Some of my favorite authors spoke. Jacqueline Woodson, Jason Reynolds, Kwame Alexander, and lots more. A lot of tough words. And a lot of love! Black Lives Matter because Black lives are the ones in danger. 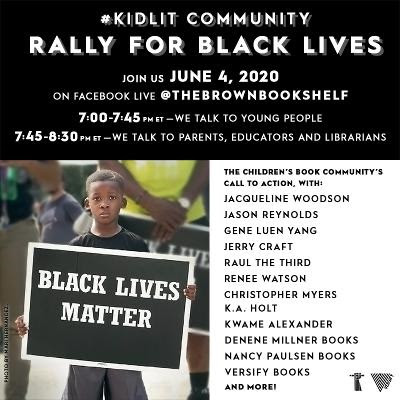 As of 12:01 am, my area of Pennsylvania entered the Yellow phase of the pandemic recovery. But I don't think it's over, by any means, so I'm still not going anywhere. My husband and I have agreed to continue staying home for now, at least until June 15th. That's the date we've picked to reassess the stats from our area to see if the virus is getting better or worse after so many gatherings in public places all over the country. Not just the protests, but all those people who insisted on going to the beach on Memorial Day weekend! Seems pretty selfish, doesn it?

Rainy day. Decided to bake Honey Oat bread. Turned out fine, but it tasted a little bitter. Still trying to figure out why. The recipe called for only 1/4 cup of honey and I suspect it should be more than that.

Finished reading LONG WAY DOWN by Jason Reynolds. What a powerful novel! Whew. If you've never read it, I highly recommend it. Don't want to give away the plot, but it takes place in a brief time, and mostly in an elevator going down to the lobby. Took a long walk in the evening -- and surprised a deer crossing the road! 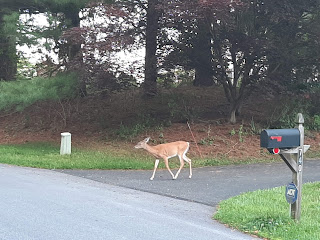 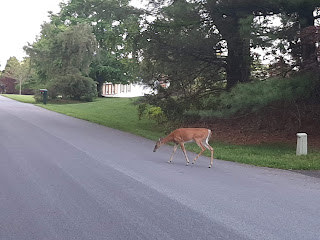 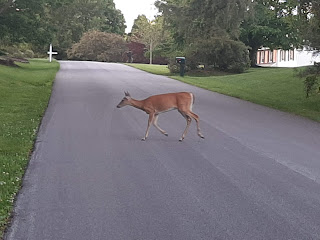 Seemed a fitting end to the day. I was amazed she didn't seem at all afraid of me.

How was your week? Were you involved in any protests? Did you read anything interesting (a book or perhaps an article on how to be anti-racist)? Please share with us. Thank you!