JUMP INTO THE SKY for a marvelous Middle Grade Monday! 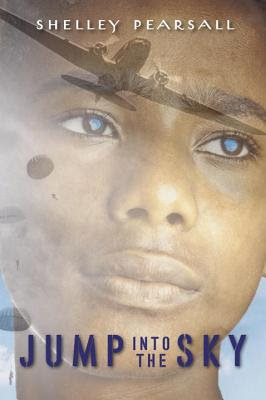 Synopsis (from Indiebound): Levi Battle's been left behind all his life. His mother could sing like a bird and she flew away like one, too. His father left him with his grandmother so he could work as a traveling salesman—until Levi's grandmother left this world entirely. Now Levi's staying with his Aunt Odella while his father is serving in the U.S. Army. But it's 1945, and the war is nearly over, and Aunt Odella decides it's time for Levi to do some leaving of his own. Before he can blink, Levi finds himself on a train from Chicago to Fayetteville, North Carolina, where his father is currently stationed—last they knew.

So begins an eye-opening, life-changing journey for Levi. First lesson: there are different rules for African Americans in the South than there are in Chicago. And breaking them can have serious consequences. But with the help of some kind strangers, and despite the hindrances of some unkind ones, Levi makes his way across the United States—searching for his father and finding out about himself, his country, and what it truly means to belong.

Why I liked it:  This is historical fiction at its finest. Told in a realistic 13-year-old boy's voice, Pearsall's moving and at times humorous novel isn't afraid to tackle tough topics like discrimination and abandonment.  You'll also learn about a little-known aspect of World War II: the black paratroopers of the 555th battalion. The characters are wonderful, from Levi to Aunt Odella, to Cal and Peaches, the Fayetteville couple who give Levi a temporary home, to the mysterious old Maw Maw Sands, who seems to know everything, and finally to Levi's father himself, the almost legendary Charlie Battle.

As you read, you'll feel you are right there, in 1945. The scene in the grocer's in Fayetteville is etched in my memory, and I read this book more than two months ago.  Levi's just gotten off the train from Chicago.  He's hot and thirsty and he sees a Coca-Cola sign in the grocer's window.  But when he enters the shop and puts his money down on the counter, the grocer hands him a dusty grape soda instead and points a gun in Levi's face.  It's Levi's first experience with a white man in the South. And it's dramatic and intense.  I wouldn't be the least bit surprised if this novel wins a Newbery honor in January.

For more MMGM recommendations, please visit the blogs in my sidebar to the right.  And if you're not in my sidebar, and should be, please let me know!

Please remember to stop by Literary Rambles today for Natalie Aguirre's interview with Lenny Lee and a giveaway!
Posted by Joanne R. Fritz at 7:00 AM