I'm back with a Marvelous MG Monday: CHAINS and FORGE... and writing advice from Laurie Halse Anderson!

I'm back! Did you miss me?  Okay, show of hands, how many people didn't even realize I was gone??

Yes, I'm back from Revision Beach (sorry, I hate caves!) and I managed to finish Draft 5 of the MG novel that I've been working on for three years. Woo hoo!! So I'm here, at least for a few weeks.  I've really missed keeping up with all your wonderful blogs, but I stayed away for a reason. My hero, Laurie Halse Anderson taught us something during a workshop at the Eastern PA SCBWI Poconos retreat in April.  It was her "magic formula" for writing success.

And I'm going to share it with you, because I feel selfish keeping it a secret.  Are you ready?


For every 10 hours you spend writing, you may spend 5 hours reading and ONE HOUR on the internet OR watching TV.  That's right.  One hour.  I can hear the groans now, but that, my friends, is how Laurie Halse Anderson got where she is. 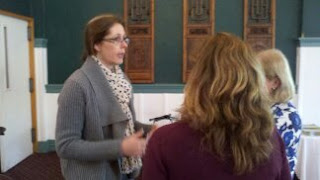 And to prove that she does have a sense of humor and isn't just a harsh taskmaster, this is how Laurie signed my copy of FORGE: 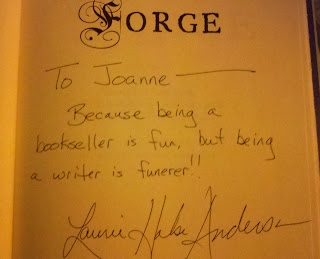 Now, on to today's double MMGM: 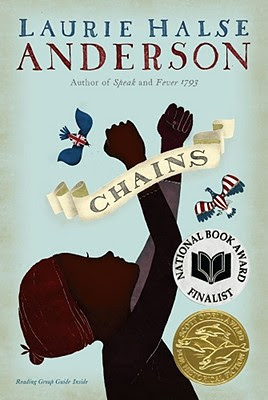 Chains by Laurie Halse Anderson (Seeds of America, Book One, paperback published January 2010 by Atheneum, for ages 10 and up)

Source: paperback purchased from the bookstore where I work!

Synopsis (from Indiebound):  If an entire nation could seek its freedom, why not a girl?

As the Revolutionary War begins, thirteen-year-old Isabel wages her own fight...for freedom. Promised freedom upon the death of their owner, she and her sister, Ruth, in a cruel twist of fate become the property of a malicious New York City couple, the Locktons, who have no sympathy for the American Revolution and even less for Ruth and Isabel. When Isabel meets Curzon, a slave with ties to the Patriots, he encourages her to spy on her owners, who know details of British plans for invasion. She is reluctant at first, but when the unthinkable happens to Ruth, Isabel realizes her loyalty is available to the bidder who can provide her with freedom.

Why I liked it: Isabel is such a smart, strong character and so full of life and humor and love for her sister that you just can't help admiring her. You also can't help being incensed by her lack of freedom and the atrocities that she and the other slaves had to endure (which is why this isn't appropriate for younger readers). I learned an incredible amount about the Revolutionary War through the eyes of a young slave.  How many of you knew that landowners in Rhode Island had slaves, just as those southern plantation owners did?

The story continues in Forge, but this time it's from Curzon's point of view. 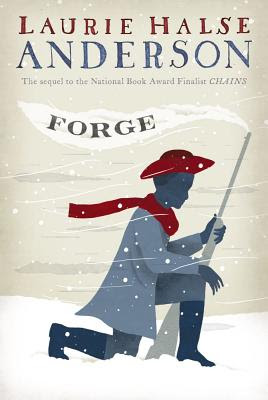 Forge by Laurie Halse Anderson (Seeds of America, Book Two, paperback published April 2012 by Atheneum, for ages 10 and up)

Source: hardcover purchased at the SCBWI Poconos Event (thanks to bookseller Lucy!)

Synopsis (from Indiebound): Blistering winds. Bitter cold. And the hope of a new future. In this compelling sequel to Chains, a National Book Award Finalist and winner of the Scott O’Dell Award for Historical Fiction, acclaimed author Laurie Halse Anderson shifts perspective from Isabel to Curzon and brings to the page the tale of what it takes for runaway slaves to forge their own paths in a world of obstacles—and in the midst of the American Revolution.

The Patriot Army was shaped and strengthened by the desperate circumstances of the Valley Forge winter. This is where Curzon the boy becomes Curzon the young man. In addition to the hardships of soldiering, he lives with the fear of discovery, for he is an escaped slave passing for free. And then there is Isabel, who is also at Valley Forge—against her will. She and Curzon have to sort out the tangled threads of their friendship while figuring out what stands between the two of them and true freedom.

Why I liked it:  I loved seeing things from Curzon's perspective after we'd gotten to know him slightly in Chains.  And since I live in Pennsylvania, not far from Valley Forge, I was fascinated by the details about that long winter encampment.  This is actually a great read for a hot summer day, because you'll feel half frozen along with Curzon and his fellow soldiers.  There are moments in this book that make you gasp, and moments that make you cheer.

I'm looking forward to the third book in the trilogy, Ashes.  But there isn't even a publication date yet.  Laurie told us she has to finish her current YA novel, then she'll write Ashes.  So it might be Fall 2013 or even later.  Sigh.

For other MMGM participants, please see my sidebar!
Posted by Joanne R. Fritz at 7:00 AM