A Real Winner -- and a False Prince

First, I need to announce the winner of the SIGNED hardcover copy of JAKE AND LILY by Jerry Spinelli (please note that I have the book, but it will be signed on May 22 at Chester County Book & Music Company):

Congratulations!  Expect an email from me asking for your signing preferences and your mailing address.
And for those who didn't win, don't forget my other giveaway for an ARC of DEVINE INTERVENTION by Martha Brockenbrough.  You still have a few more days to enter at THIS POST. 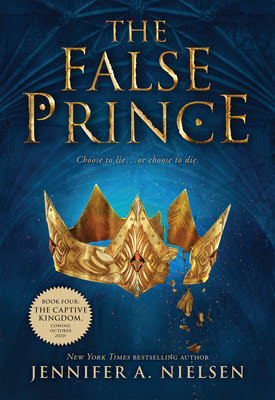 Synopsis (from Indiebound): The False Prince is the thrilling first book in a brand-new trilogy filled with danger and deceit and hidden identities that will have readers rushing breathlessly to the end.

In a discontent kingdom, civil war is brewing. To unify the divided people, Conner, a nobleman of the court, devises a cunning plan to find an impersonator of the king's long-lost son and install him as a puppet prince. Four orphans are recruited to compete for the role, including a defiant boy named Sage. Sage knows that Conner's motives are more than questionable, yet his life balances on a sword's point -- he must be chosen to play the prince or he will certainly be killed. But Sage's rivals have their own agendas as well.

As Sage moves from a rundown orphanage to Conner's sumptuous palace, layer upon layer of treachery and deceit unfold, until finally, a truth is revealed that, in the end, may very well prove more dangerous than all of the lies taken together.

An extraordinary adventure filled with danger and action, lies and deadly truths that will have readers clinging to the edge of their seats.

Why I liked it:  What's not to like? Adventure, intrigue, false identities, exciting swordplay: this book has it all!   The publisher says it's for 8 to 14, but I'd call this upper middle grade -- there is some violence, so be forewarned if you're thinking of giving this to an 8-year-old.   I love the character of Sage, who narrates the tale. I love his sarcasm and street smarts -- and that cool trick he does with the coin.

It's hard to talk about this book without giving away the secret, so I won't say more other than I really loved the story.  It pulled me in and made me forget the contemporary world existed.

Marvelous Middle Grade Monday is the brainchild of Shannon Messenger.  For other MMGM bloggers, see my new bloglist over on the right!
Posted by Joanne R. Fritz at 7:00 AM