YA Friday -- Pennsylvania authors edition, Part Three! EVERYBODY SEES THE ANTS by A.S. King -- plus a GIVEAWAY!

Yes, you read that very long title correctly.  There will be a GIVEAWAY of a SIGNED hardcover copy of Everybody Sees the Ants.  But first, the review: 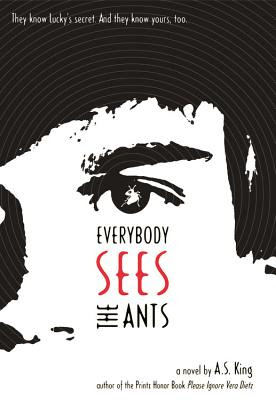 Everybody Sees the Ants by A.S. King (Little, Brown, 9780316129282, October 2011, $17.99, ages 15 and up).
Source: advanced reading copy from publisher
Synopsis (from the publisher and Indiebound):  Lucky Linderman didn't ask for his life. He didn't ask his grandfather not to come home from the Vietnam War. He didn't ask for a father who never got over it. He didn't ask for a mother who keeps pretending their dysfunctional family is fine. And he didn't ask to be the target of Nader McMillan's relentless bullying, which has finally gone too far.
But Lucky has a secret--one that helps him wade through the daily mundane torture of his life. In his dreams, Lucky escapes to the war-ridden jungles of Laos--the prison his grandfather couldn't escape--where Lucky can be a real man, an adventurer, and a hero. It's dangerous and wild, and it's a place where his life just might be worth living. But how long can Lucky keep hiding in his dreams before reality forces its way inside?

Why I liked it: This book blew me away.
I had no idea you could do things like this in a YA novel.  Or that a YA novel could encompass so many themes (bullying, war, the effects of torture, the long suffering of MIA families, feminism, family issues) and especially that they could all mesh so well. A.S. King is an amazing writer. But the best part of this novel is the character of Lucky.  He's totally believable and real, and despite all the crap that he's been through, he stays positive and utterly likeable.
Oh, and it's funny.  Really.
There are three things I especially love about this novel that aren't mentioned in the publisher's synopsis at all (you can only fit so much into a synopsis):
1) The character of Ginny and what she does with her hair.  Yes!
2) The touch of magical realism when Lucky brings something back from each dream.
3) Lucky's unusual coping mechanism of seeing ants.  When the ants gave Lucky a standing ovation, I laughed, I cried, I cheered.  For a book that tackles some very tough issues, this is one amazingly uplifting tale.
Yes, A.S. King (also known as Amy) lives in Pennsylvania.  In fact, she's been to the bookstore where I work at least three times now.  Most recently, we even sat down and talked together, while she ate red beans and rice and I, um, didn't.  She graciously agreed to answer a few questions for me. 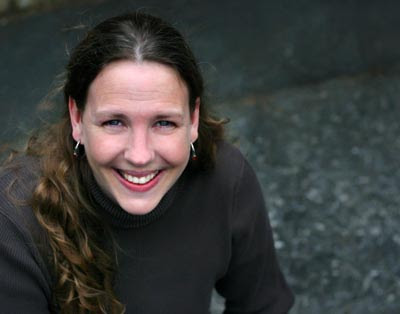 1) You have stated that EVERYBODY SEES THE ANTS is not a book about bullying so much as an anti-war novel. Which anti-war novels have influenced you the most?
Well, I didn’t mean to say it wasn’t at all about bullying. It certainly is a book about bullying, but for me, when I step back from it, it’s a book about torture and how our society has an absurd habit of ignoring everyday torture instead of trying to do something about it. My favorite anti-war novels are Catch-22 by Joseph Heller, Slaughterhouse Five by Kurt Vonnegut Jr. and A Farewell to Arms by Ernest Hemingway.
2)  Oh, I love Slaughterhouse Five!  One of my favorites of all time.  Amy, the jungle dream sequences in your book provide some intense and moving moments between Lucky and his Granddad Harry. How did you come up with this storyline?
Coming up with this idea was no different than coming up with any other book idea for me. I’m inspired by the non-fiction I read and the Vietnam War is something that has always fascinated me. Then, when I started to learn about the National League of POW/MIA Families, I was blown away by what those families go through. When I started to write Lucky, a boy who felt emotionally abandoned by his own father, I realized that he knew more about how to help his father, Vic, than Vic himself did—and that was why he turned to Granddad Harry in his dreams.
3) What made you think of using the ants as Lucky's coping mechanism? Why ants instead of, say, spiders? Or birds? Or dragons?
I help run my community swimming pool and ants are one of those things that show up at a swimming pool. They’re not there a lot…but if you drop a French fry, give it an hour and there will be ants. Since Lucky started seeing the ants as he was beaten at ground level at the pool, the ants appeared and were his friends from that moment forward. Also, there are no dragons at my pool.

4) Oh, very funny, Amy!  What advice would you give aspiring writers, especially those struggling to publish young adult novels?
I’m horrible at advice because many writers want so many different things from their efforts, so I’ll offer this. Write well. Try your best to write well. Write a lot. And try to keep the writing separate from the publishing. The first question I got this week from a room full of 5th graders at the New York Public Library was, “Are you rich?’
I shook my head no and said, “I am not even close to rich.”
To which they answered, “How old are you?”
And I said “How old do you think I am?”
And they all called out numbers that started with twenty to make me feel better about not being rich. Anyway, it played well for me 30 minutes later when I asked them, “So, since you know I’m not rich, then why do you think I do this?”
All of them got the answer on the first try. “You like it.”
I said, “I love it. I’d do it 12 hours a day every day if I could.”
As hokey as that sounds, it’s the best advice I can give anyone about writing. Love it.
5)  That's wonderful advice.  Thanks, Amy!  Now... tell us your favorite guilty pleasure. C'mon. Please??
This is such an impossible question for me. I rarely do things that make me feel guilty in that way that a guilty pleasure does. I’m really not trying to be difficult.  So, okay, I feel guilty when I eat more than one bowl of tortilla chips at night. That’s it. I don’t buy anything that makes me feel guilty. The only other thing I do that makes me feel guilty is work too much because I don’t see my family enough. So I don’t think that counts and we’re back to tortilla chips. We could call the answer to this question “Confessions of a Boring Tortilla-chip Eating Nerd.”
Thank you for having me on the blog, Joanne! And for your years of support. I am grateful more than you know!
Thank you, Amy!  It was a pleasure having you at the store.
And now...
(drum roll, please)
I have a SIGNED hardcover copy of Everybody Sees the Ants to give away!  This giveaway is open internationally.  You must be at least 15 to enter.   Giveaway ends Wednesday, November 9 at 11:59 PM EST.  To enter, simply be a follower and comment on this post.
Extra point for tweeting!   But please let me know (I'm @booksnbrains).
Another extra point for mentioning on your blog.
Another extra point for mentioning on Facebook (yeah, I'm on there too - and go play Gardentopia while you're at it -- I know the designer).
Good luck!  Has anyone read any of A.S. King's other novels?  Here's my review of Please Ignore Vera Dietz, which went on to win a Printz Honor award.
(*coughs*)  Attention, everyone:
I'm sticking my neck out and predicting that Everybody Sees the Ants will also win at least a Printz Honor. What book do you think will win?
Posted by Joanne R. Fritz at 1:00 AM