Marvelous Middle Grade Monday - A Ghost Story that's not just for Halloween! AND pics of Richard Peck visit AND a giveaway!

Whew!  That's a lot to pack into a blog post.  But I'll try to do it all as briefly as possible so you can get on with your day.  Oh, and Happy Halloween.  Feels more like December here in the Northeast US!  Hope y'all didn't lose power. 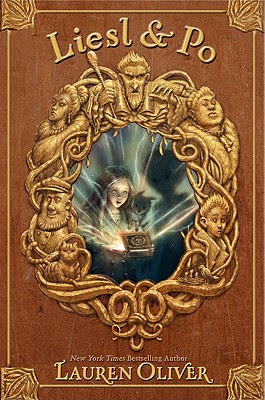 Synopsis (from Indiebound): Liesl lives in a tiny attic bedroom, locked away by her cruel stepmother. Her only friends are the shadows and the mice—until one night a ghost appears from the darkness. It is Po, who comes from the Other Side. Both Liesl and Po are lonely, but together they are less alone.

That same night, an alchemist's apprentice, Will, bungles an important delivery. He accidentally switches a box containing the most powerful magic in the world with one containing something decidedly less remarkable.

Will's mistake has tremendous consequences for Liesl and Po, and it draws the three of them together on an extraordinary journey.

Why I liked it:  The writing is gorgeous (which one would expect from Lauren Oliver); the language is luminous and lovely.  And the story is moving.  It reads like a fable or an original fairy tale (the plot hinges on several amazing coincidences). And despite the gloominess of the subject, there is quite a bit of humor. This is a very unusual ghost story because it's more about loss and grief and finding unexpected friendships than about scaring the reader.  In fact, Po is my favorite character.  It's nearly impossible to say much more about this book without spoiling the plot.  Just go read it!


Marvelous Middle Grade Monday is the brainchild of Shannon Whitney Messenger (and if you haven't congratulated her yet on her amazing book deal, hop on over there). Other regulars include (but are not limited to):
Shannon O'Donnell at Book Dreaming (and go congratulate her on her agent!)
Myrna Foster at The Night Writer
Sherrie Petersen at Write About Now
Natalie Aguirre at Literary Rambles
Brooke Favero at Somewhere in the Middle
Deb Marshall at Just Deb
Barbara Watson at her blog
Anita Laydon Miller at her middle grade blog
Michael G-G at Middle Grade Mafioso
Pam Torres at So I'm Fifty
Ms. Yingling at Ms. Yingling Reads
Danika Dinsmore at The Accidental Novelist
Jennifer Rumberger at her blog
Akoss at Nye Louwon--My Spirit

...for part two of this post.  If you've been reading my blog for a while, you know I'm a bookseller as well as a writer, and last Monday evening Richard Peck visited the store to sign his new novel Secrets at Sea. He was charming and personable and a true gentleman. His speech was funny and entertaining.

And yes he did talk quite a bit about writing.  He didn't start writing until he was 37 (which made writer Kim Wheedleton very happy).  He writes a book a year and has written 40 of them.  And believe it or not, he still writes all his books on an electric typewriter.  Richard said, "It has to look like a book" right from the beginning.  He writes each page six times, then when he thinks it's just right, "I take out another 20 words," because you can always take out 20 words.

The cure for writers' block, according to Richard Peck, is to just "stay at the desk."  He used to think he needed to go for a run, but that didn't solve it.   He also said writers should read the newspaper, because that's where a lot of his ideas come from. In fact, he spoke at length about Three Quarters Dead, his most recent YA novel (which creeped me out) and he said he got the idea from a news story about five teenagers who died in a car accident because the driver was texting.  You can imagine what he thinks about technology!  He also admitted he couldn't write it at night because it was too scary!

There aren't many quotes here because I didn't have a chance to take notes. When I'm in charge of a signing, I'm in full bookseller mode.  I'm there to ensure that everything runs smoothly and that the author and the audience are comfortable and happy.  (And if you're a writer and you're reading this post, I'll be that way when YOU get a book published and come to the store!)

He took the time to answer audience questions and then signed as many books as people wanted signed (some had heavy bags full!).  Here are a few pics (and thanks to Michael Gettel-Gilmartin for reminding me to take a camera).

After I introduced him, Mr. Peck started out behind the mic: 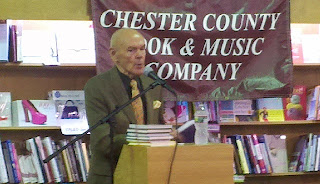 But then he quickly decided he didn't care for that, because he wanted to get close to his audience (which was a nice mix of excited kids and adult writers and teachers). 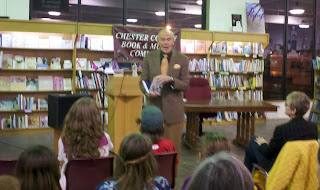 Afterward, he signed tons of books and posed for photos: 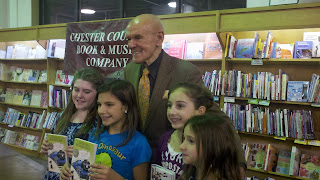 And when all the customers had left, he gladly posed with me: 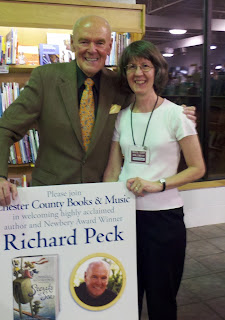 So, as a reward for reading this far and looking at my (*cough*) awesome pics, you get to enter a giveaway!  I have one SIGNED hardcover copy of Secrets at Sea (here's my review) to give away!

That means for the first time I will have two giveaways going on at once: this one for MG fans, and one for YA fans (see this post from Friday about A.S. King and Everybody Sees the Ants).

If you'd like to enter to win the signed copy of Secrets at Sea, simply be a follower and leave a comment. All ages may enter.  International entries welcome.  This giveaway will close at 11:59 pm EST Wednesday November 9, 2011.