Last week, when I posted my recommendation for Sparrow Road by Sheila O'Connor, you were kind enough to comment that it sounded pretty cool, although you mostly prefer exciting guy stuff with magic and neat inventions. Well, this book could be what you're looking for: 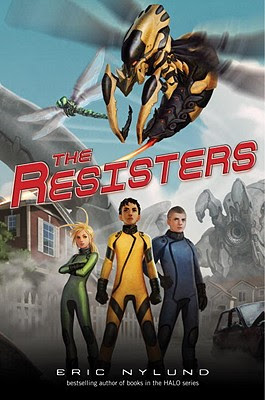 No magic here (well, maybe a little), but plenty of neat inventions and non-stop excitement.

Ethan Blackwood is the star of his soccer team.  But this isn't just any soccer team.  When he plays soccer, he plays it inside a 600-pound nuclear-generated exoskeleton.  Twelve-year-old Ethan lives far in the future, after World War Four, when the world is at peace and everyone speaks the same language. Kids compete for spots in the top high schools.  As soon as they become teens, they're whisked off to these prep schools.  Ethan has never questioned this.

But after his soccer game, Ethan is dragged away by two pale kids, Felix and Madison, who don't go to his elementary school.  They take him to a secret cave and show him three fighting suits that look like insects.  And they tell him an incredible story: fifty years ago Earth was taken over by the Ch'zar collective, an alien civilization that uses mind-control.  Everyone over the age of 13 is controlled by the Ch'zar.  For some reason, their mind control techniques don't work on kids.

Felix and Madison then ask Ethan to join them, using the flying wasp suit, and become a Resister.  Will Ethan accept the challenge?  Will he be able to handle it?  And what will happen to his thirteen-year-old sister, Emma, who's heading for prep school tomorrow?  What about his parents, who always tried to tell him to think for himself?

This is like a video game come to life (no surprise, considering the author is a head writer for Microsoft Game Studios and is best known for the HALO series).  Action-packed and highly entertaining.  I think you'd enjoy it.

Others who participate:
Shannon O'Donnell at Book Dreaming
Sherrie Petersen at Write About Now
Myrna Foster at Night Writer
Brooke Favero at Somewhere in the Middle
Go see what they're up to this week.
UPDATE: Natalie Aguirre at Literary Rambles is featuring a giveaway also!

Don't forget my GIVEAWAY!  Still going on, until Sun April 3.  Win an ARC of DIVERGENT by Veronica Roth.  Be a follower, leave a comment on that post.  Creative answers to my question (which faction in DIVERGENT would you join?) have a better chance of winning!