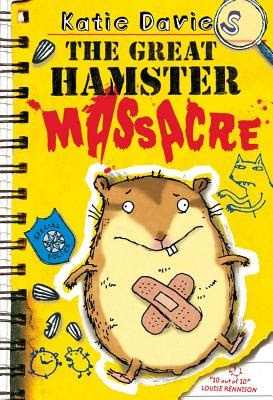 Coming May 3, 2011 from Beach Lane Books/Simon & Schuster: THE GREAT HAMSTER MASSACRE by Katie Davies, for ages 8 to 12.

With the word "massacre" in the title, you might not expect this to be funny.

Written as nine-year-old Anna's "What I Did On My Summer Vacation" essay, this is a breezy, hilarious, and touching British comedy of errors.  I laughed out loud more than a few times.  And the drawings by Hannah Shaw are terrific and very kid-like.

Anna and her little brother Tom desperately want a hamster.  Of course, their parents say no.  Anna's friend and next-door-neighbor, Suzanne, tries to help them in their quest for a hamster.  But the parents don't give in until something else happens (I won't spoil that part of the plot).  Mum even agrees to buy two hamsters, which the pet shop man swears are both female.

And you know where this is going.

But once the babies arrive, there's a tragedy.  (Well, duh, the title has already clued you in).  But after that, the already-fast pace really picks up as Anna and Suzanne, aided (hindered?) by Tom, start an Investigation into the Incident, complete with a digital recorder, a notebook, a magnifying glass and a list of rather colorful suspects.

One tiny quibble (and please keep in mind that I've read the ARC and not the final book): why didn't they stick with the British words!?!  (I talked about the charm of British middle grade books in this Dec 2010 review of BOOM!)

Thanks to my awesome sales rep, Tim Hepp, I have both a bound manuscript of the British version of THE GREAT HAMSTER MASSACRE (published in 2010) and an ARC of the "Americanized" version.  And I must say, Simon & Schuster, you should trust your readers to understand. Kids are smart. They'll figure out what a tyre is.  Biscuit sounds way more interesting than cookie.  And "Tom needed a wee" is even funnier than "Tom needed to pee."

Marvelous Middle Grade Monday was created by the inimitable Shannon Whitney Messenger.  She's back to posting about MMGM today! Yay!  Hurry on over there because she's giving away a signed ARC.  Our Second In Command is Shannon O'Donnell. I wish her well and hope she gets back to her regular MMGM posts next week. Others who regularly post MMGM reviews:  Myrna Foster, Ben Langhinrichs, Brooke Favero, Sherrie Petersen.  Go see what they're up to today!  Interestingly, Ben is reviewing a book that I reviewed here.   UPDATE: Kimberley Griffiths Little (a published MG and YA author!) has joined the ranks!

What middle grade marvels have you read recently?  And do you think 8-year-old American kids would like a book with all the British-isms intact?
Posted by Joanne R. Fritz at 9:53 AM