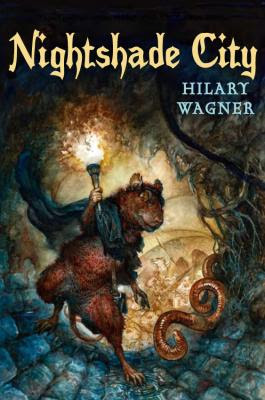 Just read a great middle great adventure story... about RATS!  Yep, that's right.  Normally, I would never go near a book about rats.  But this is packed with excitement and suspense and some memorable characters, who, well, just happen to be rats.

It's also the debut novel of a fellow blogger, Hilary Wagner.  And I think it's no coincidence that the cover boasts a blurb from Rick Riordan.  Just like THE LIGHTNING THIEF and the other Percy Jackson books, NIGHTSHADE CITY (Holiday House, October 2010, ages 9 and up) starts with action on the very first page.   There's none of the boring background information so many novelists feel they have to force on us.  Vincent and Victor Nightshade, orphaned brother rats in an underground city of rats, are on the run from the High Minister's nasty lieutenant, Billycan.  They find refuge with a group of rebel rats who knew their father. There will be strategy and conniving and lots and lots more action.  There's even a cute and clever girl rat named Clover. And I must add my deep appreciation for the character of Mother Gallo, an older female rat who has an important role to play in the upcoming battle.

If you're a fan of the Redwall series or other animal fantasies, you should burrow into this book.  Look for Nightshade City at your local indie bookstore.