Has the golden age of the picture book for children passed?
Wow.  Not a good time to be writing picture books?  Shelf Awareness goes on to quote a New York Times article  which suggests not only that the economy is at fault, but also that picture books are no longer being purchased by parents who want their kids to read "big-kid" books at increasingly earlier ages.
I see this as a disturbing trend.  Picture books have always been and will always be enjoyed by kids and parents (or grandparents) together.  There should still be several years of picture book enjoyment between the board book and the Early Reader.  Sometimes there's nothing more comforting than snuggling on Mom or Dad's lap while being read to.
Of course, the New York Times article also goes on to say:
"...perennials like the Sendaks and Seusses still sell well — but publishers have scaled back the number of titles they have released in the last several years, and booksellers across the country say sales have been suffering."
I guess I'm lucky to work for a bookstore which still sells oodles of picture books (and not just Seuss and Sendak) to parents, grandparents, teachers, librarians, and others who appreciate them for the stories and the artwork.  Yes, we sell fewer than we did five or ten years ago.  But they still sell. 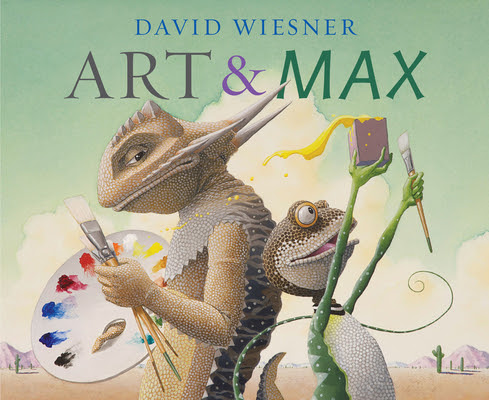 Case in point:  the new David Wiesner book is called ART & MAX (Clarion Books, Oct 2010).  And it's sheer genius, just like Wiesner's other books.  The Caldecott committee may as well just hand him the medal now!
Will picture books survive?  The article doesn't even mention the looming spectre of the e-book, but it seems to me that picture books are one genre that still need to be produced as physical books you can hold and share with a child.  What do you think?
Posted by Joanne R. Fritz at 9:22 PM