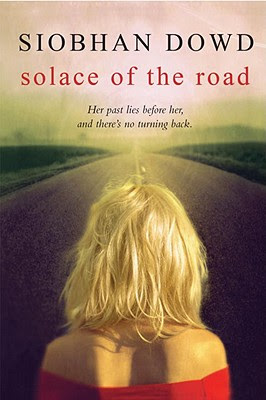 "You can't think all your memories at once or your head will burst."

Oh, this is such a lovely story and so beautifully written, it hurts that Siobhan Dowd died tragically and too young (age 47) after completing this novel. We'll never know what wonderful novels she might have written. Her first novel was A Swift Pure Cry. She also wrote The London Eye Mystery.

In Solace of the Road, we meet Holly Hogan, a foster kid in London who is so full of anger that her caseworker has to teach her to kick the mattress instead of breaking things. With masterful plotting, Dowd doesn't reveal the heartbreaking reasons for Holly's anger until near the end of this road trip story.

Holly's 14, almost 15, and hates her new school and her new foster family. Fiona and Ray mean well, but they talk too much and ask too many questions. They wanted to have kids of their own, but couldn't because Fiona had ovarian cancer.

When Holly finds Fiona's blond wig in a closet, she puts it on and realizes she looks older in it. Old enough to go on the road, to leave London and hitch rides all the way to Ireland. What's in Ireland? Her real mother. The one she lived with when she was little in an apartment building Holly calls the sky house.

This amazingly-crafted novel, disguised as a simple road trip story, is actually about the tricks your brain can play on you as you sift through childhood memories. On the road, Holly meets a variety of eccentric and sympathetic characters, including a vegan truck driver, a night nurse and a pig farmer. In talking to them, Holly begins to dig down through the complicated layers of her past memories and eventually learn what really happened in the sky house.
Posted by Joanne R. Fritz at 9:44 PM