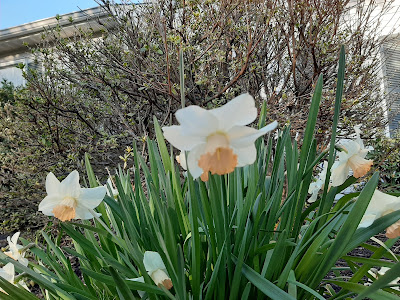 Monday, April 20 (Day 40): Tried to put in my next grocery order and couldn't get a delivery window. The drop-down menu only went up to Sunday May 3rd, and each time slot was taken. I'll have to try again tomorrow.

On our walk today, the sun was shining, even if it was still cold. I'm grateful that our daffodils still look fresh when everyone else's are turning brown. And I love how green everything is getting. 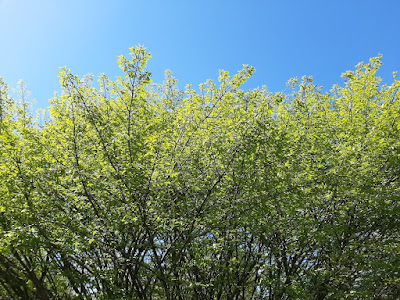 Chicken on the grill for dinner, and we opened our last bag of frozen peas. Don't know why I didn't order any last time. It's hard to think two or three weeks ahead when you're used to buying for a week at a time. If our seeds ever arrive, we'll be planting peas (a little late, I know. You're supposed to plant peas and potatoes in March, right?). We also plan to grow tomatoes and peppers and maybe carrots.

We watched the last episode of Anne With an E on Netflix. Sad to see it end (and they never finished one minor character's storyline, since the show was canceled after three seasons).  Yes, they took great liberties with L.M. Montgomery's novels, and I'm sure purists were horrified, but we both enjoyed the show. Adding diverse characters gave it a richness that only made it more interesting.


My favorite character was Marilla. What astonished me was how much her character changed and grew, more than any of the others. Anne was always open-minded from the beginning, and Matthew in his quiet way was also open-minded, but Marilla went from being a rigid, closed-minded person who was overly strict with Anne and who was afraid of people of color, to a much more broad-minded and friendly person.

Here's what really astounded me: the actress who played Marilla was the same actress who played Queen Mary in the Downton Abbey movie! And I had no clue the entire time I was watching Anne With an E.  I didn't think to look up any of the actors on IMDB until after the show ended.

Tuesday, April 21 (Day 41): Rainy day. Up at 7:15 and put in my grocery order. This time I could choose a delivery time slot for Monday May 4th -- again, the earliest one, starting at 6:30 am! That was the only one available so I grabbed it.

Did some laundry. Read for a while. Still reading The Raven King by Maggie Stiefvater. Also spent far too much time on Facebook, as usual. Starting to hear of more and more friends who know someone with the virus or even, tragically, have lost someone because of this awful virus.

Ham and sweet potatoes for dinner. This ham will last us for many dinners!

Watched Star Wars: The Rise of Skywalker, which my sons ordered for me for my birthday. It was entertaining, even if it's not the best SW movie. A wonderful escape from reality, for sure. 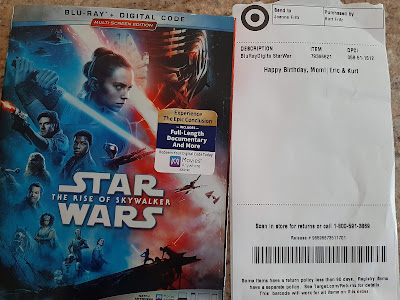 Wednesday, April 22 (Day 42): Earth Day! Believe it or not, I remember the first Earth Day in 1970. I was in high school and we had an assembly instead of classes. I was so inspired to save the Earth, I walked home from school instead of taking the bus. And I picked up trash along the way.

Today, of course, we're dealing with a lot more than trash along highways. The Great Pacific Garbage Patch is still a huge issue. Plastic crams our landfills and clogs the ocean, killing sea life. And there's too much carbon, causing climate change. Anyone who thought climate change was a hoax only needs to look at before and after photos to see how much cleaner the air in major cities is now because no one is driving!  Los Angeles, famous for its smog for decades, now looks like this:

Also for Earth Day, here's a link to an article from The Guardian about a mutant enzyme that recycles plastic bottles in hours! Honestly, when I first saw this headline, I thought it was from the Onion or some other satirical news site! A mutant enzyme sounds like trouble to me.

This reminds me of Amy Sarig King's MG novel, ME AND MARVIN GARDENS, from 2017. Anyone looking for a great MG read, look no further! Obe Devlin finds an unusual creature that eats plastic!


Thursday, April 23 (Day 43): Finally finished reading The Raven King by Maggie Stiefvater. Fascinating and gorgeously written, with an ending I did not quite expect. But the characters all grew on me throughout the four-book Raven Cycle.

Finally, it arrived! I pre-ordered this book way back in March, the official pub date was April 14th, and it just arrived yesterday! Perfect timing, since I just finished The Raven King. My other books will have to wait, because there's no way I'm putting off reading this. I've known Ilene for years and have been proud to call her a friend.

And reading is my favorite form of escape these days...

Some writers feature a poem a day on their websites. Some write a poem a day. I like to read a poem a day. Here's one great blog that does that, Gotta Book, by Greg Pincus. And here's my spine poetry, made from YA novels in my collection!


Macaroni and cheese with ham chunks for dinner. One of my husband's favorite meals (not so much mine, but, hey, it's food and it fills you up!). We watched an episode of Monty Python's Personal Best on Netflix.

Interestingly, the countries affected are the same as the last few weeks. That stat was 209 on April 9th and has been 213 ever since. Is that a good sign? Not sure. How many countries are there? The UN appparently recognizes 241, including territories. I had no idea there were so many countries in the world. Did you?


And, how do you live now?  Tell me in the comments (it doesn't have to be poetry, just a few words about your current life). Thanks!