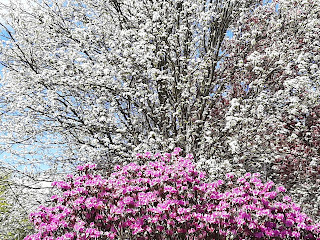 Monday, April 6 (Day 26):  On our walk today, I tried to take lots of deep breaths and appreciate the beauty surrounding us. So grateful to live in a neighborhood where we can take walks like this. 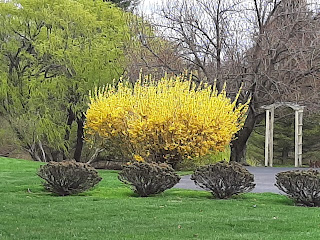 And finally, our own daffodils are blooming! Took long enough.

Decided I'd better put in another grocery order, knowing it might take a while. It will. This order won't be delivered until April 18th! Glad we bought a big box of rice in early March, and six cans of beans. I am grateful the delivery is less than two weeks from now. Also, I'm lucky to be able to afford delivery and a tip for the driver (all done online of course). They deserve every cent. Essential personnel, indeed!

Please remember to donate to your local food bank, if you haven't already. Some people really are struggling to feed their families during this crisis.

When Jason Reynolds, the national ambassador for young people's literature, asked his Twitter followers last week if they needed groceries, he was flooded with requests. He helped as many as he could, and then other authors stepped in to help. "Just be a human," he said. "People are struggling. More people than we can even imagine."

I've never met a kinder group of people than the children's authors I know. Kindness counts!

Tuesday, April 7 (Day 27):  Talked to my 92-year-old mother on the phone, as I do often. She lives an hour away, in a retirement/nursing home (one of those three stage places that takes care of you right up until death! It's always been depressing for me to visit her there, even though she's still in Independent Living). And of course they've been on lockdown since mid-March. I can't even wave at her through the window (the way Max Brooks waved to his 93-year-old dad, Mel Brooks, in March), because I wouldn't be able to get past the guardhouse at the entrance.

Here's what I couldn't bring myself to talk about on this blog last week: four of the residents of the home where my mother lives tested positive for the virus last week.

The week before, it was one staff member who tested positive (and, thankfully, was sent home to quarantine herself for two weeks). But the trouble with testing is, by the time you show symptoms, you've already been contagious for about 5 days, right?

Now, as of today, there are 13 residents with coronavirus. Thirteen! That's more than tripled. This is frightening. They're all in the nursing wing (where my father spent the last two weeks of his life in 2014) and the facility is making heroic efforts to keep it from spreading to the other wings.

I'm distraught, as you can imagine. You may remember hearing about the nursing home in Washington state, where the virus spread like wildfire. Forgive me if I'm not exactly cheerful this week.

Wednesday, April 8 (Day 28):  Woke up with an aching jaw again. Can you blame me? I realize many people have already lost a loved one to this terrible virus. My heart goes out to you.

Another walk and our cherry tree in full bloom cheered me up somewhat. You might be able to tell that our beloved tree is dying slowly. Lots of empty branches. It used to have way more blossoms than this. But it's still gorgeous. 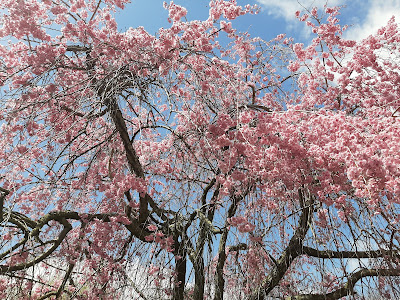 By evening, I was a little calmer. We started watching Anne with an E on Netflix two days ago, and we're both enjoying it (even my husband, surprisingly!). We were privileged enough to visit Prince Edward Island in 2011. Not sure if we'll get through all three seasons of this beautifully-acted and superbly-written show before it disappears from Netflix, but for now, it's a lovely escape from reality. Which we all need!

Thursday, April 9 (Day 29): My husband is the religious one in the family, and this is Holy Week. So it's now Holy Thursday and tomorrow is Good Friday. He still has trouble with the idea of going to church online, although they seem to have fixed their microphone problem (he couldn't hear the priest the first Sunday).

This is one of the most surreal, unprecedented aspects of this pandemic. It's not just that all sports are canceled. Churches, synagogues, and mosques have all had to cancel in-person services. Even the Amish, one county over from us, have had to stop their every-other-Sunday local gatherings in one member's home.

Still shaking my head that in late March the President wanted everything open and everyone back out there by Easter. I don't usually get political on this blog and right now I'm trying to restrain myself from saying nasty things about an administration that has made serious mistakes all along. No, he didn't cause the virus. Of course not! But his hesitation and missteps undoubtedly made it worse in the US. His top trade adviser warned him in a January 29th memo that more than half a million Americans could die as a result of this virus. On January 30th, Trump said, "We think it's going to have a very good ending for it. So that I can assure you." On February 28th, Trump said, "It's going to disappear. One day, it's like a miracle, it will disappear." Right.

For more of Trump's actual words all through February and March, see this article from the Washington Post.

Nothing seems more important to him, than him! More recently, although he finally admitted the virus is serious, he also bragged about the ratings for his news conferences, as if this pandemic is a reality TV show! Grrr... I refuse to watch them.

Friday, April 10 (Day 30): Yes, we've been isolated for 30 days. Boggles the mind, doesn't it? And I still haven't cleaned my entire house. I think I was too ambitious in the beginning. I didn't account for a complete lack of motivation at this point. And I'm often overwhelmed with the desperate feeling that life is never going to return to normal.

An update on my mother's nursing home: As of today, there are now 24 cases in the Skilled Nursing wing. None in Assisted Living or Independent Living. Ten employees are now home with the virus. And there have been three deaths of residents, two of whom were in hospice before the crisis started. If it keeps doubling or tripling every week... 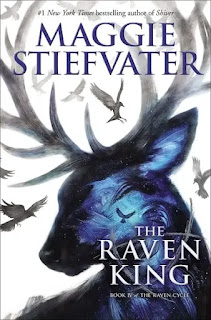 The Raven King by Maggie Stiefvater. I'm about a third of the way through. It's an ideal contemporary fantasy escape. But if you haven't read the first three books, start with  Book 1, The Raven Boys. Each boy is perfectly human, yet has a different talent or ability. Then they meet up with Blue Sargent, a high school girl with the ability to amplify anyone else's talent. Fascinating! 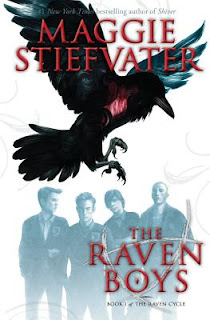 And remember, you can check the predictions for your own state (or country! I recently realized you can choose other countries from the drop-down menu; scroll up above the US) at this website. Note that in Italy, Spain, and France, the deaths per day are going down! They're doing social distancing properly.

Do you have a loved one with the virus?

Are you having trouble staying stocked with food and necessities?