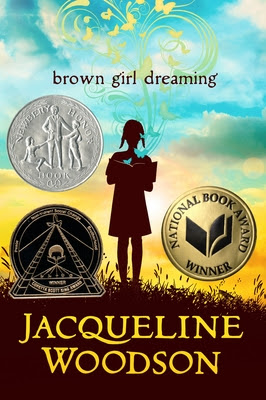 Synopsis (from Indiebound): "Jacqueline Woodson, one of today's finest writers, tells the moving story of her childhood in mesmerizing verse. "

Raised in South Carolina and New York, Woodson always felt halfway home in each place. In vivid poems, she shares what it was like to grow up as an African American in the 1960s and 1970s, living with the remnants of Jim Crow and her growing awareness of the Civil Rights movement. Touching and powerful, each poem is both accessible and emotionally charged, each line a glimpse into a child's soul as she searches for her place in the world. Woodson's eloquent poetry also reflects the joy of finding her voice through writing stories, despite the fact that she struggled with reading as a child. Her love of stories inspired her and stayed with her, creating the first sparks of the gifted writer she was to become.


Why I recommend it: I first discovered Jacqueline Woodson when I read her picture book, Coming On Home Soon, in 2004, and later her MG novel, Feathers, in 2007. Both were books I loved and championed at the indie bookstore where I worked. I found Jacqueline's writing to be gorgeous and poetic. So it's not surprising that she chose to tell the story of her own childhood in verse. In breathtaking, yet spare poetry, we get to know the child Jackie, her family, and all the elements that shaped her into a writer. It's inspiring and deeply moving.

But don't just take my word for it. Look at that cover image. This book has so many awards they barely fit! And they're all well deserved. Winner of the Coretta Scott King Award, the National Book Award, and a Newbery Honor book.

Favorite lines: (from a poem called "The Garden" on page 48)

My southern grandfather missed slavery
by one generation. His grandfather
had been owned.
His father worked
the land from dawn till dusk
for the promise of cotton
and a little pay.

So this is what he believes in
your hands in the cool dirt
until the earth gives back to you
all that you've asked of it.

What Coretta Scott King award winners have you read or do you want to read?