GOING WHERE IT'S DARK by Phyllis Reynolds Naylor 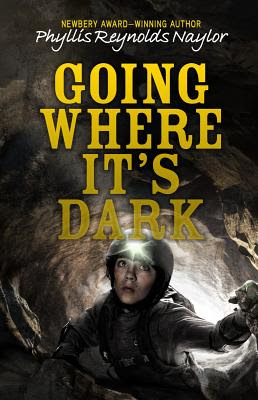 Synopsis (from Indiebound): Buck Anderson's life seems to be changing completely. His best friend, David, has moved away; his anxious parents are hounding him more than ever; he has reluctantly agreed to fill in for his uncle and do odd jobs for a grumpy old veteran in town; and his twin sister has a new boyfriend and is never around anymore. To top it all off, Buck is bullied by a group of boys at school mainly because he stutters.

There is one thing that frees Buck from his worries. It is the heart-pounding exhilaration he feels when exploring underground caves in and around his hometown. He used to go caving with David, but he's determined to continue on his own now. He doesn't know that more changes are headed his way, changes that just might make him rethink his view of the world and his place in it.


Why I recommend it:  Buck emerges as a very real and likable thirteen-year-old boy, who happens to stutter. I also found it refreshing to read about a large and loving family with two parents, which seems rare in recent MG literature (or is it just me?). The caving adventures add a level of excitement. My pulse raced when I reached the part where the bullies drop him in the pit and he has to find a way out on his own. I think I read the last third of this book without taking a breath.

Favorite lines: "Everything he'd heard from outside the kitchen made him sick to his stomach. The pity in their voices, the way they predicted how the rest of his life would be. He hated his mouth, his throat, his tongue, his face."  (from p. 102)

Bonus: This is the second novel I've read about a young teen who stutters. The first was Tending To Grace by Kimberly Newton Fusco (reviewed here).  The two styles are quite different but both books have much to offer the reader. Each of my sons had speech disorders in elementary school, and speech therapy made a huge difference in their lives. Teachers and librarians: this book would be excellent for helping students empathize with kids who have speech disorders.

Phyllis Reynolds Naylor is the author of more than 140 books, including Shiloh, the Alice books, The Boys Start the War, The Girls Get Even (and many more Boy-Girl Battle books). Read more about Phyllis at randomhouse.com.

Readers, do you know of any other MG novels about stuttering? Or about caving?