Marvelous Middle Grade Monday is the brainchild of Shannon Messenger. Be sure to visit her blog for links to other MMGM posts. Today, for National Poetry Month, I'm recommending Caroline Starr Rose's Blue Birds. 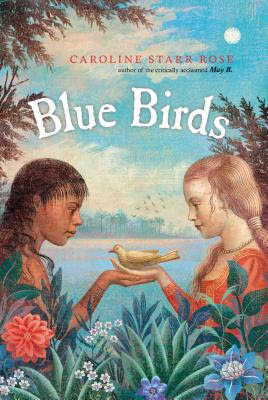 Synopsis (from the publisher): It’s 1587 and twelve-year-old Alis has made the long journey with her parents from England to help settle the New World, the land christened Virginia in honor of the Queen. And Alis couldn’t be happier. While the streets of London were crowded and dirty, this new land, with its trees and birds and sky, calls to Alis. Here she feels free. But the land, the island Roanoke, is also inhabited by the Roanoke tribe and tensions between them and the English are running high, soon turning deadly.

Amid the strife, Alis meets and befriends Kimi, a Roanoke girl about her age. Though the two don’t even speak the same language, these girls form a special bond as close as sisters, willing to risk everything for the other. Finally, Alis must make an impossible choice when her family resolves to leave the island and bloodshed behind.


Why I recommend it: This book is gorgeous. And I'm not just talking about that beautiful cover. With the two voices of Kimi and Alis, young girls from different cultures who nevertheless form a lasting friendship, Caroline Starr Rose has created a novel in verse that is more like two sweet voices singing. They sing of bluebirds, the sun, and the sky, they sing of the fragile tendrils of friendship, and they sing of the many hardships in their lives. Before I was a third of the way through this I'd forgotten I was reading a novel in verse and I was simply pulled in by Kimi and Alis and their story. Despite the thickness of the book, I read this in one day. At the same time, I didn't want to leave their story, and it has stayed with me for weeks now. I had far too many favorite lines to choose from, but in this example, from p.192, you can see how every word counts:

In my mind,
there are no barriers.
My words and hers
make perfect sense between us.

Bonus: This would be excellent for classroom discussions. Includes an Author's Note with historical information.


Caroline was kind enough to take time from her busy schedule to answer three questions:


1)    The dual point of view works so well here; it's almost like singing in two voices. What made you decide to write the book this way?

Thank you so much!

Having Alis and Kimi share the story was not my original plan. But once I realized Blue Birds hinged on their forbidden friendship, I knew I couldn’t tell just one girl’s side of things. And that sort of terrified me. There are some people within the writing community who feel you must live a culture in order to write about it. I’m a non-Native author. What right did I have to speak for a Roanoke child? I had to trust my ultimate qualifications came from having once been a child and from my understanding of the beauty and security that thrives in friendship. Once I got to this place, each girl’s voice felt distinct and clear and strong.

As far as verse goes, I find it a really in-the-moment way to write historical fiction. It’s immediate, spare, and lets us into a character’s inner life very quickly. For Blue Birds, verse became a wonderful way to tell a story in two voices. Readers move quickly from Kimi to Alis and back again. And when the girls share a poem, I was able through line and stanza placement to “speak” their story visually, adding one more layer of communication. Verse is magical that way!

2) My favorite parts were the shared poems. Was BLUE BIRDS harder or easier to write than MAY B.?

Much harder. Because it was the first novel I wrote after publishing a rather successful first book, I had an invisible audience I had to learn to ignore. The stakes felt higher. I worried about comparisons between May B. and Blue Birds.

The process was also very different. For May B., I was only responsible for being familiar with an era. With Blue Birds, I had to learn about an era, an event with spare records, and two Native American tribes that no longer exist. This is the first time I’ve included real people from history in something I’ve written. While they only had minor roles, it felt like a big responsibility. Then added to this was the realization the story needed to be told in both girls’ voices. I felt utterly unqualified to write as a Native American child.

3) I think you did an excellent job. Are you a "pantser" or a "plotter" or something in-between?

I fall somewhere in between — a plotster, as a kid during a school visit once dubbed me.

I start with a historical event or era that interests me and read broadly, trusting some sort of story idea will bubble up to the surface in the midst of my research. I keep a notebook filled with quotes, questions, maps, lists, and the like. I need a firm sense of my setting and a general sense of my key characters before I begin (though these things often change). Writing at this point feels a bit like a science experiment: This setting + this character x this event = this outcome. Before I begin, I have a sense of some key turning points. Often I know the final scene but have no idea how to get there.

Then I draft painfully and slowly. I fret a lot. I’m sure I’m a fraud. I have the awful habit of comparing my fledgling ideas to my finished work and easily convince myself I’ll never be able to do it again. This is when I lean hard on my writing friends who tell me they believe in me. I borrow their belief and keep moving forward. Getting to the end of a first draft is a relief. Even if it’s awful, even if I trash half of it, the “making something from something” stage is infinitely less scary than the “making something from nothing” stage.

Thank you, Caroline! You are definitely not a fraud. And I feel the same way about first drafts. What about you, readers? Do you fret over a first draft and enjoy revision? Or the opposite?