First, I have a winner to announce in the ACTUAL & TRUTHFUL ADVENTURES OF BECKY THATCHER hardcover copy giveaway. According to randomizer, the winner is:


Congratulations! And expect an email from me asking for your address. And thanks again to author Jessica Lawson for generously offering the giveaway copy. 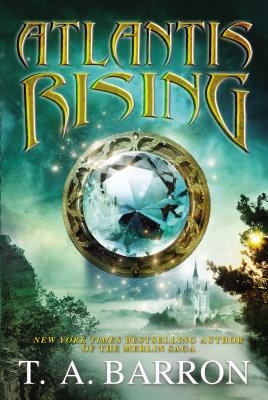 Source: review copy from the publisher in exchange for an honest review


Synopsis (from the publisher): In a magical land called Ellegandia, a young boy named Promi scrapes by, stealing pies, cakes and sweets to survive. But little does he know that his country is a pawn in an ages-old war between good and evil, battled both in the spirit realm and in the human world. Harboring secrets of his own, Promi teams up with a courageous girl named Atlanta and the two vow to save their land—and each other—no matter the cost. But their vow has greater repercussions than they ever could imagine—in fact, it may just bring about the creation of Atlantis, an island cut off from the rest of the world, where magic reigns supreme.


Why I recommend it: I love T.A. Barron's The Lost Years of Merlin and I've had the privilege of meeting Tom Barron (twice!), so I may be a wee bit prejudiced here, but I'm awestruck by the sheer scope of his imagination. Plenty of authors have written about the destruction of Atlantis, but only a storyteller like T.A. Barron would think of writing about its origins.

Not only is Barron a magician with words but he also shows a deep respect for our planet. His love for nature shines through in his descriptions of the forest, the flowers, and the animals. His characterization is also noteworthy. Promi's a thief who steals food, including, one day, a lemon pie. But then he sees a girl in the city who's weak from hunger and he gives her the entire pie. That girl turns out to be Atlanta, who wants to save the forest from an unknown blight, and Promi has to change his ways to help her. Writers, study this one to learn how to make characters likable.

I did find the first half of the book a little slower than the second half, but if you like your fantasy long and colorful and with plenty of both action and description, this book's for you. Fans of The False Prince will enjoy this.